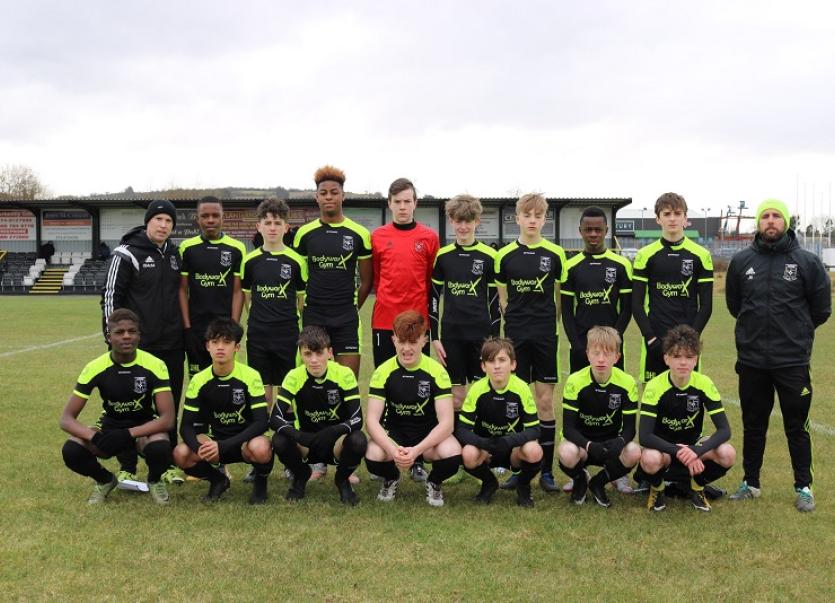 Letterkenny Rovers pulled off a top notch scalp today when a strong disciplined committed display saw them frustrate Dublin kingpins Crumlin before finally going through in the lottery that is a penalty shootout to reach the SFAI Cup U-15 semi-finals.
The sides were deadlocked at 0-0 after an absorbing encounter in bitterly cold conditions in front of a decent attendance at Leckview Park.
Rovers netminder Killian Gribben was the busier of the two keepers particularly in the opening exchanges and and made two super stops to ensure the sides went in level at the break.
The home side defended well and stuck to a rigid defensive shape and that reaped dividends and they almost created a goal of their own only for Nathan Bonner to be denied by visiting netminder Evan Meenan.
Meenan was injured in the incident and had to be replacd shortly afterwards.
Rovers rattled the crossbar through the highly impressive Josh Patton with just 5 minutes to go but it was Crumlin who thought they had won it very late in normal time only for Gribben to keep Rovers hopes alive after a tremendous save from Glory Averbaum.
Extra-time came and went and again chances were at a premium and there was an air of inevitability that penaties were to be required.
Crumlin went first and scored their first three through Scott Clery, Ollie Kendrick and Kyle Murphy while Rovers also scored their opening three with strikes from Patton, sean McGinley and Kenny Alum.
Gribben then saved a tame effort from Adam kelly so it was advantage to the Donegal men and further strikes from James Gallagher and the winning effort from Adam Yisau ensured a famous win.
Both sides went into the game having lost players to senior sides in the Airtricity underage ranks but Rovers manager James Bonner was beaming with pride afterwards at the performance, determination and bravery of his young charges who grabbed the opportunity and they now have a last 4 clash away from home against either Peake Villa or St Kevins Boys.