ST. CATHERINE'S PROMOTED BACK TO PREMIER 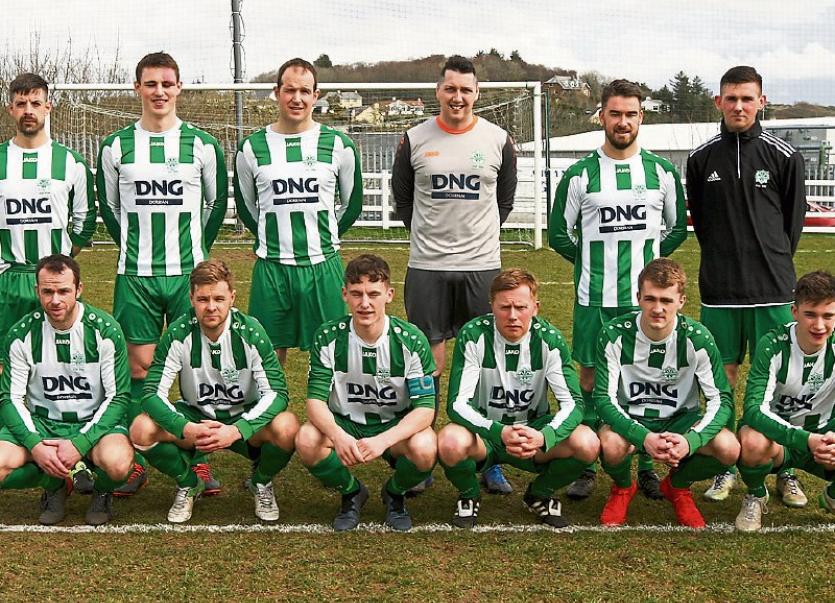 St. Catherine’s are back in the Premier League after getting the win needed against Ballybofey at Emerald Park. In the end it was a facile win for the Killybegs men. They can clinch the title next week at home to Bonagee.

Keadue Rovers kept their promotion hopes on track with a big away win at Convoy Arsenal.

Castlefin Celtic were winners in the Premier Division to keep their hopes alive of the title.

Kildrum advanced to the final of the Brian McCormack Cup after this victory over Drumkeen. Kildrum went ahead in the opening minutes of the second half when Damian Crossan fired home from inside the box.

After a number of chances, tThe home team did get their equaliser when the Guthrie brothers combined as Lee did well to set up younger brother Michael who calmly finished past keeper Friel.

The visitors again took the lead with ten minutes left. They were awarded a free kick on the edge of the box. William Lynch took the free which deflected off the wall and into the bottom left hand corner giving McCauley no chance. .

Overall the home team acquitted themselves well against their Premier League visitors who will now go on to meet Kilmacrennan in the Final. Drumkeen will now turn their attention back to league matters and a potential League decider away to Cranford next week.

Both teams were affected by missing players but that didn't put a dampener on the quality of football played. Both teams created chances in the first half, but it was the home side that made the most of theirs, with great link up play from Michael McLaughlin and Timmy Burke to put James Doherty through on goal, and he made no mistake finding the back of the net, despite Cappry’s keeper getting a hand on the ball. Kilmacrennan got their second when Ryan Shields came out on top after a goal line scuffle and put the hosts two up at the break.

Castlefin defeated an understrength Milford in Moyle View. It was 1-0 at halftime after JP Malley scored. Castlefin added three more in the second half through Foy, Malley and Ward

Glenea went ahead on 40 minutes when Rathmullan failed to deal with a long throw and Sean McBride flicked the ball home. Glenea doubled their lead on 50 minutes when Ray Tannelly reacted quickest to a loose ball in the box and slotted home from close range. Rathmullan pulled a goal back almost immediately when Kevin Doran got onto a through ball and home.

Rathmullan equalised on 89 minutes when Ryan Connolly got onto a through ball and his shot found the far corner.

Best for Glenea were Dean Gallagher, Lee O’Brien and Kyle Mc Mullan, while Deejay and Declan Mc Garvey were best for Rathmullan.

The big derby game ended with honours even as Drumoghill and Lagan Harps played out a scoreless draw in wet conditions at The Moss.

Both sides had chances but it was a day when defences were on top.

St. Catherine’s got the win needed to secure promotion and they did it in style at Emerald Park. Goals from Ryan Farrell, Daniel Breslin, Brendan McGuire had them three up on 10 minutes and the goals flowed from Breslin, McGuire, Breslin (penalty) and Donal McGuire.

Conor Rodgers had a consolation for the home side.

This was another one-sided encounter. Goals for the home side came from Mark Neeson, Ross Porter (3), Jude Patton (2) and Paul McNulty.

Sean Little had the only goal of the first half and he also added the second to kill off any hopes the home side had.

A beautiful day in Tymeen started a feisty affair from two teams who always bring out the best in each other. Letterbarrow started strongest and soon capitalised when Alex Mc Nelis slotted home a well worked goal. Deele responded however and began the second half strongest and brought the game back level going into the final quarter.

Conor McDaid put the home side back in front, converting an exquisite cross from Paddy Ward. Deele scored late on to level the tie again and that’s how it finished. Best for Letterbarrow were Barry Jordan, Paddy Ward and Conor McDaid with Deele’s left back performing well for the visitors.

Cranford got the win they needed over a very competitive Gweedore side to keep their outside hopes of the league title going.

The goals came in the second half with Chris Duffy turning home a McGinty cross on 60 minutes. Cranford wrapped up the three points when Danny Mc Bride did great work down the left hand side and played a lovely ball in for Kevin Doherty to power home a header.