St. Catherine's joint manager Daniel Breslin delighted to be going up as champions 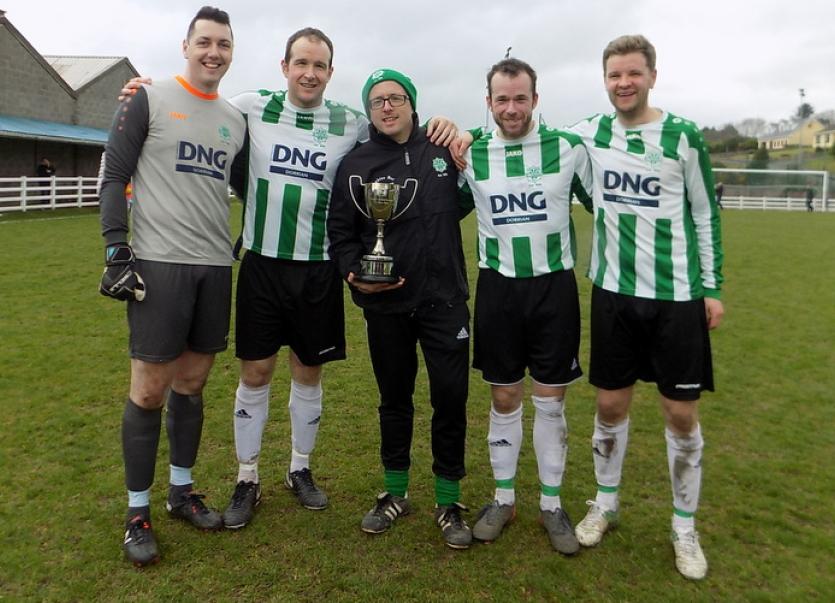 The St. Catherine's management team with the cup

Saints stalwart Daniel Breslin was delighted to give the faithful something to cheer about at the weekend.
Breslin netted a brilliant volley in the first-half and was a real leader throughout for the winners. He admitted that Bonagee probably deserved more from their visit to Killybegs.
He said: “Bonagee are a solid side. We knew what to expect. We got a wee bit of luck thank god. It could have gone either way today. It was that close. A share of the spoils might have been the fairer result. But like I said, we had that little rub of the green. You take your luck when you get it.”
St. Catherine’s appeared to be on their way when the 2006 Premier League winning captain netted. But carelessness and a lack of attention allowed Utd a route back into it. Breslin also signalled out stopper Michael Mullin for special praise after a stunning second-half save prevented Bonagee from taking the lead.
“After the first goal we just switched off,” he added. “It was careless. Michael has been pulling us out of holes all year to be fair to him. But he saved his best for today. It really was a super stop. He’s a class keeper. It was a big factor in the result.
“We’re delighted. The main aim was promotion. Our biggest aim this season was that and to blood some youngsters. There are lads there that can’t go on forever. So we feel we’ve achieved all that. And to also get our hands on the league title is just brilliant.
“That energy, those fresh legs, the club needs that. It’s good to see it is there and it is coming.”
Some familiar faces down through the years flooded the pitch afterwards. They were beckoned into the winning team pic by Breslin and a number of others veterans like David Conwell and Christopher Murrin. It was a nice gesture.
Breslin explained: “Yeah, everyone here has huge smiles this afternoon. It’s great for them all too. My own father travels every week. So many of them do. They all joined in in the end there for the pictures. That was great.”