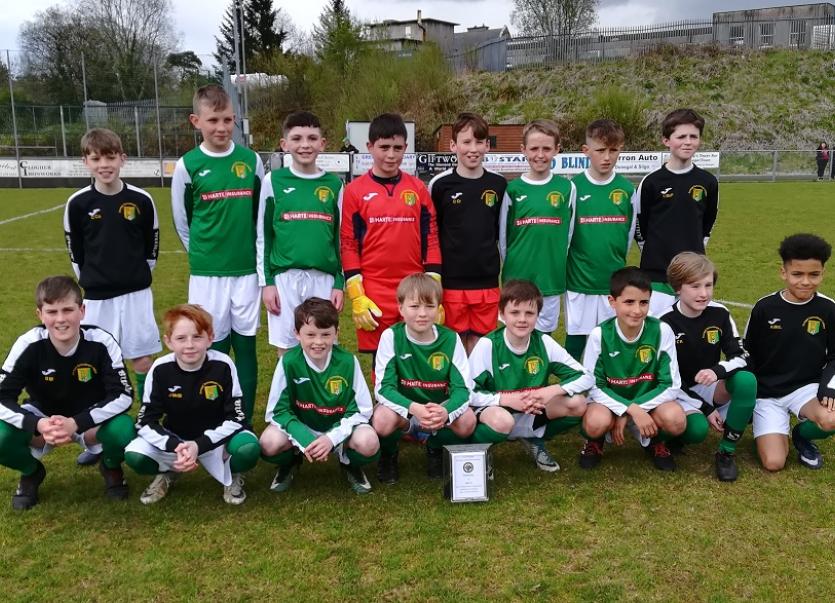 Donegal U-12s pictured before their game in Donegal Town

A very talented Donegal Schoolboys U-12 side bowed out of the National Cup at the semi-final stage this afternoon against a strong Mayo League in the Hospital Field, Donegal Town.

It was tough to take for this young team who competed so well against a very strong Mayo League side.
Indeed, they had claims for a winner in the last minutes of extra-time when the ball bobbled around in the Mayo goal area following a corner and there were strong claims on two occasions that the ball had crossed the Mayo line.
What made it so tough on Donegal was that they held a lead for almost all of the 60 minute game. They went ahead on four minutes when the lively Sean Patton got in behind to cross and Tiarnan McGinty swept the ball home with aplomb.
Both sides had chances with Mayo centre-forward Owen Elding causing Donegal plenty of trouble but James McAteer was steady as a rock.
Oisin Harkin almost doubled the Donegal lead after good work by Eoghan Scott as Donegal went for the half-time break 1-0 ahead.
The 'Usain Bolt' of the squad, Aaron McLaughlin, came in for the second half but it was Olding who had a great chance for the visitors, slicing his effort wide. From McLaughlin's first run, Oisin Harkin was just wide, while at the other end Elding continued to cause problems, but he fired two high over the Donegal goal.
Tiernan McGinty was a real driving force for Donegal right through the game and one of his runs saw Conor Kelly in support and he had claims for a penalty turned away.
But just when it looked as Donegal would hold on, a long delivery from the Mayo defence found Elding and this time he found the corner of the net with a great finish.
And so it went to extra-time. McGinty created an opening for Eoghan Scott six minutes into the opening period and then disaster struck right on the stroke of half-time in extra-time when a corner was not cleared and Adrian Sotoparra found the net with his knee.
The Donegal response was great with Sean Patton back on and just three minutes into the second period Patton was involved as Eoghan Scott fired for goal. The 'keeper got a hand to it but dropped into the net for the equaliser.
Donegal had the best chances with that aforementioned claim that the ball had crossed the line while Sean Patton had an effort that was straight at the 'keeper.
Then it went to the dreaded penalties and Mayo prevailed, taking an early lead before their sharpshooter Elding missed. Tiernan McGinty converted for Donegal and Eoghan Scott gave them hope but Mayo closed it out when Gavin Ferry converted their fifth spot kick.
It is a cruel way to decide a competition, but the Donegal lads can be really proud. All of them performed really well with McAteer and McGinty outstanding.