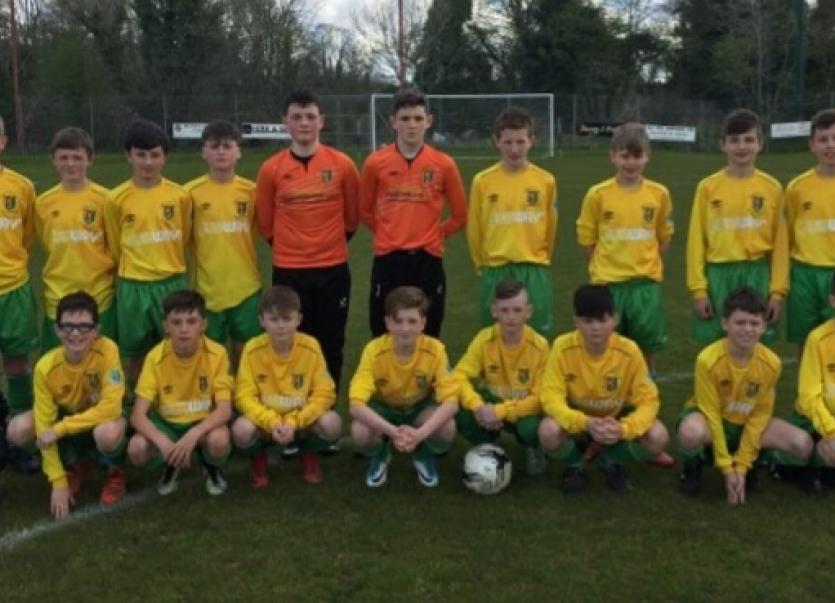 Donegal U-13s, after a bright start, lost out to Cavan/Monaghan in the U-13 Plate final at the Hospital Field, Donegal Town.

The physically stronger Monaghan side took control just before the break and once they went ahead early in the second half, they looked like winners.
Donegal were the better side for much of the opening half, looking dangerous on the break. They were thwarted by a couple of marginal offside calls before taking the lead on 19 minutes. A through ball was chased by Oisin Duffy (son of former Donegal star John 'Manky' Duffy) who set up Eoin Kelly (brother of Aodh Ruadh's Colm Kelly). Kelly's effort came back off the post but Duffy again beat the 'keeper to the rebound to set up Aidan Brennan to slide home.
Six minutes later a great through ball from Duffy looked to have set Brennan free again but he was called offside, while Eoin Kelly was almost in for another chance.
But Cavan/Monaghan hit back with the technically gifted Shay Kelly sending a defender the wrong way before lobbing the advancing Donegal 'keeper. Kelly was almost in again minutes later after poor work in the Donegal defence.
Seven minutes into the second half it was Kelly who was involved again as the visitors took the lead. His cross was only half cleared and Jack Carolan had an easy tap in at the post.
Donegal did have a couple of chances with Max Johnston working really hard, but he first hit the sidenetting and then had another effort over the top. On a third occasion he was denied by the ever alert Cavan/Monaghan 'keeper Bonnie McKiernan
Aidan Brennan created a couple of chances for Donegal and Shea Malone had the ball in the Ca van/Monaghan net only to be ruled out for offside, before Cavan/Monaghan struck for the killer third goal with eight minutes left. Again it was their big centre forward Jack Carolan who finished it.
Donegal had a big shout for a penalty when Max Johnston seemed to be clipped going throught before Fintan Foy added a fourth goal.
Just before the end Donegal did pull a goal back when Pauric Hughes fired home but it was too little, too late.