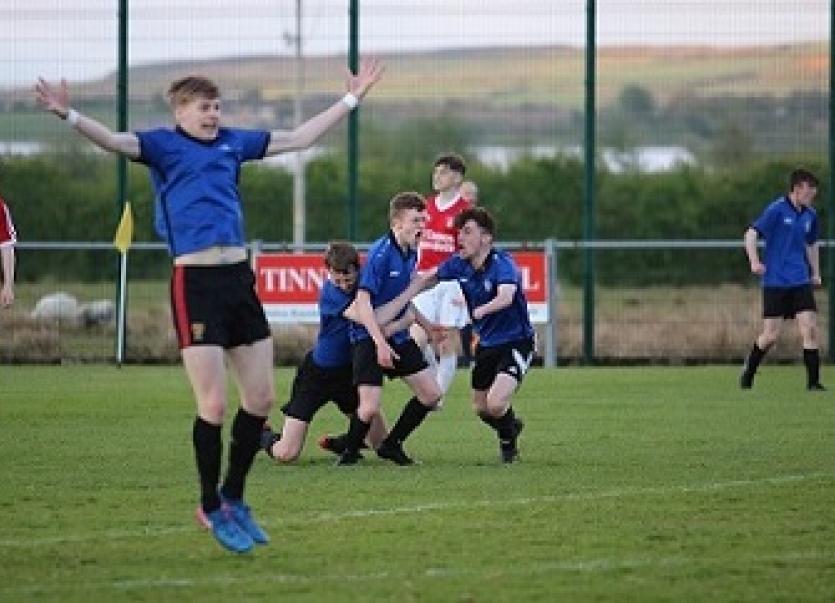 Dunfanaghy Youths' first season in the Donegal Youth League ended with silverware after a dramatic last minute goal from Luke McCarry gave them victory over Swilly Rovers in the final of the John 'Gorey' Curran Memorial Youth Cup at Dry Arch Park, Bonagee on Friday night.

The first half was a cagey affair with both goalkeepers not being overly busy.
Luke McCarry had a good chance for Dunfanaghy and Swilly’s Kyle McMullan’s free kick was well saved by Dunfanaghy net-minder Oisin Cannon.
In the second half Swilly had half chances through Finnian O’Donnell and Matthew McLaughlin. Dunfanaghy’s best opportunity was from the lively Edward O’Reilly.
Swilly thought they had the chance to win the game in the 88th minute when Frankie Campbell went down in the box, but instead of pointing to the penalty spot, referee Marty McGarrigle gave a free kick to Dunfanaghy and booked Campbell for simulation much to the annoyance of the Swilly supporters and the relief of the Dunfanaghy crowd.
But just when it looked like the game was going into extra time, up popped McCarry who finished expertly from the edge of the box to seal a memorable win for Danny Ferry’s young guns.