Harte of the Matter - talks to Shaun Patton 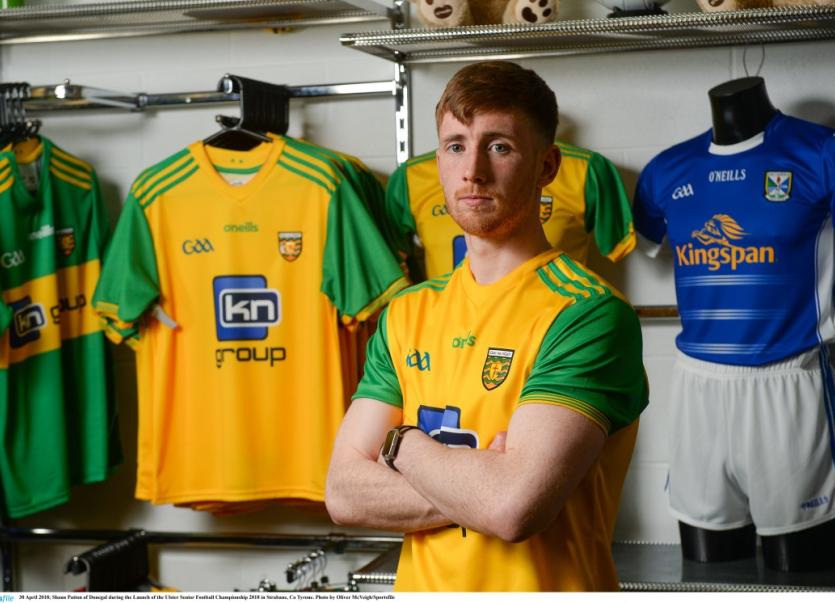 Jimmy Harte speaks to Shaun Patton who left a career in soccer to pursue Gaelic football, and made the transition successfully.

He was part of the Donegal team that lost out to Tyrone in their quest to reach an All-Ireland semi-final.

Thankfully for Donegal GAA fans, he has committed himself to the Donegal panel for the foreseeable future.  The former Finn Harps, Derry City and Sligo Rovers goalkeeper had not played gaelic football since starting for his club St Eunan’s in an Ulster semi-final in 2014 but he has, under the stewardship of Declan Bonner, made a huge impact with Donegal because of his professional approach and modest attitude.

How does it feel to be Donegal’s No. 1 after the season you’ve just had?

“All feels great, I’m happy with the season I had personally and everyone had a good year. Unfortunately it was cut short, shorter than we wanted. But at the start of the year if we had known what we were to accomplish you would take your right hand off to get where we were”

How was the mood in the camp after the loss to Tyrone?

“Ah well it speaks for itself, everyone was thoroughly, thoroughly disappointed. The mood after the game was a low point. To be so close to going through to the semi-final of the All-Ireland and it to be taken away wasn’t easy. But hopefully we can get over it and kick on next year and there’s young people coming through”

Aside from winning Ulster, what was the personal high point of the championship this year for you?

“Personally, establishing myself as No. 1 keeper and getting the opportunity. Once I got the opportunity I took it and took it well - so that’s probably my best achievement” What has Declan Bonner brought to your game this year?

“He has given me the confidence to show what I can do. He spoke to me at the beginning of the season, sat me down and told me what he needed, I explained what I needed. He gave me the opportunity and put a lot of faith in me. Hopefully I’m repaying that faith with the performances I’ve given”

What effect did the new Super 8s structure have on your preparations?

“For myself personally it didn’t affect me too much because I played soccer for many years before so it was ok. I was playing one game a week, if not two, so it was nothing new to me. For the others players it was difficult for them to prepare for a game a week because it’s so physical and demanding”

Why did u make the move from soccer to GAA

“For myself personally I felt I wasn’t given the chance to show what I could do and thought if the opportunity came up and I turned it down, I might regret that chance at proving myself as a No. 1 goalkeeper. Hopefully I’ve done that and continue to do that”

What are the differences between being a soccer and GAA goalkeeper?

Will u go back to playing soccer in the future?

“The way things are going at the minute it remains to be seen. Things can change, I played soccer my whole life but at the minute I’m really enjoying the change of scene. I don’t see it in the near future.”

Are there any other soccer players you played with who would have been good in the world of GAA?

That‘s an interesting one . Now I would say a lot could hit the ball over the bar fair and handy but to be able to compete in  GAA, I don’t think there are too many because it’s such a physical game.

“They are used to using their feet, soccer players, but if you put the ball in their hands they get a wee bit lost! There was one player I played with last year at Sligo Rovers - Gary Boylan from Belmullet, Mayo. He played with Mayo minors and got to an All-Ireland final. He’s a player I could meet in the future. He was a very good GAA player and kicked with both the right and the left foot. Now GAA players playing soccer….probably, Frank McGlynn would be a good soccer player in his day.

Any thoughts on a professional fee-paying system in GAA?

“It’s an interesting question, I was involved with professional soccer and I was getting paid for it. Now it can take away from the heart of the game. There are people happy to take their money and at the end of the week sit on the bench. When I went into the Donegal panel everybody there wants to do well. At GAA training everyone is there and competing to play. If money comes into play, people might be turning up for the game and not putting in what they can.”

Do Donegal have another All-Ireland in them in the near future?

“Personally I think we can, there’s no reason we can’t, so I’m personally going to say yes to that question. At the minute it’s people like Frank McGlynn, Paddy McGrath, Neil McGee, and Michael Murphy, the senior boys that have been there and done it and who give us so much motivation to try and accomplish what they have accomplished. To be fair, every single one of them is helping the young fellows through it and teaching

them what they can. Obviously the older fellas are learning new things from the younger ones too.”.