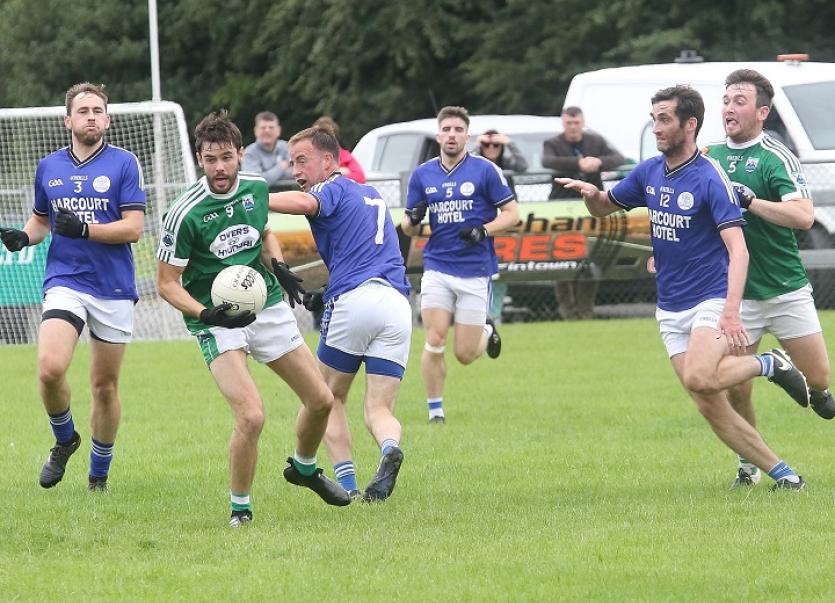 Both sides are in a gruelling section in the race for the Dr. Maguire with St. Eunan’s and Dungloe for company. However it was the Magheragallon men that stole a march here.

They travelled to Davy Brennan Memorial Park knowing that a win would see them leapfrog pace-setters St. Eunan’s at the top of the Division 1 standings. Naomh Conaill, back in third, were hoping to close the four-point gap that existed prior to throw-in between themselves and Mervin O’Donnell’s men.

The visitors were the more impressive outfit early on and jumped out to a four-point lead just four minutes in. First, Odhran MacNiallais clipped over the opening score of the game from a routine free.

Then, less than a minute later, a sweeping move where the ball was worked through Peter McGee and Kieran Gillespie, ended with Naoise O Baoill ghosting in and tapping a very cool finish past Stephen McGrath .

Naomh Conaill were off the mark through Ultan Doherty, when he took advantage of the generous room given to him inside that pocket between the ’45 and the ’21. MacNiallais hit back to leave it 1-3 to 0-1, eleven minutes in.

With Ciaran Thompson becoming much more prominent, Martin Regan’s men showed their undoubted quality to boot the next four scores. Thompson got the first two of those kicks with an exhibition of place-kicking from the hands.

Both efforts were to the wide right but the county man made light work of the angles and distances on each occasion.

Still, Gaoth Dobhair looked dangerous every time they approached the home rearguard. And another penetrating attack again reaped the ultimate reward for MacNiallais when he nailed in a second three-pointer for his side.

Eoin Waide did manage to drag Glenties out to six, seven minutes from the interval. But a three-point scoring burst from the opposition propelled Gaoth Dobhair’s tally to 2-6. MacNiallais, from a free, and a subsequent double through Eamon Collum brought the curtain down on their fine first-half efforts.

Naomh Conaill did strike once more before the short whistle thanks to Kieran Gallagher’s foresight to follow in a Seamus Ellis effort that dropped short at the back post. But at the break, it was Gaoth Dobhair that held a strong five-point upper hand.

Five jumped to seven soon after the restart thanks to points from Collum and what was initially labelled a “collector’s item” off his right peg from MacNiallais. However, the mercurial MacNiallais, surely channelling his inner Ronnie O’Sullivan in the second-half, would end up with four efforts courtesy of his supposedly ‘weaker’ foot.

Marty Boyle dragged Glenties onto eight before MacNiallias, who along with Ciaran Thompson it has to be said, gave a real exhibition of kicking over the hour on Sunday, again put seven between the sides.

Thompson, one from play and one from a free, cut two off that lead either side of the 43rd minute. O’Malley shook a crossbar with a driven effort that would have reeled the leaders back to within two.

The same player did momentarily take Naomh Conaill back to within a four-point arm’s reach. But again, it was MacNiallais in that drifty/casual style of his, that had an almost instant reply up the other end.

Another who impressed for the Boys in Blue was O’Malley. He kicked two more points to take his side back to within one single green flag by the 52nd minute.

MacNiallais and Waide traded scores and the gap remained three, on 2-11 to 0-14. Going down the home stretch, MacNiallais seemed to make sure of matters when a green flag was lifted by the umpire stationed at the foot of Stephen McGrath’s post.

Man in the middle, Enda McFeely, intervened and rightly overruled that call as the O’Neills definitely nestled in the side netting. Late on, Glenties lost Eunan Doherty to a second yellow.

Substitute Gavin McBride had the last say for the eventual winners from a close range free to bring an end to what was a very enjoyable hour of football.

These two will clash once again in four weeks’ time in championship warfare. The stakes will be much higher.  With the quality on show at both ends on Sunday, and with a number of big hitters to come back into the reckoning in both teams, it’s sure to be a cracking game of football between two parishes with serious designs on a SFC title.