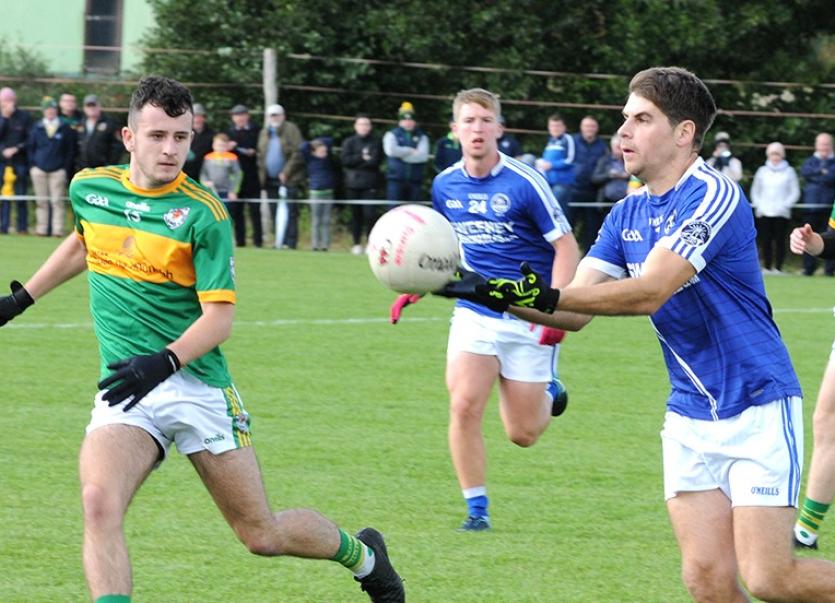 Fergal Friel sets up an attack for Fanad Gaels

Gaeil Fhánada got their Intermediate championship campaign off to a winning start with an eight point win over neighbours Downings in Portsalon on Saturday evening.

Michael Sweeney scored the two goals for the locals, who played three quarters of the game with 14 players after Seamus Nanny Friel was red carded at the end of the first quarter hour.

Gaeil Fhánada also lost Eoghan Carr to a black card for his involvement in the incident which led to Friel receiving his marching orders.

A goal and a point for Gaeil Fhánada and a point each from Seimi Nanny Friel, Jimmy Coyle and Niall Carr helped the locals, who had played against the stiff breeze, into a 1-4 to 0-3 half-time lead.

Lorcan Connor (2) and Gary Ban McClafferty scored for Downings, who would be very disappointed with their opening 30 minutes.

Gaeil Fhánada continued to dominate on the resumption and thanks to white flags from Michael Sweeney, Bernard McGettigan, Ephrim McFadden, Oisin Shiels and Brian McVeigh and Sweeney’s second goal, ran out convincing winners.

Downings, to their credit, did up their game in the second half as Lorcan Connor - before being black carded - Gary Bán McClafferty, Oisin Boyce and Keelan McGroddy all scored fine points.

But in the end they paid the price for a poor first half performance and really it was always going to be a struggle to reel Gaeil Fhánada back in the second period.