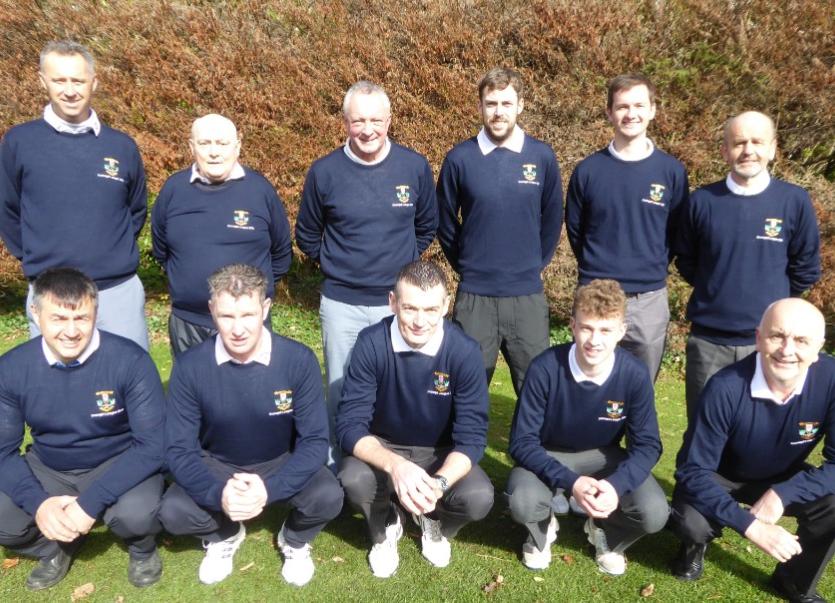 Letterkenny travelled the Wild Atlantic coast with wins over Cruit island, Gaoth Dobhair, Cloughaneely and Rosapenna in an epic journey on their way to Donegal League success.
In an exciting finish possibly not even matched by the Ryder Cup Letterkenny and Rosapenna Golf clubs produced a dramatic finish in Barnhill on Sunday.
In the 1st leg the Letterkenny team were dominant in the Rosapenna links leading by 3 ½ to 1 ½ matches. Seamus Patton and David Mc Cormick, Kieran Sweeney and Kevin Rafferty won the 1st 2 matches and were ably backed up backed by Liam Wiseman and Ronan Daly and won the 18th to secure a great half point.
John Russell and Brian O’ Donnell put in a great performance winning 4 and 3. So, it put Letterkenny in a very strong position for the 2nd Leg. However, Rosapenna had other ideas and fielding a very strong team the match went to the wire. Wins by Enda Kennedy and Frank Casey on the 17th and Con Boyce and Matthew Coyle on the 18th gave Rosapenna an early lead.
Although Henry Mc Cahey and Kevin Hensey battled to turn the tide it was Rosapenna’s Shane Sweeney and Brendan Roache who won the 3rd match at the 16th.
Brian O’Donnell and John Russell (Letterkenny) won the final match at the 15th to secure a vital point.
Letterkenny now needed a half match for the title and were 2 down with 3 to play.
Liam Wiseman secured a great win at the 16th and at the 17th Louis Boyce and Michael Boyce parred for Rosapenna and Liam also secured the par. So, it was down the 18th and after both Rosapenna players missed their pars it was Ronan Daly who became the hero with a solid par to the delight of all his team mates.
It was a match played at the highest level of sportsmanship as acknowledged by Rosapenna captains John Casey and Shane Sweeney.

He thanked Rosapenna Golf Club for making it such a great occasion both in sportsmanship and also for the great hospitality in the 1st leg.

Seamus thanked John McBride (Donegal League), his vice-captain Edward Harvey, Liam Wiseman, the green keepers for the great condition of the course and the Club for their great support, Browns of the Green restaurant and Greg Cullen for his sponsorship.

Seamus also made an appeal for organ donors as he himself expressed great gratitude at being able to lead this team after his organ transplant five years ago.

Hugh Mc Clafferty (Captain of Letterkenny Club) thanked everyone and especially Seamus and the team for bringing home the cup after 12 years, and Rosapenna Golf Club for making it a great match in Letterkenny.