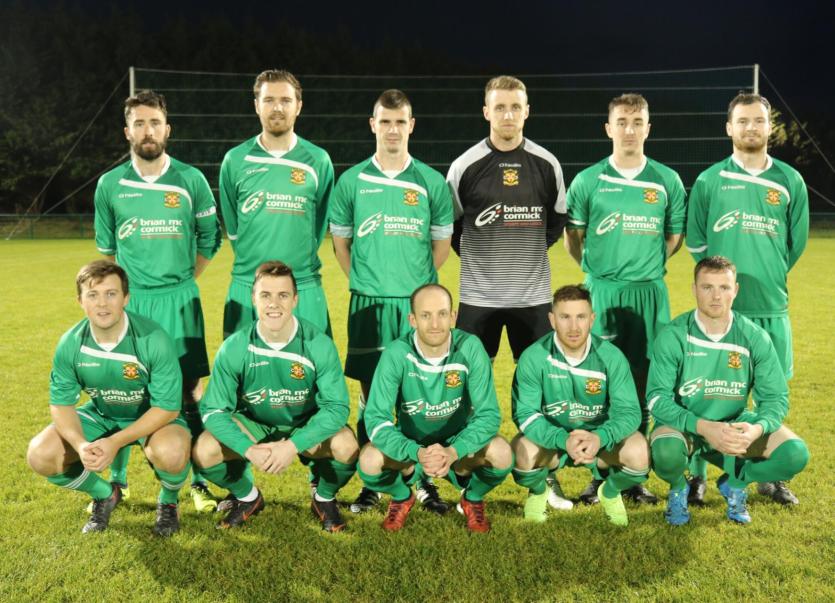 The Ulster Senior League side who lost out to Munster on Friday night. Picture: Stephen Doherty

The Ulster Senior League were left to count the cost of two early goals in their opening game in the 2018 FAI Intermediate Inter-League Tournament game.

Mark Murphy and Kelvin Kruschell bagged goals in the first 17 minutes to inflict a damaging defeat on Anthony Gorman’s tournament hosts, who were the dominant side in Ballyare.

The Munster goal arrived in periods during which the USL had been dominant, but Gorman’s charges were unable to find a killer instinct in the final third, in spite of a glut of chances.

Substitute Johnny Bonner did find a way but, when the Letterkenny Rovers midfielder volleyed home, there were five minutes of added time already played and time had run out.

Defeat leaves the USL facing a big battle if they are to keep the Michael Ward Trophy in Donegal for the next 12 months and they will have to do without Thomas McMonagle, who was sent off in a scramble that ensued after Bonner’s 95th minute strike.

Munster took the lead after only eight minutes when Garvan Manley’s teasing cross from wide on the left found its way to the unmarked Murphy, who nodded home.

The hosts, as if affronted by the early concession, set about making an immediate response.

And they very nearly got it. Tony McNamee, caught late in the process by a challenge that earned Manley a booking, threaded Kevin McGrath free on the right channel. McGrath’s first-time cross picked out the in-rushing Gerard McLaughlin, but the Cockhill frontman was just off-target.

Just before the goal, a similar break saw a deep ball in narrowly evade the stretching McNamee,

McGrath, getting some joy with the freedom he was being afforded, found a way into the penalty area on the quarter-hour, but the advancing Andy O’Donoghue did enough to save from the Letterkenny Rovers man’s shot.

Benny McLaughlin curled inches over the top, but the USL found themselves at the base of a mountain when the Munster men doubled their lead as Jake Hegarthy flick-on fed Kruschell, who kept his cool to slot across Rory Kelly to leave the tournament hosts reeling.

The USL continued to dominate possession and play, but Benny McLaughlin was denied by O’Donogue before Ryan McConnell headed into the arms of the Midleton goalkeeper.

Mark Moran stung O’Donogue’s palms from long range as the USL grew frustrated with the passing of time.

In added time at the end of the first half, McNamee almost caught O’Donoghue cold but, despite being well off his goal-line, the ‘keeper managed to get a strong enough touch to prevent the Swilly Rovers man from pulling a goal back.

Jimmy Bradley - who recently lined out of the Republic of Ireland in the UEFA Regions Cup qualifiers in Romania - arched a shot inches over the crossbar 20 minutes form the end.

Munster introduced Raphoe native and former Letterkenny Rovers man David Shovlin, now donning the colours of Avondale United in the MSL having been a key member of the USL panel in recent years, for the closing chapter, and they held onto their advantage for a precious win.

The margin might have been greater but, just moments from the end, Kelly denied Simon Falvey, who broke clear, while Bonner’s late goal was of scant consolation for the USL.