Round-up of the weekend's action 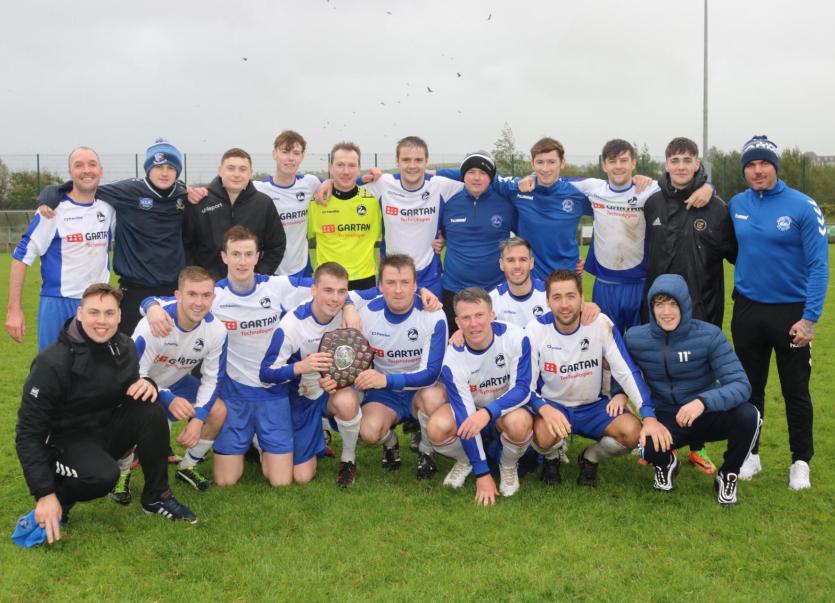 Milford United joined Ballybofey United, Convoy Arsenal and Keadue Rovers in the semi-finals of the Brian McCormick Sports Cup after they won the Letterkenny Area Shield Final on Sunday.
Milford’s tie away to Bonagee United ended 0-0 after extra-time, but Milford came out on top on penalty kicks.
Sunday’s game might have been goal-less, but there were plenty of chances for both sides.
Lee McMonagle went closest early on for Bonagee but the Letterkenny side had their keeper John Carr to thank for a string of fine saves to deny Gary Merritt, Kyle black and Chris Dillon.
The home team had half chances through Mc Monagle and Cannon but Mc Gettigan in the visitors’ goal coped well with their strikes. Terence Shields saw his header from six yards headed off the line by Glen Gallagher on eighty five minutes. Bonagee should have taken the lead two minutes into extra time when Kevin Kelly’s shot from the edge of the box went just wide of the post.
Milford eventually won 6-5 on penalties. Their scorers were Johnny Logue, Mark Flood, Gary Merritt, Cathal Mc Gettigan, Christy Mc Cafferty and Darragh Black. Bonagee’s scorers were Kevin Kelly, Glen Gallagher, Paddy Mc Gowan, Eamon Cannon and Noel O’ Donnell.
Referee Paddy Martin

Premier Division
It’s been a strange start to the new season in the Brian McCormick Premier Division with no side managing to set the pace thus far.
Kildrum Tigers, the champions, lost for the first time on Sunday, 2-1 at Glenea United. But amazingly they continue to lead the table with five points from four games.
Ciaran McGeady and Paddy Cannon got the goals for Glenea at a wet and windy Glasserchoo. Darren Doran scored for Kildrum in the second half, but despite having the wind at their backs, and going close on a number of occasions, they couldn’t find an equaliser.
Keadue Rovers’ steady start to the campaign continued when they were 5-0 winners over St. Catherine’s.
Chris Greene gave them the lead from a penalty before Danny McGlynn made it 2-0. Goals from Aidan McHugh and Sean ‘Yank’ Boyle helped them into a 4-0 half-time lead. The fifth was scored by ‘Yank’ Boyle.
In an entertaining encounter in Rathmullan, it was 2-2 between Rathmullan Celtic and Cappry Rovers.
JayDee Alawiye gave the hosts the lead. Cathal McShane equalised just after half-time for Cappry before Tristan Ferris headed them in front. But Rathmullan earned a point when JayDee Alawiye scored a late penalty.

Division One
Drumoghill made it three wins from three league games in the Temple Domestic Appliances Division One on Sunday.
They went to Ballybofey United and won 3-2 with all the goals coming in the second half.
Drumkeen United were 3-0 winners against Gweedore Celtic while Cranford United lost 1-0 at home to Convoy Arsenal.
Another disappointing day for Cranford as yet again they had the majority of chances but their luck was out. Convoy took the lead after 20 minutes when an inswinging corner carried the whole way into the net.
There were six goals shared at Orchard Park where Lagan Harps and Lifford Celtic drew 3-3.
A last gasp equaliser from former Lagan schoolboy player Conor Mulhern earned Lifford a point in a thrilling encounter.

Division Two
Whitestrand United are the new leaders in Division Two following a 1-0 win at Glenree United on Sunday - Kevin Loughrey with the winning goal.
Deele Harps are up to joint second after they beat Letterbarrow Celtic 2-1.
Ryan McColgan gave Deele the lead on 5 minutes when he finished well. Letterbarrow were level on 30 minutes with Gerry McBrearty finishing well.
The second half saw the away side dominate possession but they couldn't convert it into any meaningful chances. Deele clinched all three points with a Ryan McColgan free sailing all the way into the net with 10 minutes remaining.
Raphoe Town were 5-2 winners over Kerrykeel with in-form DJ Kelly scoring twice.
The other goals came from Christy Bogle, Paddy Gallagher and Dylan Brolly.

It’s four wins from four for Glencar Celtic as they beat Oldtown Celtic in a local derby in Letterkenny in the Glencar Inn Division One on Saturday.
Glencar led 1-0 at the break thanks to a goal from Conor Gibbons. Michael Devine equalised for Oldtown but Kevin Rafferty headed in a Garvan Grieve free-kick to give Glencar all three points.
Strand Rovers conceded ten goals in the cup against Greencastle on Sunday week last. However, they bounced back in perfect fashion with an 8-0 win over Glenea.
Conor Greene, Paddy Glackin and Dillon Boyle scored two goals each with the others scored by Chris Boyle and Brendan Glackin.
There were two games as well in the Voodoo Venue Cup.
Drumkeen found themselves up against a very good Keadue team in their preliminary round tie at St Patrick’s Park on Saturday. While the visitors deserved their win the final score was perhaps a bit harsh on the home team who hit the post on three occasions.
Keadue dominated the early part of the game and took the lead on nine minutes with a goal from Michael Greene.
Two more goals followed from Ultan Boyle and Christy Greene and just before the break, Marty Gallagher was unfortunate to hit the post for the hosts.
Keadue added a fourth goal early in the second half when a Peter McGee corner was not dealt with by the Drumkeen defence and went in off a Drumkeen defender. Drumkeen kept plugging away and actually played a lot better in the second half. With nine minutes left Marty Gallagher did pull a goal back for Drumkeen but it would prove nothing more than a consolation strike.
Meanwhile at Rannagh Park, Milford United Reserves got the better of Arranmore United. Milford won 2-1 after extra time with both goals scored by Ciaran Blaney.