Timlin and Coyle injury concerns for trip to United Park 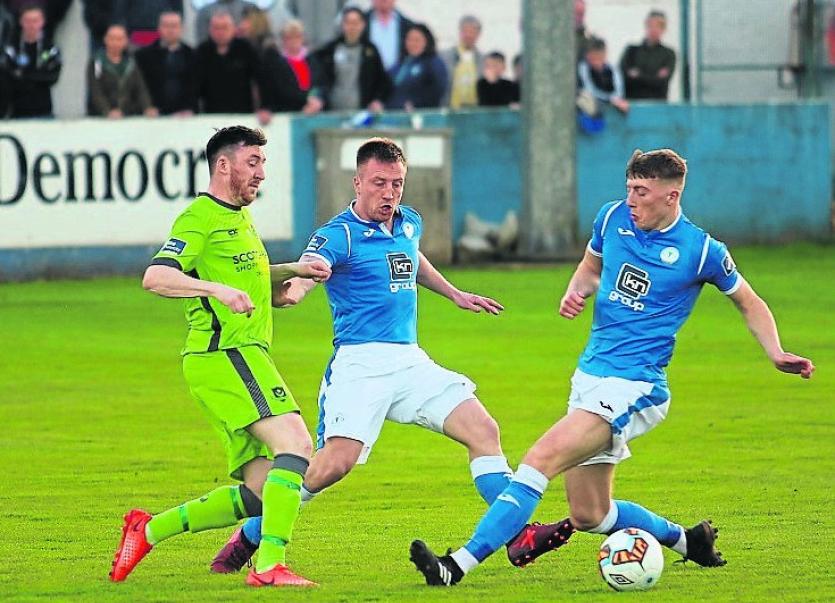 After almost three weeks without a competitive fixture, Finn Harps begin another play-off campaign on Friday night when they play Drogheda United at United Park (7.45pm).
The County Louth outfit came through a dramatic play-off 2nd leg against Shelbourne at Tolka Park on Monday night, winning 4-2 on penalties after the tie had finished 2-2 on aggregate.
Drogheda’s win was perhaps unexpected given that they had host the first leg last Friday night 1-0 at United Park.
However, the tie turned on its head when in the first half of Monday night’s game, Shels had two players sent off. The nine men managed to bring Drogheda to penalties but the visitors came out on top on spot-kicks.

Harps boss Ollie Horgan, who was in United Park for last Friday night’s first leg, admitted that he didn’t expect Drogheda to come through the tie.
“Obviously you can’t legislate for having two players sent off,” he said.
“But I fully expected Shelbourne to win.
“So now we’ve got to plan for Drogheda and even though you could say they might be tired after their two games this week, they’ll be on a high after coming from behind and winning.”
Harps’ last outing was on September 22 when they trounced Cabinteely 7-1 in their final league game.
“If we’d been playing Drogheda in the play-offs the following weekend, I’d have been happier,” Horgan said this week.
“We’d just gone ten games unbeaten in the league and the players were on a high. But then you have to go three weeks without a match.
“It’s far from ideal and you don’t know how that’s going to affect us.
“It hasn’t been easy. We played the Defence Forces in a friendly but other than that, all we’ve been able to do is to try and keep ticking over in training and try to keep the players’ minds focussed on these play-off games.”
One plus side from the lay-off is that the gap in matches has allowed players recovery from any niggles or injuries picked up in the final few games in the league.
Mark Timlin is back running again, after missing the closing series of matches due to injury. It’s not expected that he’ll feature on Friday night, but he could be okay to play in the second leg if needed.
Meanwhile Mark Coyle is also a doubt because of an ongoing injury problem. The midfielder is also unlikely to play at United Park.
Friday night’s trip to Drogheda will be Harps’ third game at the Co. Louth venue this year - although it’ll be their fourth trip. Both teams were ready to take to the field when problems with the floodlights saw the late cancellation of the season’s opening match back in March.
The match was eventually played later that month with Drogheda winning 2-1. In the two games since, Harps have won out, 2-1 in Ballybofey in May and 1-0 at United Park in July.
“It’s difficult to predict how the game will go on Friday,” Horgan suggested.
“It’s a play-off match and there’s so much at stake. At this stage, you might take a draw or even a 1-0 defeat to ensure the tie’s still alive for the second leg in Ballybofey.
“Drogheda showed by beating Shelbourne that they’re a very good side. They can open you up when coming forward and have plenty of quality in their ranks.
“As a club, it hasn’t been easy not having a match for three weeks - not easy for the players, and not easy in terms of our finances.
“But what can you do? We’ve now got two games to keep our season alive and hopefully after Friday night, we’ll be in with a good chance of making it into the play-off final.”
The second leg of this play-off will take place at Finn Park on Friday, October 19 at 7.45pm.
The winners will then play the team that finishes second from bottom in the Premier Division over two legs.