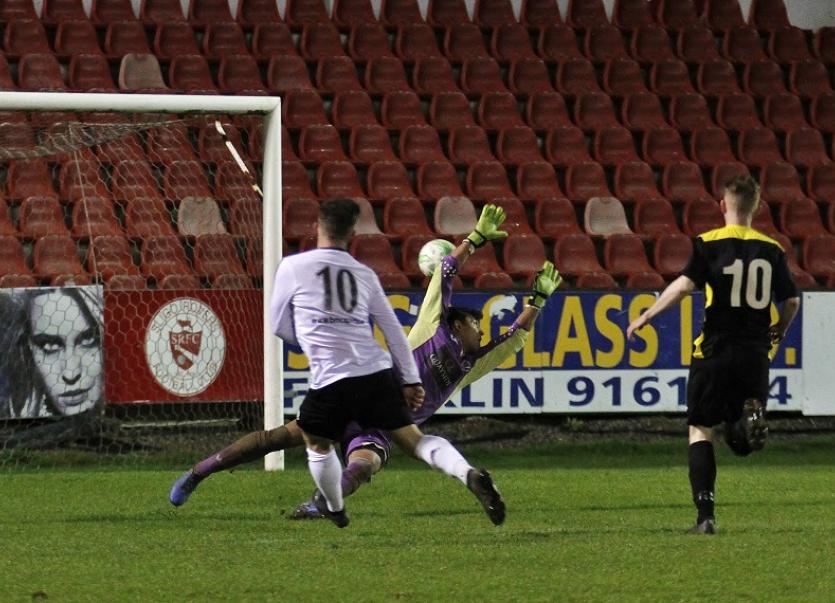 Kevin McHugh scoring one of his goal

A brace of first-half goals from twinkle-toed Kevin McHugh helped put the Donegal Junior League into the last eight of the FAI Oscar Traynor Cup.

Despite being held to a 2-2 draw by the Sligo-Leitrim and District Junior Soccer League at The Showgrounds last Saturday night, Donegal progress to the knockout stages as Group 'D' winners.
Sligo-Leitrim's failure to achieve the result they required – victory by two goals – means that Inishowen go through as this section's runners-up.
On a blustery, wet night in Sligo town, Finn Harps legend Kevin McHugh showed that time hasn't dimmed his goalscoring instincts when he put Donegal ahead after four minutes.
Donegal counter-attacked after a Sligo-Leitrim corner was cleared and McHugh nipped past the covering defenders to sweep a cool shot beyond Sergio Gomez.
The visitors, for whom winger Cory Gallagher was lively, could have doubled their lead in the 20th minute but Kevin McHugh's low, skimming effort was put out for a corner.
Sligo-Leitrim levelled matters when Keith Nibbs netted with a diving header two minutes later.
Donegal, who had to absorb increased pressure from the hosts, regained the advantage after 38 minutes. Gary Whoriskey's tempting ball into Sligo-Leitrim's box was seized on by Kevin McHugh, who was impeded.
The goalscorer stepped up to the take the subsequent spot-kick and finished with aplomb.
Indeed, Kevin McHugh might have finished the first-half with a hat-trick but for a fine reaction save by Sergio Gomez, who saved well at his near post.
Donegal, who led 2-1 at the break, were restricted to long-range efforts for much of the second-half – Seami Friel, Kevin McHugh, Gary Whoriskey and Cory Gallagher each had attempts at goal.
Improving Sligo-Leitrim, for whom Conor Griffin, son of Donegal native John Griffin, impressed in defence, deservedly equalised late on.
But Tyler Stallard's 90th minute goal from close-range meant they still had to conjure two further goals in stoppage time.
Indeed it was Donegal, unbeaten in their two Group 'D' games, could have scored again as Kevin McHugh, inevitably, was involved but his dinked effort was well over.