Read the Reid: Time for some exercise to clear the head

A chance to lift ourselves out of the doom and gloom 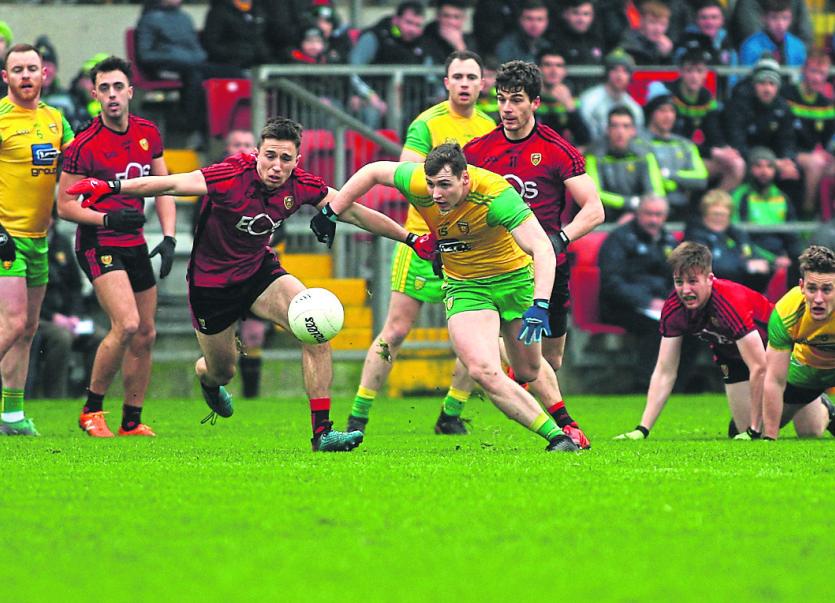 Donegal's Jamie Brennan races onto a breaking ball against Down during the Dr.McKenna Cup in Newry on Sunday Picture: Thomas Gallagher

We’re ten days into the New Year and our gyms and personal trainers are doing a roaring trade. Having made new year’s resolutions to get fit and/or lose weight after gorging ourselves over the festive period, we’re on a mission.
Donegal’s mission of defending their McKenna Cup crown is on course too after another ten-point hammering of Down. Monkey jibes in women’s soccer, namely targeted at Spurs players, an alleged Nazi salute from the Crystal Palace goalkeeper in the F.A. Cup and Leitrim getting beaten on penalties by Mayo are the main sporting headlines doing the rounds this week. We sure live in a crazy world. Penalties in Gaelic football? However, I’d like to lift you out of the doom and gloom and bring some light to your lives.
Why do we exercise? Many will say “It clears my head”. The science behind this remark tells us that exercise produces serotonin which is known as the ‘happy chemical’. Perhaps this is why it “clears the head”.
More and more people are discovering that they have to “clear the head” as statistics shows that stress, anxiety and depression are on the increase. January is a challenging month for all of us. Mental ill health has been an issue since the year dot. We are certainly more aware about the problem nowadays but unfortunately it is still stigmatised.
Of course, this is a complex and multifaceted concern and I don’t have the answers. But we do need to waken up to the fact that most of us are falling victim to very subtle tactics of unseen people determined to ruin society. I’ve done the research to help you to understand why society is so messed up.
Since my personal battle with mental ill health many years ago, I’ve studied this topic inside out. Although the issue is indeed complicated and has many aspects and features, there are, as I’ve discovered, an underlying and corrupt group of secret organisations and societies deliberately driving us to despair.
Most of us are oblivious to these hidden people, who are the wealthiest and most powerful people on the planet. The Tavistock Institute is the nerve centre for the global manipulation of human consciousness. It helped to create the CIA, NATO and the Club of Rome. The latter creates propaganda and crisis in order to manipulate the world’s population in a pre-determined direction, toward a collectivist, one world socialist dictatorship.
Tavistock operates through a vast network of think tanks, NGO’s, universities, and media outlets to influence public opinion, while breaking down the moral fabric that has held the West together using scientific-crafted techniques of manipulation. They want a public that is predictable and conditioned to do as it’s told without asking questions. That’s why we have political correctness. It creates uniformity and abolishes individualism. They don’t want you to think for yourself. There are many other organisations out there working in tandem with Tavistock but, this will suffice for now. I urge you to do you own research.
This social agenda has been 100 years in the making and these people are very patient. However, their diligence is paying dividends in this new age that we are currently experiencing. All we have to do is to scratch the surface to see that they want keep people busy and entertained with insignificant rubbish while they run the world and slowly condition us into their way of thinking. Man-made climate change and evolution are the new religions. The family unit is no longer important. Gender fluidity, moral decline, self-adulation, materialism, consumerism, drug and alcohol abuse are all products of this new age. Criminality, both petty and serious, are accepted as just part of a changing Irish culture. It’s out with the ‘old’ and in with the ‘new. ’
There is a new word out there too. It’s called ‘sheeple”. We are the sheeple who conform and comply to the new world order. Yes, times have never been so good in Ireland. We are affluent and wealthy. We want for nothing and yet we are so empty; living in fear, devoid of stability and hungry for truth. The mental health of our citizens has never been so bad.
George Orwell was right when he wrote a book called ‘Nineteen-Eighty-Four’. “The novel is set in the year 1984 when most of the world population have become victims of perpetual war, omnipresent (global) government surveillance and propaganda” (Wikipedia).
Most of us have cell phones. Go to your google account and you’ll be amazed at how much attention that they pay to your activity. You can see where you been since you opened your account. They tell how long you’ve been in the bank, in a restaurant or even in the pub. They even show you a graph. You are being watched and monitored constantly.
“Stay sober and alert. Your opponent the devil is prowling like a roaring lion looking for someone to devour”. It might be you! And its wasn’t Meatloaf who said this. Meatloaf just wants to “run right into hell and back”. He’d “do anything for love” but if he runs into hell, he’ll never be back.
Keep the faith!