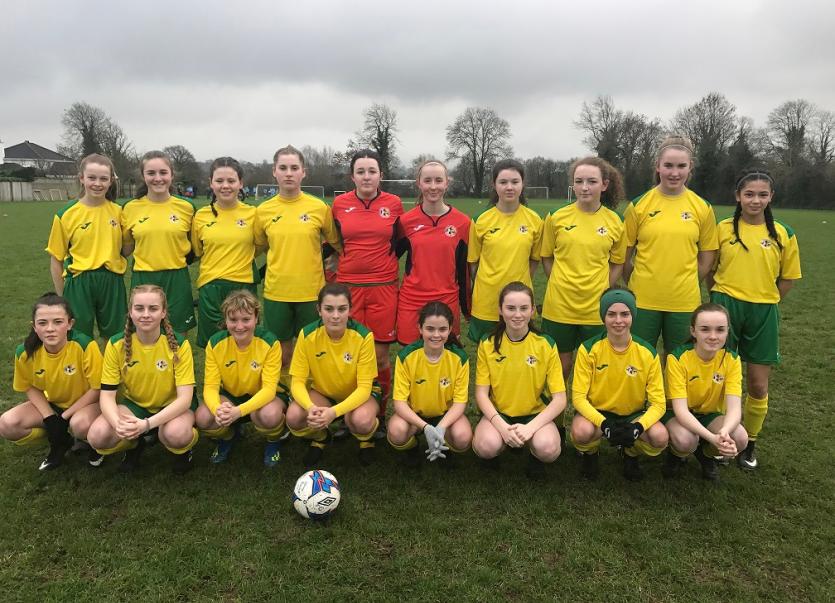 Donegal settled into their passing game early on with Lucy Canning providing excellent through balls to Hannah Hopkins and Brenda Carr on the right side. Erin Doherty was dominant in centre midfield with Erika Gallagher driving forward from midfield. The away team created a lot of chances early on and forced a few corners with their combination play.
The deadlock was broken in the 10th minute when the lively Codie Walsh made a great run deep into the Longford box and her pull back was drilled to the far corner by Hannah Hopkins. Indeed Hopkins was getting a lot of joy on the right side and put in some great deliveries. Brenda Carr doubled the advantage in the 20th minute with a neat finish after good work from Shania McMonagle.
Good work on the left from Niamh Sweeney released Rebecca McColgan and her through ball found Codie Walsh who was taken down in the box. She dusted herself down and finished emphatically from the penalty spot. Soon after Walsh scored her second after good work from Nicole McDaid and Cora McBride on the left. Serena McCrossan and Shania McMonagle were solid in defence and thwarted any threat caused by the Longford attack. Goalkeeper Ellie Duffy was sharp off her line too when called upon and showed great handling skills.
At the start of the second half Gabrielle O’Donnell was unlucky to be called offside after she reacted first to a great strike from Erin Doherty that was well saved by the Longford keeper. Longford pulled a goal back after a neat finish in the box giving the keeper no chance. It was to be Gabrielle’s half though as she bagged an impressive hattrick to put the icing on the cake for Donegal. The first arrived after great work and a great cross by Emily Irwin up the right. Codie Walsh set up the next for O’Donnell when she reacted quickest at the edge of the box and found her strike partner in the box. Her third arrived when Ciara Molloy’s cross found O’Donnell at the back post and she finished powerfully to the net.
Jodie McFadden made an impression in the midfield when introduced with her strength and energy. Lucy Canning was controlling the backline with Caitlin Hume and Emma Doherty also doing well when called upon in the second half. Overall a great team performance from Donegal from start to finish in all areas of the pitch. Next up for the girls is Mayo at home in February.