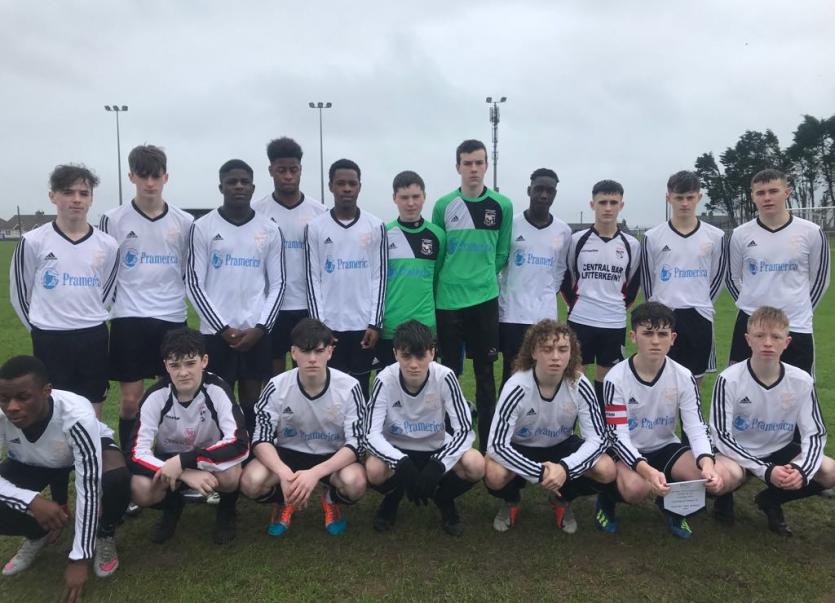 Letterkenny Rovers pulled off a notable win on Saturday when defeating Tramore Athletic 3-2 in difficult conditions at Graun Park in the U-16s SFAI National Cup.
The win was very much deserved for Anthony Gorman's charges who continue their good recent record in the National stages and this win secures a home tie in the last 16 when they will host Mullingar Athletic Pumas.
It was the home side, aided by a strong wind and teeming rain, who started the better and started off on the front foot with the nearest they came to opening the scoring was when the lively Jamie Brazil struck the post with a Brazilianesque free kick while Rovers defender Sean McVeigh had to be alert to clear just as Adam Croke was about to pull the trigger having fathomed the chance with some neat footwork.
Tramore then saw Ryan Walsh shoot straight at visiting netminder Killian Gribben when well placed but after absorbing the intial attacks Rovers came well into the game and started to create some opportunities going forward and dominating possession without overly troubling home goalkeeper Dylan Nolan.
That was to change, however, just before the half-time break as Rovers took the lead to silence the large home crowd as Tobi Akinyimika was on hand to finish from close range after Jack Dwyers cross was nodded down into his path by Brandon Ndlovu.
The lead goal always crucial in cup ties and Rovers were in dreamland just six minutes into the second half when Akinyimika was on hand to expertly head home a Joel Gorman free kick which was awarded after Gorman hmself was fouled.
That should have been the precursor for the visiting side, who made the long trip south on Friday evening, to go on and win the game but they made life difficult for themselves against the Waterford side side who threw everything bar the kitchen sink in the hope of keeping their cup dreams alive and they should have halved the deficit on 50 minutes only for Elijah Fortuene to somehow miss from close range.
That was a warning shot for Rovers and Tramore did get one back on 59 minutes when defender Joe Hawkes scrambled the ball home follwowing a free kick and almost restored parity on 64 only to see Gribben pull off an outstanding stop to deny the flame haired Lee Hennessey.
Rovers had chances to extend their lead through a Joel Groman free kick and a nathan Plumb effort but they may have lived to regret those chances as Hennessey did level for Tramore with 15 minutes to go when he finished high to the net after a mazy run from Brazil.
Tramore have a rich history in youth competitions and they sensed they could complete the comeback but Rovers showed true grit and determination and bossed the last 15 minutes and came close through a Fawad Bashar header, Plumb and the lively Adam Yisau before getting what turned out to be the winning goal with five minutes left when Yisau slotted home after being teed up by Plumb after Bashar's initial defensive clearance.
That win for Rovers cheered on by a large number of travelling supporters would have made the long journey home a lot shorter with a home tie awaiting in the round of last 16.