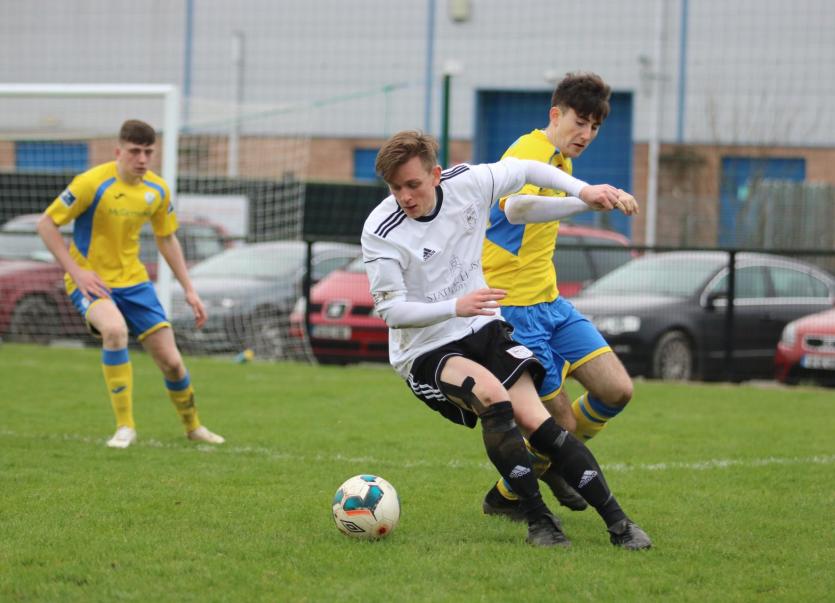 Letterkenny Rovers joined Cockhill Celtic at the top of the Ulster Senior League table with a slender win over Finn Harps Reserves at Leckview Park on Sunday.

Letterkenny Rovers 1
Finn Harps Reserves 0
Rovers started the game the better and could have taken the lead on 6 minutes only for Declan Sharkeys effort to be well sniffed out by Harps netminder Joe Boyle.
Harps were then indebted to Pat Loughrey who cleared a Ryan McConnell effort off the line on 9 minutes as Rovers set about their business by trying to dominate the early proceedings..
The game could have been different though as one of the games main talking points arrived on 18 minutes when Gabby Aduaka was adjudged to have broken the offside trap before home keeper Rory Kelly into a super save and from the ensuing play Corey McBride was upended in the box but the loud penalty appeals from the Harps contingent were waved away by match referee John Coll.
Keelin McGill then headed wide from a McBride corner for Harps but chances were limited in the opening period with shots just wide and over from either side through Christy Connaghan and Darren McElwaine the nearest any side came to breaking the deadlock in the closing stages of the half.
The second half was a much more lively affair and it was Rovers who could have taken the lead shortly after the interval when Boyle made a great stop from BJ Banda before Brian McVeigh hit the bar with a cracking effort from distance whiel Bandas header from that rebound shaved the post.
Rovers though did break the deadlock on 55 minutes when Lee Toland’s well weighted free kick was headed home by Ryan McConnell much to the delight of the home support.
Rovers did threaten to double the advantage and Ryan Lonergan-who had a good game- forced Boyle into a super stop just after the hour mark and although harps looked lively on the break they never really threatened Rory Kelly’s goal.
Christy Connaghan then came close with a sweetly struck effort on 83 minutes as Rovers pressed for the 2nd goal while Rovers Darren McElwaine also struck the post in stoppage time but Rovers gain a much needed three points and a welcome clean sheet.
Finn Harps Reserves: Joe Boyle, Lee McLaughlin, Pat Loughrey, Keelin McGill, Joel Bradley Walsh, Jack Doherty, Corey McBride, Darren McElwaine,Gabriel Aduaka, Ronan Gallagher, Jamie Browne. Subs used: Ryan Finn, Zach Gorman, Rian Aktepitanyi, Steven Black, Tom Mullan.
Letterkenny Rovers: Rory Kelly, Ryan Lonergan, Lee Toland, Conor Tourish, Ryan McConnell, Brian McVeigh, Kevin McGrath, Christy Connaghan, Chris Malseed, BJ Banda, Declan Sharkey. Subs used: Darren McElwaine
Referee: John Coll.
Fanad United 0
Bonagee United 1
A goal after four minutes by Garbhan Grant settled this Ulster Senior League match that was switched from Fanad to Bonagee.
The game was played in blustery conditions which hampered both teams. The only goal of the game arrived after four minutes when Grant was set up at the edge of the box and he fired low into the bottom corner.
Five minutes later Emmet Friel hit a fine shot from 25 yards that Eoghan Jordan did well to tip over the bar.
Jordan was called into action again in the 15th minute and he produced an excellent full length save to deny Jordan Armstrong.
Fanad started to gain some possession and in the 25th minute Dean McCarry went on a good run down the right and his dangerous cross into the box was just missed by the onrushing Fanad forwards.
A minute later Armstrong broke clear but his shot was well saved by the feet of Jordan.
The second half followed the same pattern with both sides enjoying spells of possession.
Three minutes into the half Corey Brogan's cross into the box was missed by Grant.
Seven minutes later Ryan Rainey was unlucky to see his deflected wide of the post.
Bonagee introduced Dean Larkin on the hour mark and he had a chance four minutes later when he shot wide when well placed.
Shortly after Larkin found himself through on goal but Jordan produced a superb save to deny him.
Fanad started to push for an equaliser after that and had a few half chances.
The clearest came in the 72nd minute when McCarry's dangerous cross into the box was missed by a number of Fanad players.
And with time running out a scramble in the box seen shots by Seamus Friel and Edward O'Reilly blocked.