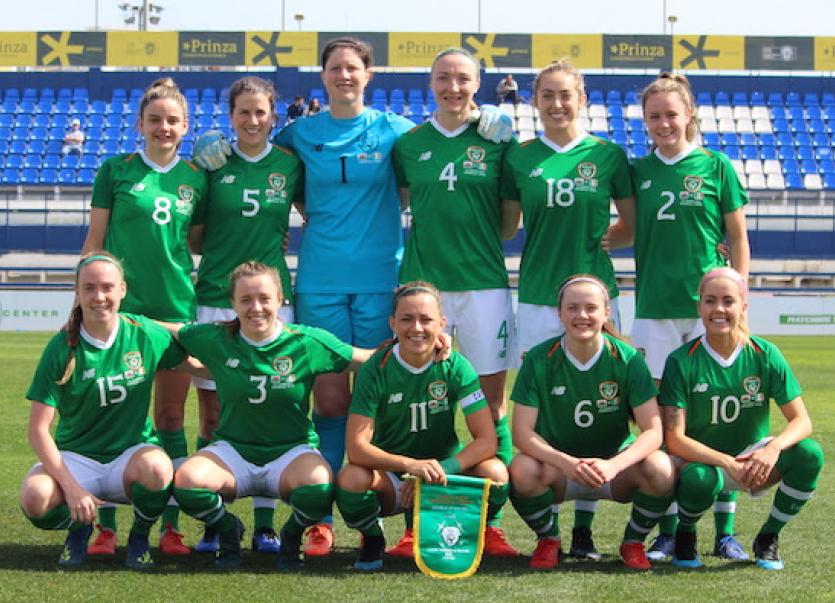 The starting Repulic of Ireland team against Wales

Tyler Toland  and Amber Barrett helped Ireland to a friendly win over Wales in Marbella, thanks to a second half headed goal from Louise Quinn.

Ireland dominated the vast majority of the contest in the Estadio de Municipal Marbella and end the international camp with an impressive victory over a strong Welsh side.
Defenders Diane Caldwell and Megan Campbell both missed the international friendly through injury whilst striker Emily Whelan was sidelined through illness.
Claire O'Riordan came into the starting line-up to replace Campbell in Colin Bell's only change to the team following the 0-0 draw against the same opposition last week.
In the blistering Spanish heat, both sides struggled to create openings during the first-half at the Estadio de Municipal Marbella. The closest Ireland came during the first-half was three minutes from the break through full-back Harriet Scott.
The tireless Leanne Kiernan retrieved a loose clearance on the right and her cross was only punched away as far as the on-rushing Scott, who failed to adjust in time as her shot was blocked.
After the break, Ireland were the far superior team throughout and almost went ahead in the 61st-minute. After a 15-pass move from Colin Bell's side, the Welsh defence cleared the ball out to Quinn who fired a shot narrowly over the bar from 30 yards.
A minute later, Quinn had her goal. Heather Payne won a free-kick on the right and Tyler Toland's pinpoint cross found the Arsenal defender who rose highest to head home.
It was a quiet 45-minutes for goalkeeper Marie Hourihan as Ireland defended stoutly throughout and secured the victory they deserved after the 10-day international camp in Marbella, Spain.
"It's a fantastic victory for the team and I'm absolutely delighted with the players. I felt we struggled with the Welsh press in the first-half but really kicked on after the break and deservedly won," said WNT Head Coach Colin Bell.
"It's been a great 10-day camp with the team, fantastic effort throughout from the entire squad and I would go so far as to say this is the best camp I've had with the team during my time here. The second-half performance was excellent, we had a number of brilliant phases of play and I'm delighted for the team to get the win.
"It's a huge confidence boost for the team of course, heading into those qualifiers in September. Wales are a second-seed so it shows we can mix it with these teams and get results against them, which is what we need to do to qualify for a major international tournament.
"The effort, the commitment and the desire from every single member of the team throughout was exceptional and we look forward to our next camp in April when we head to Italy."