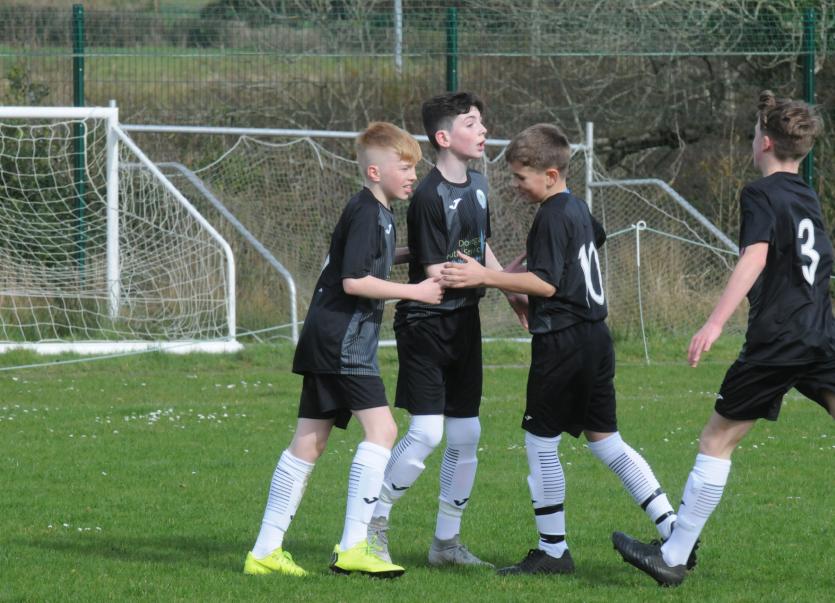 Shaun Patton (centre) celebrates one of his three goals

The first ever Finn Harps U13 squad made a winning start to the brand new National League for this age-group but had to hold on a bit in  nailbiting finish after leading 3-0 at half-time against Sligo Rovers.

Played at the Illistrin Schoolboys Grounds, Kevin McHugh’s boys played some fine football in the first half and were full value for that lead, having also missed a penalty and probably should have bagged at least two more goals. It was a special day for striker Shaun Patton who scored all three goals for the hosts.

The Harps intensity levels dropped after the interval and that allowed the Sligo back into the game. Goals in the 56th and 62nd minutes gave the visitors real hope of getting something from the game which was watched by a decent sized crowd. All the goals were netted at the Main Road end of the grounds and the hosts were out of the traps quickly forcing an early corner, courtesy of ex-Kilmacrennan Celtic lad Ciaran Cassidy. The impressive former Mulroy Academy player Aaron McLaughlin swung in the corner which was turned over the bar by Patton.

Patton was at the centre of the next piece of action on 11 minutes after McLaughlin had been taken down in the penalty area following a pass from big central midfielder Tiernan McGinty. However, Patton’s spot-kick was blazed over the crossbar. But, credit to the ex-Drumkeen Utd striker who kept working and found the back of the net in the 17th minute when McLaughlin’s accelerated through a gap in the Sligo defence before unselfishly squaring the ball for Patton to steer into the net. McGinty, Patton and Shane Ellison all came close to increasing the Harps lead.

Patton had another goalbound effort blocked on 25 minutes. The Harps 13s deservedly doubled their advantage on 27 minutes when Joel Gibson’s strike took a deflection of Patton which took the ball past stranded the Sligo keeper. Gibson twice came close to making it 3-0 before the half-hour mark with a shot that was initially blocked and the ex-Raphoe Town lad saw the rebound attempt go over the bar.  Six minutes before the break Patton did make it 3-0 with a delightful lob that gave the keeper no chance. Just before the interval Gibson missed a glorious chance to extend that advantage further.

With both sides using most of their squads - players rolling on an off as per the league rules, any expectations that Harps were going to win by a bigger margin began to fade as the hosts struggled to impose themselves for most of the second half.  Owen Elding gave The Bit O’ Red a lifeline with a fine finish in the 56th minutes. And six minutes late the game became even tighter as big Cian Carthy headed home a corner. Credit to Harps who lifted their game somewhat from that point and Patton raced cleared on 65 minute, pushed the ball past the keeper but the angle was just a bit acute and the striker’s effort was cleared by a defender.

McGinty hit the sidenetting from close range after an excellent Patton cross. With three minutes remaining the visitors best chance of an equaliser fell to Elding but keeper Shane Adair was equal to the attempt.  Kevin McHugh’s squad play their first away game next weekend when they take on Mayo.