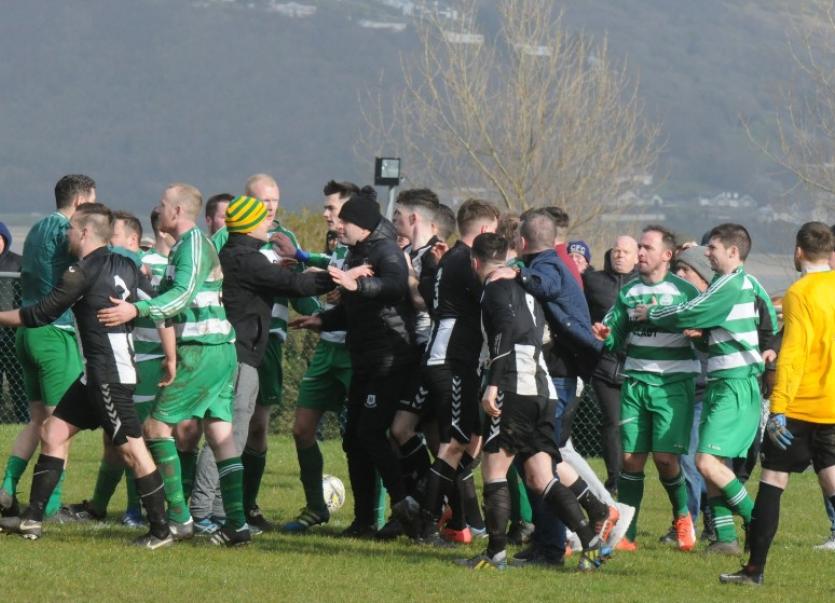 One of a number of melees in the game on Sunday

Kilmac had been down to nine players following the dismissals of both Kieran Gorman and Daire McDaid at the Flagpole in Rathmullan and just before the end of the game referee Alistair Gourley brandished further red cards to Castlefinn’s Gary McNulty and another Kilmac player Mark Friel following a melee where a number of players had been involved.
Kilmac club official Adrian Doherty, who was a linesman, was also banished from the sideline by the match official just after Daire McDaid was shown his red card. And it was confirmed that another Kilmac club member was given a red card after the match.
The result means Kilmac remain four points clear of Castlefinn but the latter do have two games less played. The leaders now have three games left while Castlefinn have five fixtures remaining.
This clash was expected to be feisty and there was an early example of what might be coming when Kilmac defender James Doherty went down holding his head after just a couple of minutes. Castlefinn had an early strike from J.P. Malley which was comfortably held by Liam McBride in the sixth minute. But, as the keeper was about to clear an ‘off the ball’ incident occurred that resulted in Kilmac’s Kieran Gorman receiving a straight red card.
That clearly rocked the hosts and it was the visitors who enjoyed more of the attacking action in the opening half-hour but they didn’t seriously test keeper McBride at any stage.
He easily held another Malley effort on 23 minutes. The strong crossfield breeze made for difficult playing conditions with Kilmac’s best chance coming from a 29th minute Enda McCormick free-kick that saw Ryan Shields rise to challenge keeper Chris O’Donnell but ref Gourley deemed it a foul and awarded a free out. The hosts played better in the closing stages of the half and Daire McDaid just couldn’t get control of a super through ball from Seimi ’Nanny’ Friel as the advancing keeper did well to advert the danger two minutes before the break.
There was a lively opening to the second half with both sides trying to carve out that chance to break the deadlock. Ian Ward and Ronan Tourish saw shots go over the bar for Castlefinn and it was the same story for Chris Dillon and Daire McDaid at the other end. Kilmac, who play all their home games in Rathmullan, twice came close to taking the lead after the hour mark. First Daire McDaid got free but his rasping low drive was brilliantly blocked by outstretched leg of keeper O’Donnell. McDaid was alert for the rebound but this time the striker’s attempt was blocked out for a corner. O’Donnell came to the visitors’ rescue again on 67 minutes with another super reflex save to deny Seimi ‘Nanny’ Friel following a McDaid corner.
On 72 minutes Kilmac were reduced to nine men when Daire McDaid was sent for an early shower for a second yellow card offence with referee Gourley deeming that his handball was deliberate. And Kilmac club official Adrian Doherty who had been one of the linesmen was also banished to the dressingroom after coming onto the field to have words with the match official.
Those incidents set the tone for heightened tensions in the closing stages with Castlefinn’s Foy and Kilmac’s James Doherty also being booked by the ref.
The visitors made a couple of substitutions in a bid to win the game; a shot from one of the replacements Rory Dalton which whizzed narrowly wide, while Raymond Foy just couldn’t get on the end of a cross which was the last chance of the game.
However, it wasn’t the last action as first players from the two opposing teams and others including supporters became involved in some ugly scenes just before the end of the game. Those incidents resulted in referee Gourley brandishing two further red cards to Kilmac’s Mark Friel and Castlefinn substitute Gary McNulty.