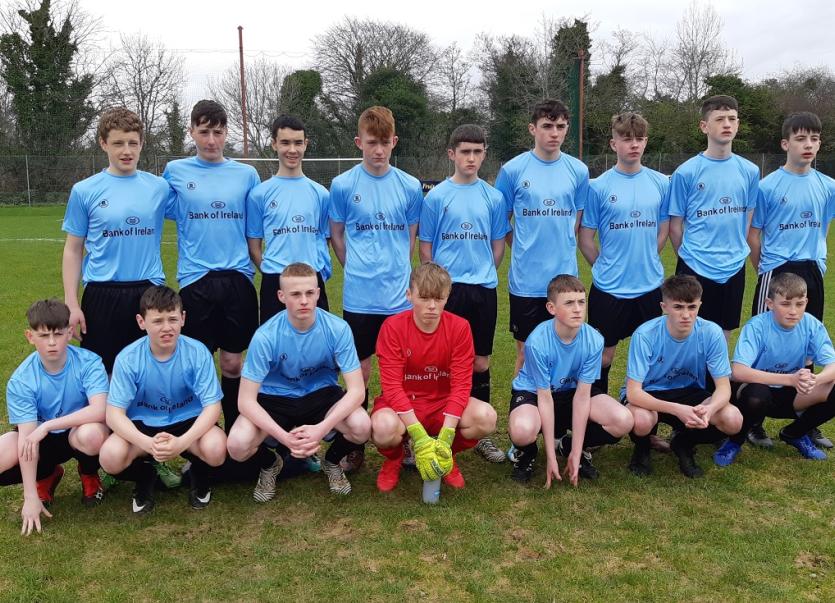 PCC pictured before their semi-final win in Donegal town

Reigning All-Ireland champions Pobalscoil Cloich Cheann Fhaola are back in the U-15 Minor All-Ireland Schools final after their win today over Coola Community College, Sligo.

In the semi-final at the Hospital Field, Donegal Town, PCC struck in the second half with two goals in a ten minute period which sealed the issue.
The Sligo school were hoping to gain revenge for an All-Ireland final defeat at the hands of PCC last year, but they came up short.
PCC started the game really well and had a number of chances in the opening 15 minutes, hitting a post and also having a point blank effort from Paul Johnston saved in the first minute.
The Sligo side came into the contest and had one great chance on 17 minutes but Oran Craig got back to save on the line.
Coola were dominant at the start of the second half before PCC struck with a left footed volley from Tiarnan McGinty which found the net.
They doubled the lead within 10 minutes when McGinty went down the wing and crossed for Paul Johnston to score.
It will be a busy couple of weeks for four members of the U-15 panel, who are also on the starting team of the school's U-17 team, who are also in the All-Ireland final. Those four members are Darragh Ferry, Paul Johnston, Oran Craig and Ethan Doherty.
The U-15 final will be against either the Munster or Leinster champions, who meet on Thursday.