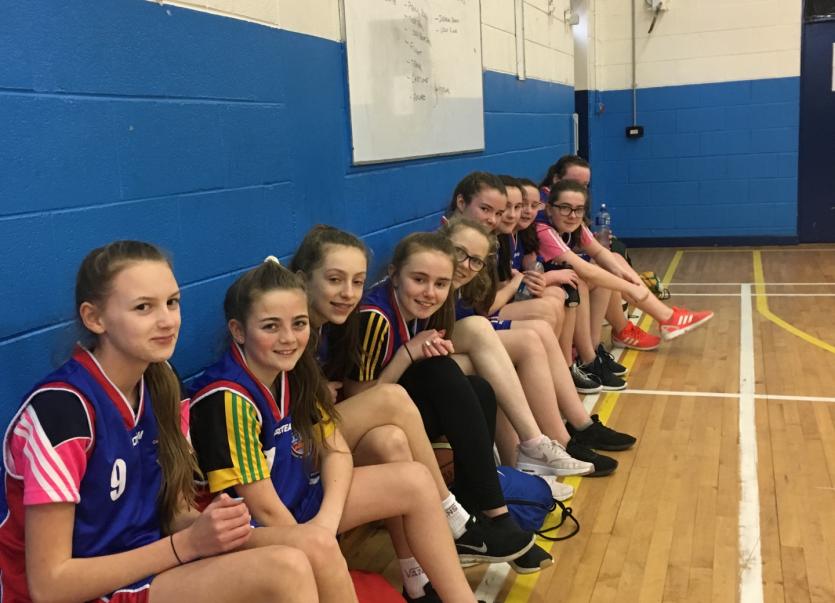 The First Year Girls of Coláiste na Carraige overcame stiff competition on Tuesday to advance to an All-Ireland semi-final at the National Arena in Tallaght against Coláiste Treasa Kanturk on Thursday 2 May.
At a four team play-off in Glenamaddy, Co Galway they overcame St. Leo's, Carlow 34-30, Loreto Cavan 42-25 and Glenamaddy CS 22-9.
This is a tremendous achievement for a small school with only 24 girls in First Year to choose from. Loreto Cavan has over 650 students, St. Leo's Carlow over 1,000 . . . both all girls schools!
The first game against Carlow was the key match. In a tough opening quarter Lily McDevitt kept the Donegal girls in it with a couple of strong drives to the basket. Trailing 8-4 at the end of the first quarter, Coláiste na Carraige upped the intensity with Eva Gallagher and Cora Diver to the fore in the second quarter, pulling into a 15-12 lead. The second half was a cagey affair, it could have gone either way. With a minute remaining and the score tied at 26-26, a set play out of a timeout saw McDevitt make a brilliant move to the boards to retake the lead. In the closing seconds Niamh Boyle shut the game out with a bank shot.
In the following match against Cavan, Carrick were always winning, but it wasn't until the third quarter that they really came alive. In a brilliant team effort Cora Hegarty really stood out, contributing six points as Carrick took a 15 point lead going into the last. Fast breaking basketball coupled with their aggressive defence saw Carrick comfortably see the game out.
The last match of the day was something of a formality. Again Carrick led from the start, with Dearbhla Meehan, Emer Carr and Eimear McShane all getting involved in the scoring.
There's going to be a great buzz in the community as the girls get ready for the next stage of the competition. They've excelled along the way winning the North West regional title, then the play-offs. Here's hoping they can go a step further on 2 May.
Team: Eva Gallagher, Lily McDevitt, Niamh Boyle, Cora Hegarty, Ciara Diver, Emer Carr, Kate Byrne, Grace Byrne, Dearbhla Meehan, Tara Gillespie, Aoibhe Curran, Eimear McShane, Erin Byrne, Eabha McLaughlin, Demi McLoughlin, Olivia Ellis.
Coach: Simon Waugh.