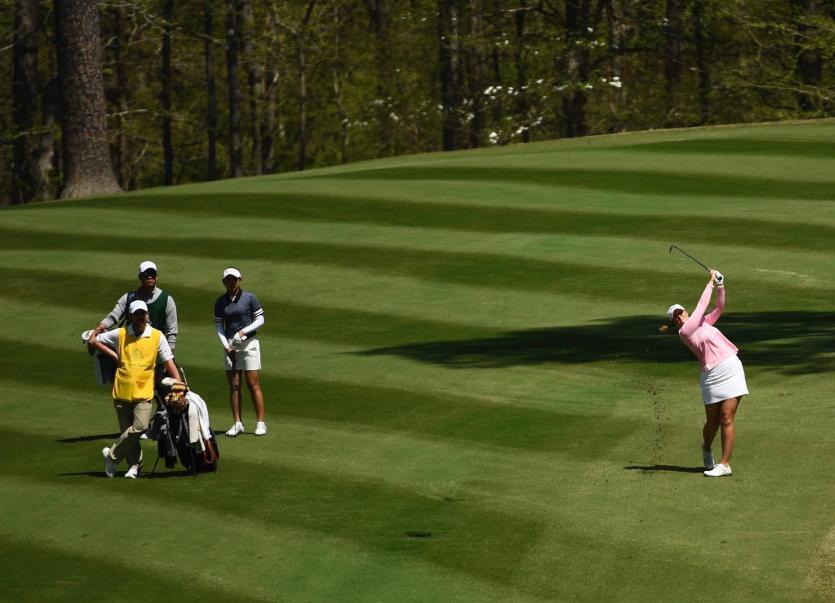 On the biggest week of professional golf as the best players travel to Augusta for the US Masters which starts today, a Ballyshannon man made history on Saturday last at the course.
Donal Scott, a Irish PGA Professional, was inside the ropes as caddie to Irish amateur international Olivia Mehaffey at the Augusta National Women's Amateur Championship.
It was a first for women golfers at a course that did not allow female members until 2012.
34-year-old Scott, who progressed from being one of the most enthusiastic young golfers at Bundoran Golf Club, is now one of the most respected coaches in Irish golf, amateur and professional.
"It was an amazing experience, very special. It was the first time a women's tournament was held there," said Scott, who had gone to the US as part of the support team for Olivia, but then they were informed that coaches could act as caddies and the Ballyshannon man got the dream job.
"I met Olivia about five years ago when I was coaching for the Irish Ladies Golfing Union and we have been working together since."
Scott is a very busy coach and rarely gets time to play much golf nowadays. He was a most enthusiastic young golfer, and that enthusiasm is still there in his coaching role.
"If I won the lotto in the morning, I would still want to continue golf coaching for free," he said.
He has graduated to his present position thanks to hard work, initially under the direction of Bundoran Golf Club professional David Robinson and then after completing his degree in sportsmanagement at UCD, he did his PGA apprenticeship under a former Bundoran Golf Club colleague Gareth McShea, who is the professional at Edmonstown in Dublin.
"I still have the enthusiasm for golf, but now it is for coaching. I suppose I knew after graduating that I was never going to make it playing, but I have developed a passion for coaching. I'm always checking out others, how they swing it, how the putt and chip.
"After deciding that I wasn't going down the road of playing I have dedicated my efforts to be the best coach," said Scott, who paid tribute to the role played by David Robinson in Bundoran and Gareth McShea in Dublin in his career.
"Every time I get home, and it is only about four times a year now, Jim and Nancy (parents) are glad to see me and I'm always made feel welcome at Bundoran Golf Club. I would have great friends in Dublin in the McFaddens and we have the annual Memorial Outing in memory of Patrick McFadden."
Donal spent seven years in Edmonstown before joining the ILGU coaching group, and he has progressed through the ranks to being one of the national coaches for the group at present.
He also carries out coaching with personal clients, both amateur and professional, and does consultancy work with the Danish squad as well as being involved with the Paddy Harrington Maynooth Foundation, which helps college golfers who might not want to take up scholarships in the US.
On Tuesday Donal was at Heathrow Airport in London en route home from his big week in Augusta and could rightly claim to have one up on his mentors David Robinson and Gareth McShea, but he quickly replied: "I'm not sure if I will ever have one up on them boys!"
He has been to many venues with teams as Irish national ILGU coach including to British Opens at Woburn and Kingsbarns.
His involvement as coach with Olivia Mehaffey has taken him to the US a few times a year and he keeps a close eye on all those involved in the High Performance group at national level.
He feels that there is great potential for Women's golf with the likes of Stephanie Meadows and Leonie Maguire have her breakthrough win last weekend.
"I can see Olivia follow in their footsteps and their breakthrough will give other girls the belief. There is a tipping point and there is no reason which Irish girls can make the grade."
But for now the highlight of a very busy career has been that Augusta experience. "It is a place rich in history and before we went out on the course, those involved were given a tour of the clubhouse, the Founders Room.
"Being out on the course you get an overload of the senses, playing a shot off the pine needles at the 13th, the famous 12th and 16th. You think of Jack Nicklaus's putt on 17, or Sandy Lyle's shot from the bunker on 18 or Bubba Watson. It was an amazing experience."
There will be plenty of stories for Donal to tell to Jim and Nancy and to the McFaddens and especially to David Robinson and Gareth McShea, because he really does have one up on them now. The pupil was a Master for a day!