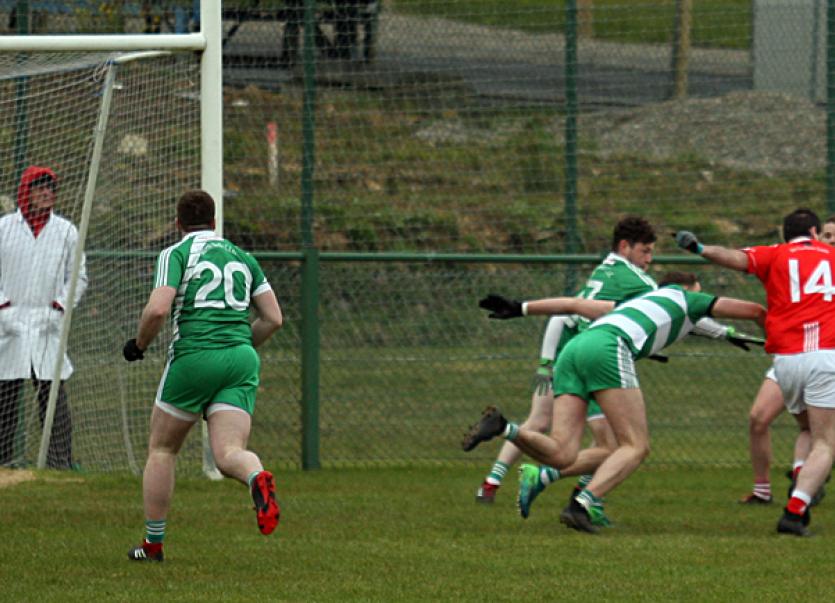 Conor Greene about to fire at the St Nauls goals Picture: Thomas Gallagher

Dungloe got their first win of the season when they edged out St Nauls in Gerald Gallagher Memorial Park, Mountcharles.

It took a goal from Daniel Ward with just over six minutes remaining to decide this very close encounter.
St Nauls were short a number of personnel, not least Brendan McCole who picked up an injury in the local derby against Four Masters last week. The Parish of Inver side were also short the suspended Barry Griffin, while Peadar Mogan didn't play as he is off for a week's trial to Australia this week.
With the cold wind at their backs Dungloe were quick out of the blocks with points Adam Neely, Danny Rodgers, Noel McBride and Daniel Ward.
But St Nauls hit back with a goal from young Michael Coughlan. There was just a point between them at the break as further points from Rodgers, Conor Greene and two from Adam Neely had Dungloe ahead by 0-8 to 1-4. Cathal Lowther and three Stephen Griffin points were the other St Nauls scorers in the opening half.
Points from Noel McBride and Matthew O'Donnell stretched the Dungloe lead early in the second half, but the home side were back on terms thanks to the accuracy of Griffin and Stuart Johnston.
There was a change of 'keepeer for the home side midway through the second half as Lee McBrearty replaced Gavin Mulreany, who had to return to his work in Finner.
The tie was decided in the final minutes when Daniel Ward struck for the Dungloe goal and they held on to take the points.
Dungloe had lost their opening encounter to Killybegs, so this was a welcome two league points for what is largely a young squad. St Nauls were hampered by the absentees. They again started with Stephen Griffin at centre-back but moved him forward in the second half. Stuart Johnston also impressed for the home side.