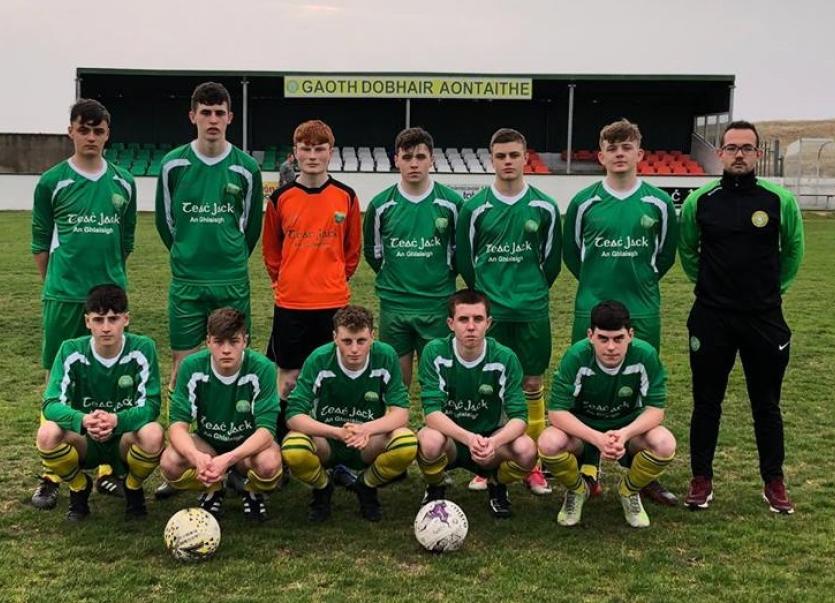 Gweedore United F.C. 2
Eany Celtic F.C. 3
This game played in glorious conditions under the lights at Carickboyle saw the visitors come away with a good 3 points.
United got off to a great start playing good football and looking dangerous in attack. United seen early chances from Stephen Mc Fadden and Aidan Griffin. However the Eany defence stood firm and the visitors looked good on the counter attack.
The visitors took the lead in the 32nd minute when a pacy Jack Byrne beat the offside trap on the break to slot past Peadar O Baoill in the United net to make it 1-0. The game continued at a good pace with United pressing and Eany continuing to look threatening on the break. Eany got their second goal on the stroke of half time when Donal Buckley tapped in from close range following a corner.
In the second half United went at Eany to try and get back in the game and seen decent chances from Ronan Heffernan, Stephen Mc Fadden, Shaun McFadden and Kyle Doohan, however just couldn't get the breakthrough.
In the 57th minute United pulled one back when Stephen Mc Fadden converted a penalty. In the 88th minute Donal Buckley got a third for Eany when he tapped in from three yards after a free kick by Nathan Maxwell.
Gweedore pulled one back in the 90th minute when Stephen Mc Fadden again on the mark scored a good free kick to make it 3-2 on the night. In a tight encounter, Eany converted their chances and United will consider this game as one that got away.
Referee: Seimí Ferry.

Fanad United Yths 1
Bonagee United Yths 1
Fanad United and Bonagee United Youths played out an entertaining 1 all draw in the Youth League on Wednesday evening at Traigh-a-Loch
Bonagee were quickest out of the traps and took the lead in the 12th minute. Peter Carr cut in from the left and when his shot from a tight angle struck a Fanad defender and went into the net. 5 minutes later, Carr was set up by the impressive Jack Murphy but hos shot was well saved by Dan Kerr in the Fanad goals. Fanad started to apply some pressure and got an equaliser in the 35th minute. When Fanad were awarded a free kick, the ball was cleared to the edge of the box where it was met by Aaron Reid who hit a superb volley into the top corner.
The second half followed a similar pattern with both sides enjoying spells of possession. In the 65th minute, Jack Murphy seen his well hit free from 25 yards held by Dan Kerr. 10 minutes later Peter Carr shot over when well placed. Fanad did have a chance to get the winner with 10 minutes remaining. Shaun Kerr went on a good run down the left and when his ball into the box was met by Kane McLaughlin, he was denied by an excellent save by Cian Harkin. Jack Murphy had another few efforts from long range but both sides settled for a draw.
FANAD UNITED: Dan Kerr, Dale McBride, Liam Sweeney, Ryan McGinley, Liam McGrenaghan, Mark Gallagher, Shaun Kerr, Joshua McAteer, Aaron Reid, Mark McBride
Subs Used: Darragh Shiels
BONAGEE UNITED: Cian Harkin, Serge Alcorn, David Boakye, Taylor Cassidy, Dylan O'Brien, Jack Murphy, Peter Carr, Adam Murphy, Jason McCullogh, Liam McAlalary
Subs Used: Adam Carr, Caolan Maltha
Referee: Liam McConigley

Keadue Rovers 7
Swilly Rovers 0
Keadue Rovers Youths kicked off their 2019 campaign with this impressive victory over Swilly Rovers Youths at Central Park on Wednesday evening.
On a good evening for football, Keadue had the brighter start and after 4 minutes, a good move down the left wing by Mikey McFadden led to a ball to Orrin Burgess, who finished with a slightly scuffed effort to the net. Keadue were motoring well and the game was at a good pace, when on twenty two minutes, the ball broke to Orrin Burgess 25 yards out and with the visitors defence backing off he unleashed a super effort to the top right corner of the net.
Just after 25 minutes, Keadue put the game beyond reach when Ben Boyle’s kick out was met by the onrunning Aidan McHugh who nipped in behind the defence to poke it to the net.
As the game went past the half hour mark the tempo slightly dropped, becoming a bit more scrappy before Swilly had their only real chance of the half with an effort from the edge of the box easily saved.
The visitors started the second half reasonably brightly and had a headed effort just over the bar on 47 minutes. On 55 minutes Keadue's talisman Orrin Burgess was through but his shot went wide. Three minutes later and a fine team goal from Keadue as good passing between Peter McGee and Aidan McHugh led to a good cross on the right hand side and Jack Doherty tapped in for number four.
The home team were really flowing now and on sixty four minutes it was five, when Orrin Burgess this time making no mistake firing low to the net. Swilly, to their credit never lay down and tried moving the ball around quickly but were met with a very solid Keadue defence. A few more subs on both sides were made and on seventy minutes Aidan McHugh robbed the Swilly defence, before tucking away the sixth.
Keadue continued at a fine pace and on eighty minutes, they made it seven when Jack Doherty flicked a fine finish to the net for the final goal in what was a really fine display and one that augurs well for the season for Keadue.
A good, spirited performance from Swilly who never let the heads down while for Keadue it was an excellent performance with standout men Orrin Burgess, Jack Doherty and Peter McGee.
Referee: Liam McLaughlin.

Milford Utd 1
Letterkenny Rovers 2
Letterkenny Rovers got off to a flyer after Conor Friel scored on 37 seconds when tapping home from close range after Jack Dwyer had pressed a defensive backpass to create the opportunity,
Friel doubled the lead on 18 minutes when gliding past three defenders before shooting home past the out stretched Eoin O'Donnell in Milfords goal.
Milford were thrown a lifeline on 70 minutes when Rory O'Donnell fired home a sublime free kick after a challenge on Conor Coll and milford had chance to level most notably through the left foot of Kyle McFadden while Rovers wasted a number of good chances to extend their lead with some profligate finishing eeing chances come and go for Friel, Dylan Doogan, Joel Gorman and Jack Dwyer.

Erne Wanderers 1
Lagan Harps 7
Erne's difficult start to the season continued as they lost out to a ramapnt Lagan Harps side.
The game got off to a blistering start with James Wilson netting for Lagan on two minutes before Noel Donnelly doubled the lead on 10 minutes.
Erne got one back through Marty McGarrigle but Lagan extended their lead before the break with a Donnelly double on 27 and 41 mnutes making it 4-1 before Wilson converted a 51st minute penalty.
Goals from Donnelly and Dean murray completed a win which was Gavin Murrays sides first victory of the campaign.