Donagh Kelly back on winning ramp with win in Monaghan Rally 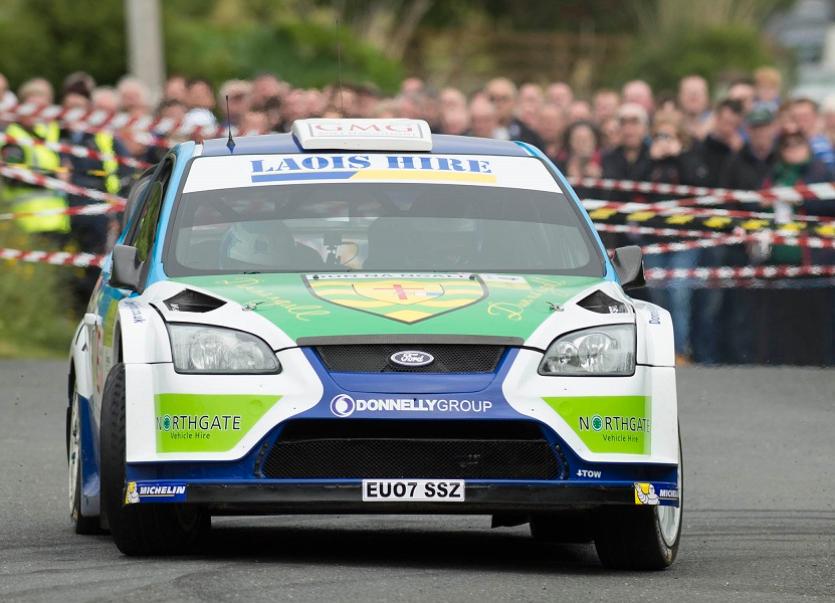 Donagh Kelly . . . back on the winning ramp in Monaghan

In a dramatic final loop Donegal’s Donagh Kelly and his Monaghan co-driver Conor Foley in a Ford Focus WRC withstood the strong challenge of Monaghan’s Josh Moffett (Ford Fiesta WRC) and Wexford’s Andy Hayes to win the Monaghan Rally, round three of the Triton Showers National Rally Championship by a margin of 5.7 seconds.
Clonmel’s Roy White and his Cork co-driver James O’Brien (Fiesta WRC) were 27.1 seconds further behind in third.
On the 11.76km opening stage Josh Moffett was 3.8 seconds ahead of last year’s Monaghan winner Donagh Kelly (Ford Focus WRC) with Roy Whyte’s Fiesta 3.6 further behind and 0.7 of a second ahead of the Fiesta R5 of Sam Moffett followed by Declan Boyle’s Fiesta WRC, 0.6 of a second further adrift in sixth.
Josh Moffett was also quickest on the second stage and then on the very technical third stage - the longest of the rally at 16.08 kilometres - he took total command with a stage time that was over seven seconds better than any of his rivals.
At the Monaghan service, Josh Moffett led Kelly by 15.5 seconds with White another 6.7 seconds in arrears. The rally leader opined, “Yes I really liked that last stage (S.S. 3) it’s very technical, but the tyres went off, they were too soft.” Second placed Kelly, who had no launch control for the opening stage, commented that he enjoyed the opening loop. White, in third, was pleased with his performance and reckoned that the tyres worked really well.
A cautious Declan Boyle (Fiesta WRC) was fourth followed by Sam Moffett, who reckoned his Fiesta R5 was down on power. Sixth placed Darren Gass (Skoda Fabia R5) lost time having opted for a soft compound tyre. Former national champion Peadar Hurson overshot on the third stage, hit a bale that did some cosmetic damage to the left front left wing of his Ford Fiesta WRC, he too was on the wrong tyres. Donegal’s Joe McGonigle’s Mini WRC suffered a misfire on all three stages but he was confident of sorting the issue at the service park.
The top ten was completed by the Toyota Corolla of top two-wheel drive exponent Donegal’s Kevin Eves and the Ford Focus WRC of Welshman Hugh Hunter, who changed the settings for the second stage but reverted to the original settings for the third stage where he had issues with the steering mechanism. Local driver Shane Maguire led Motorsport Safety Team Group N category but his Mitsubishi was overheating and also had a misfire, he led the similar car of Wexford’s Tomas O’Rourke by 14.8 seconds with Tyrone’s Gary Cairns (Mitsubishi EvoX) 27.6 seconds further behind in third.
There was little between Josh Moffett and Kelly through stages four and five, however, on S.S. 6, Moffett’s Fiesta WRC suffered a rear left wheel puncture and lost considerable time as Kelly arrived at the final service as rally leader - 15.9 seconds ahead of Moffett. The new rally leader reckoned he should have been on a softer tyre but was quite content as he continued to build his pace on what was his first time in the car since last year’s Donegal International Rally. A disconsolate Moffett was at odds to explain the circumstances of the puncture.
Meanwhile, White - just two tenths of a second behind in third - was untroubled as
Boyle occupied fourth but was concerned about a differential problem. Sam Moffett’s Fiesta R5 benefitted from a change of spark plugs and a new coil pack.
Darren Gass (Skoda Fabia R5) was in sixth place with Eves continuing to rule the two-wheel drive category whilst holding an impressive seventh in general classification. The top ten was completed by Declan McCrory (SubarWRC), Joe McGonigle (Mini WRC) and the Ford Focus WRC of Hugh Hunter.
Peadar Hurson (Ford Fiesta WRC) slipped to thirteenth when he spun at a hairpin and with no reverse gear and no spectators to help him, took considerable time to get back on track.
Despite a continuing misfire, Shane Maguire (Mitsubishi) continued to lead the Motorsport Safety Team Group N category.
A charging Josh Moffett took 5.8 seconds from Kelly on S.S. 7 to cut the deficit to 10.1 seconds. The margin was reduced to 5.3 seconds when Josh Moffett punched in the best time on the penultimate stage. However, Kelly withstood the challenge and was actually quickest on the stage to claim the additional Triton bonus point.
The top six remained unchanged with Boyle, Sam Moffett and Gass. Joe McGonigle (Mini WRC) backed off on the final loop and finished seventh.
Eves won the two-wheel drive category as local driver Michael Carbin (Mitsubishi) and Hurson completed the top ten, the latter spun again at the same location as he did on S.S. 6.
Shane Maguire and co-driver Anthony Nestor (Mitsubishi) won Motorsport Safety Team Group N category.