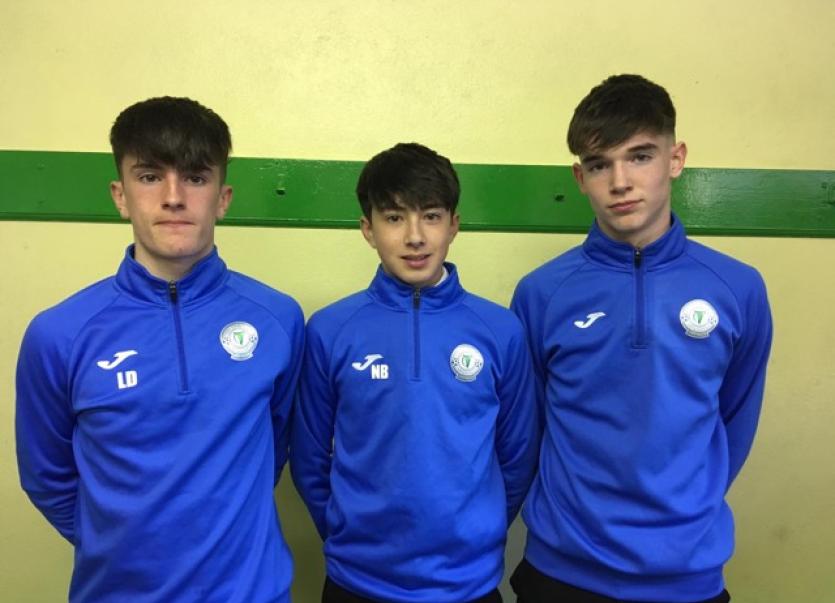 The Finn Harps U-15s struck for a late winner courtesy of striker Conor Campbell to defeat Cavan/Monaghan at An Screaban in Gweedore on Saturday in their fifth game of the National League season. The result puts Paul McBride’s side joint top of the Northern Elite Section of the National League.

Harps started off brightly and Josh Maxwell had the first opportunity after a through ball from Jamie Harris. A corner kick from Conor Campbell caused problems and was fisted clear by the visiting goalkeeper. Against the run of play the MUCFP striker shrugged off a challenge from Cuan Lafferty and was closing in on goal when Jamie O Donnell managed to nip the ball away from him. The visitors started to take control of the game midway.

However, in the 27th minute, Jamie McKinney, who had been outstanding all year intercepted, a through ball and initiated a great Harps counter by finding Harris who in turn found Campbell wide on the right. Campbell’s cross found Harris at the back post but his header went wide.

The hosts went in front in the 34th minute when Liam Donnelly got his second goal in as many games. Noah Barrett received the ball from goalkeeper Fintan Doherty carried the ball into midfield. A one-two with Maxwell allowed Barrett to play a sublime through ball for Donnelly to finish under the advancing keeper. Donnelly almost added another straight after as he turned and shot but the keeper did enough to parry the ball away.

Harps made a slow to start to the second allowing the opposition to press high up on the Harps defence. And the hosts paid a heavy price when in the 43rd minute MUCFP’s,Cian Brennan found himself standing over a free kick. His looping cross caught Doherty off his line to make it 1-1. The 48th minute introduction of Aiden McClosley gave  Harps an outlet on the left and his direct style caused the opposition defence no shortage of problems. McCloskey almost scored himself as he unleashed a powerful shot  which the MUCFP keeper did well to save.

Harps started to regain control and were piling the pressure on their visitors. Campbell was causing the MUCFP defence all sorts of problems and nearly scored but he just didn’t connect properly.

With 10 minutes to go Oisin McKelvey was introduced in place of Harris and his quick one touch play allowed Harps to open up the tight MUCFP defence. Skipper Cuan Lafferty almost scored when McCloskey sent in a great cross but he just couldn’t keep the header effort down . With the clock hitting the last minute of the game the hosts would have settled for a draw against a very physical MUCFP but Campbell had a different idea.

McCloskey’s cross from the left was cleared into the path of Harps’ left back Noah Barrett. Barrett beat two players  and cut inside to set up the oncoming Campbell who unleashed a shot from outside the box which flew past the keeper and into the back of the net. The Harps players, management and home crowd erupted into cheer and celebrations. The full time whistle blew and Harps now sit joint top of their league.

Next up is an away trip to Derry City in a second Northwest derby of the season on this Tuesday 7th April. The game will take place at Aileach (kick-off 6:30pm).