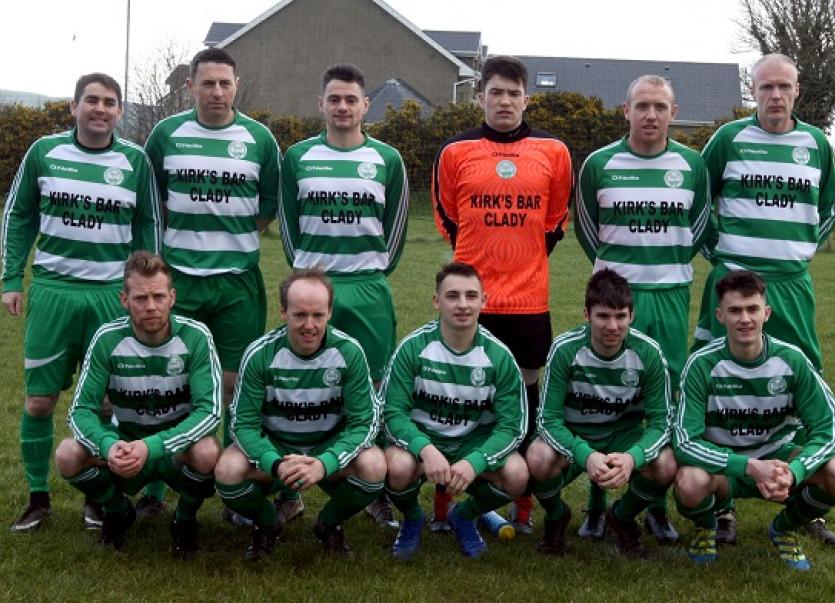 Castlefinn Celtic have  the destiny of the Brian McCormick Sports Premier Division in their own hands after their win over Cappry Rovers and a slip up by Kilmacrennan Celtic, who could onlyl draw with Kildrum Tigers.

Both sides have just one game left but Castlefinn have only to match Kilmac’s result on the final day to prevail as they lead the table by two points.

Castlefinn Celtic claimed all three points at Cappry Park in a game played in ideal conditions. Castlefinn took the lead in the 27th minute when a cross into the goalmouth from JP Malley was directed into the net by Cappry defender Darren Mc Gowan.

Castlefinn went in search of another goal but it was Cappry who should have levelled the score on numerous occasions only for good keeping and defending by the visitors.

In the second half Cappry had a few chances to level the match but were unlucky when the ball hit the post and the keeper made a few good saves.

Castlefinn scored their second goal in the sixty second minute when Raymond Foy was fouled and Emmet White scored from the spot.

Cappry kept pushing for a goal and were caught on the break in the seventy second minute when Raymond Foy chased down the ball to beat the keeper from close range.

Castlefinn got their fourth goal in the 87th minute when Raymond Foy beat the Cappry keeper to put the ball through to Corey Bogan who scored from close range.

The visitors were the brighter in the opening exchanges, pressing the home side back from the off. The first real chance of the game came from a Keadue cross which was headed wide by Cory Gallagher.

On 14 minutes Donegal Town took the lead when good work down the left wing led to a cross into the box where Ronan McHugh was on hand to fire into the net.

A minute later it was almost two when a right-wing cross was flicked wide by David Graham. Donegal kept on the front foot and were well deserved of their lead and they doubled it in the 21st minute when Joe McIntyre was on hand to clip home after Declan Ward in the Keadue nets had parried the initial attempt.

As the half went on Keadue did come into it and David Ward had a shot at goal but it went over the bar. In the last five minutes Keadue had two good opportunities and would’ve deserved a goal when Cory Gallagher had a shot saved and Jack Boyle had a shot from the edge of the area go wide after a goalmouth scramble. However it was not to be and Donegal Town came away with the spoils and the points necessary for another season in the top tier.

Kilmacrennan Celtic could only draw 1-1 at home to Kildrum Tigers and it could be a definig moment in the title race.

Kildrum took the lead on 12 minutes through a Glenn Bovaird free kick but Kilmac responded well and drew level on 32 minutes when Ryan Shields headed home a free kick.

Kilmac  tried to gain a valuable winner but the game ended 1-1 to hand Castlefinn the advantage.

Glenea took the lead after 30 minutes when they converted after a quick breakaway.

Arranmore came into the game after this but it was 1-0 Glenea at the break.

Good work from Paul Early set up Chris Mc Glanaghey for an equaliser.

Both teams pushed for a winner after this and Glenea found it with five minutes to go.