Errigal Cycling Club out in force at Rás Donegal 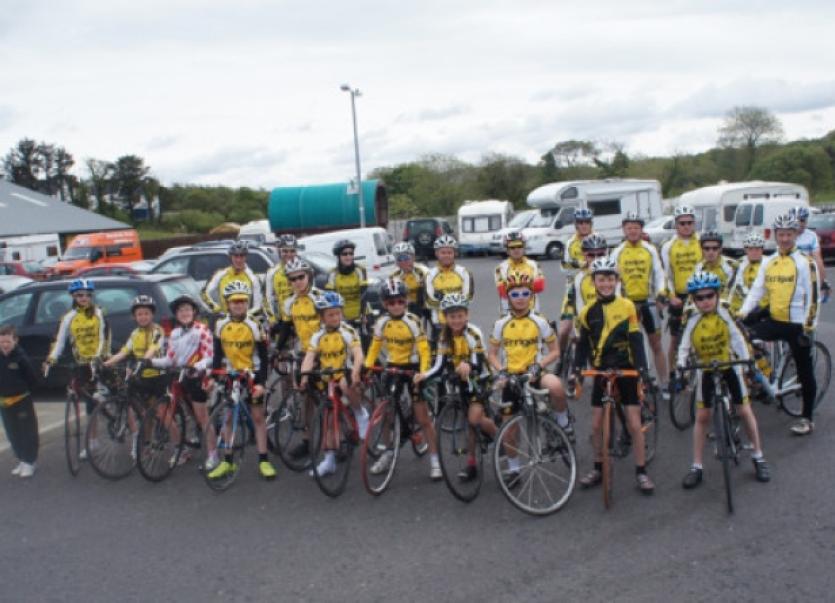 The race was held over four stages culminating in a finish at the top of Glengesh on Sunday afternoon.

From the off on Friday night, the pace was extremely high and this continued throughout the weekend, indeed the stage time of 1h 13’28” for the 32.4 miles was a course record. Unfortunately young Danny Hunter had to retire after Friday’s stage due to illness. However, despite losing an important member of the team, the boys each performed heroically throughout, none more so than Cormac who on the final day, had to work valiantly to pull back a break of four riders who had a lead of over two minutes at one stage, catching them on the final approaches to Glengesh.

Despite his efforts during the chase, Cormac then climbed Glengesh magnificently to take 6th place in a stage that started with 113 riders. For many cyclists to compete in the Rás is an ambition in its own right and congratulations are due to Mathew McKinley, Kevin Holian and young Jordan McGinley who all competed and finished the race for the first time.

Many commented on the large turnout of Errigal youths and accompanying adults who lined the route to the top of the mountain on Sunday in support of the boys, the yellow of Errigal was to be seen everywhere!

Special thanks should also be given to the Errigal support team of Sean Sweeney (Team Manager), Sean McFadden, Connor McIlwainne and Pat Kelly who looked after the boys brilliantly throughout the weekend.

The ever-popular Feile Annagry Road race took place on Wednesday night with the youth racing one lap of the seven mile circuit from Annagry – Loughanure – Crolly – Annagry and the adult race heading out along the cost to Dungloe and back via Loughanuire and Crolly. An impressive number of youths took part in both the U12 and U14 races with PJ Doogan first over the line in the U14, followed by Conor Halvey (2nd) and Michael McGlynn (3rd). In the U12 race Shauna McFadden won the sprint with Dylan Traynor to take 1st overall and first girl with Dylan (first boy), Odhran Doogan (2nd) and Ciaran Mulhern (3rd). In the adult race Ciara Doogan, who went away in the first group, rode magnificently on her own for most of the race to stay away from the chasing pack to win, whilst Ray Wilkinson and Pat Traynor, who were also away in the first group, also managed to stay away to take 2nd and 3rd places. In the first ever novice race to be held at the festival Hugh Bonner and Manus Sweeney rode valiantly around the full course with Hugh being first over the line whilst Manus was unfortunate to suffer a puncture when close to home, well done all!

The Tour Na Gaeltachta takes place this Sunday with the sign-=on in the PCC Falcaragh from 8.30 am with the tour starting at 9.30 am.

The sign on fee for all routes is €15 and includes a tea stop at Dore and Bar-B-que when the hard work has been done. Pace will be controlled as this event is based on something for every cyclist and with some of the best scenery in Ireland along the way it will be a great day out.

There will be an open race held for Under and Over 40 riders on the Termon Loop on Monday, sign on at 6.30pm in Termon with a 7pm start. This race is open to riders from other clubs.