Round-up of the action from Wednesday night 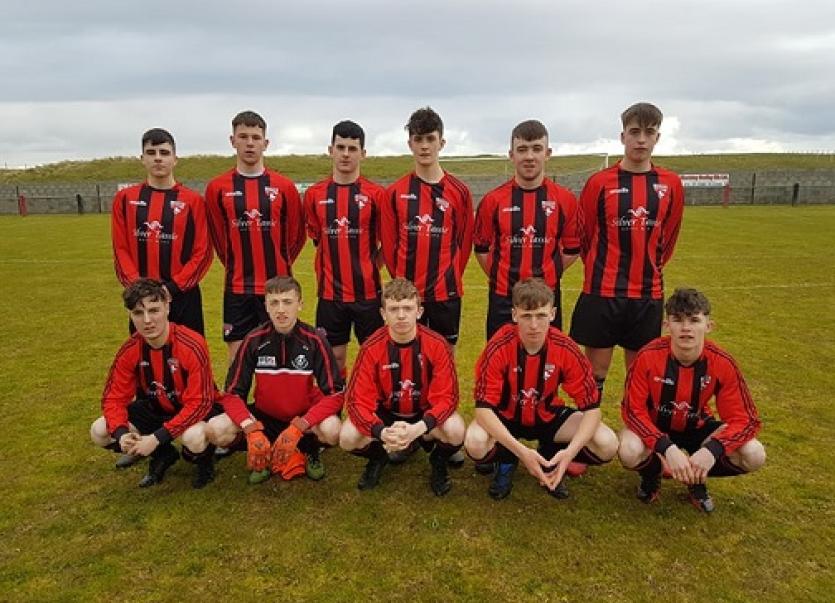 Swilly Rovers and Letterkenny Rovers lead the way after the latest round of fixtures in the Donegal Youth League on Wednesday night.

Here's a round-up of this week's games -

Fanad had the first chance in the 12th minute when Liam McGrenaghan's thumping free from 30 yards was well held at the second attempt by Lagan keeper Oisin Bonner.

Fanad then made their early pressure count 3 minutes later when they took the lead. There seemed little danger when Luke McCarry received the ball 25 yards out but he unleashed a superb dipping shot into the top corner of the net.

The lead however, only lasted 2 minutes as Lagan got an equaliser. After some good play the ball fell to Noel Donnelly 20 yards out and his shot found the bottom corner. Three minutes later Liam McGrenaghan saw another long range free fly just wide. Five minutes before the break Shaun Kerr's long range effort produced a fine save from Oisin Bonner who tipped the ball over the bar. Just before the interval, Fanad took the lead. When Lagan failed to clear a McGrenaghan shot the ball fell to Ryan McGinley who scored from close range.

In the early stages of the second half Lagan took control of the game and were awarded with an equaliser in the 50th minute. When the Fanad defence failed to clear the ball from a set piece, James Wilson pounced to finish into the corner.

Then 8 minutes later Lagan took the lead when Bradley Doherty's fine drive from 25 yards nestled in the net. Fanad responded and almost got an equaliser 2 minutes later when Darragh Shields lobbed the ball just wide when put through. Fanad then got an equaliser just after the hour mark. When John Friel swung in a dangerous free kick from the left, the ball fell to Ryan McGinley who scored his second of the night from close range.

With time running out Fanad came agonisingly close to getting a winner when John Friel was denied by a superb block on the line by a combination of Lagan defenders.

Keadue Youths kept up their excellent start to the season with this hard fought victory over Bonagee at Central Park.

It was a breezy evening which made playing conditions challenging.

It was a bright start by both sides and the first chance of the game came in the ninth minute when Aidan McHugh’s shot from long range was saved. Keadue had a good ten minute spell, in which Peter McGee’s excellent ball down the left side was flicked by Dylan Boyle but was hooked off the line. Mikey McFadden and again Dylan Boyle had further chances in the next few minutes but Bonagee’s keeper saved on both occasions. As the half went on Bonagee got a grip on things and were on top at midfield.

After the half hour, Peter McGee and Jack Doherty had a good passing movement which led to Dylan Boyle’s header well saved. Keadue ended the half on top with Orrin Burgess just wide on the run in the 40th minute.

At the start of the second half, the home side were again quick out of the blocks with Dylan Boyle again going close only to be denied by the keeper. Aidan McHugh had a speculative effort from long range tipped over just before the hour, but a few minutes later Orrin Burgess deservedly put Keadue ahead when he rounded the keeper and drove home from 20 yards.

Bonagee kept plugging away and in the last ten minutes got a fair bit of possession and forced a number of chances but they were both over the bar and the home keeper was not tested. #

All in all, a deserved win for Keadue against a well organised Bonagee outfit and it would not be a surprise if both ended up challenging for honours at the end of the season.
Best for Bonagee were Taylor Cassidy, Sergi Alcorn and Adam Murphy, while best for Keadue were Peadar Boyle, Peter McGee, Jack Doherty and Orrin Burgess.

Letetrkenny Rovers made it four wins from four as they ground out a narrow 1-0 win at Drumkeen,
Chances were at a premium in the opening half with Rovers twice coming close through Jonathan Coady while highly impressive Drumkeen midfielder Aidan Martin saw his header go just over in what was the hosts' best chance.

It looked like the half would end scoreless before crucially it was the visitors who took the lead on 42 minutes when Jack Dwyer did well to capitalise on a loose kickout but he had still work to do before squaring to Conor Friel who had the simple task of firing home from just a couple of yards out.

Rovers had chances to extend their lead when Leon Doherty blazed high over on the resumption after the break while he repeated the feat later in the half while home goalkeeper Aaron Foy was alert to deny Dwyer.

Drumkeen had the majority of possession in the last twenty minutes and threatened an equaliser without overly troubling visiting goalkeeper Aaaron Hepburn and the nearest they came was when Sean McVeigh headed just wide from fellow sub Gavin McDaid's well floated corner but a strong Rovers backline saw the game out well.

Jamie Lee Blaney  saw his Swilly Rovers make it 4 wins from 5 with a comfortable win at the Lakeside.

Swilly were 2-0 up at halftime through Michael Murray and a Steve McDaid free kick.
Erne had chances to get back into the game before Evan Hewitt helped himself to a second half hat-trick to continue his impressive goalscoring form as Swilly go joint top of the table with Letterkenny Rovers.

Milford Utd . . . 0
This game played at Carrickboyle saw the home team collect all 3 points thanks to a strong team performance throughout. With the aid of the breeze in the first half Gweedore played some good football and were awarded for their bright start on 16 minutes when Nathan O'Brien shot from 30 yards and beat the Milford keeper to put Gweedore one up.

Gweedore doubled their lead on the 25th minute after good work from Stephen “Doyle” McFadden and he squared the ball to Shaun Mc Fadden who finished well from 18 yards. Milford then had a goal disallowed following a corner, the Milford player was adjuged to have fouled Gweedore centre half Roan Turk in the process.

Gweedore got their third in the 40th minute following a corner which was cleared to Stephen “Doyle” McFadden who took it on his chest on the edge of the box and volleyed into the top corner to make it 3-0 at the break to the home side. Milford began the second half brighter and with the aid of the breeze began to press the home defence and Adam Curran began to see more of the ball and create chances for the away side.

Conor Coll, Damien Egan and Kyle McFadden all had chances to pull one back for Milford but Peadar O’Baoill in the Gweedore nets did well on each occasion. Gweedore got their fourth goal and finished the game as a contest on 70minutes when Steven “Donna” McFadden finished well when he was put through one on one.

An excellent team performance from Gweedore United to pick up their first 3 points of the season with Shaun Mc Fadden, Dylan Dwyer and Micheal Doherty outstanding throughout. Best for Milford was Damien Egan.