Donegal Minors prepare for meeting with Armagh in championship qualifier

Another chance for Donegal to progress in Ulster 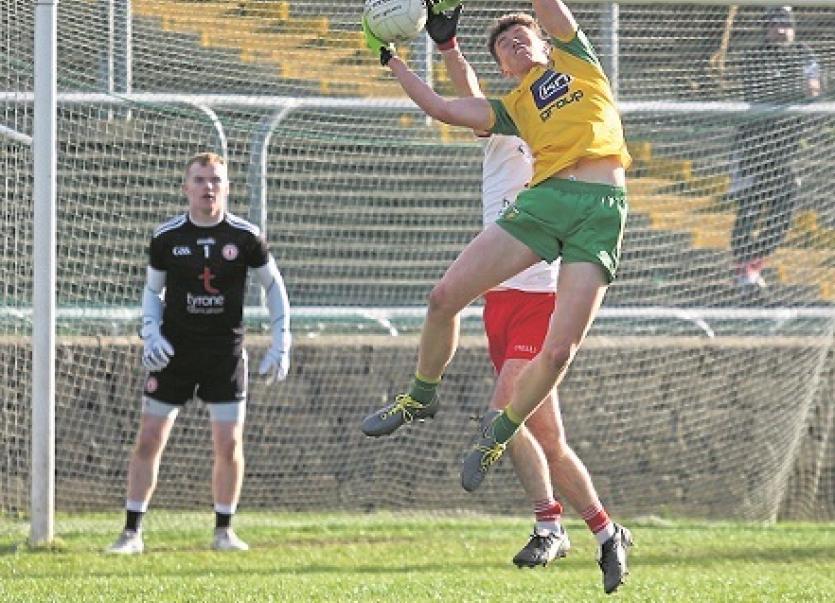 Donegal's Eoin Dowling rises for a high ball against Tyrone. Donegal will be hoping he can control the airways on Saturday against Armagh Picture: Thomas Gallagher

Donegal have a last crack at an Ulster Minor championship when they face Armagh in an Ulster Qualifier in Ballybofey on Saturday evening. (Throw-in 6pm)
Defeated by Tyrone in the first round, also in MacCumhaill Park, the Gary Duffy managed side will be hoping to build on the performance against the fancied Tyrone outfit, winners of the Ulster Minor Football League.
Armagh, managed by former Armagh senior Kieran McKeever, also lost their first round. They suffered a home defeat in the Athletic Grounds to the Paddy Campbell managed Derry. The Oak Leaf boys won that game 1-5 to 0-4.
For the Orchard County, Saturday evening’s showdown by the Finn is their third game. They defeated Antrim last Saturday evening in the Athletic Grounds, in a preliminary round Qualifier.
“Our biggest failing was that we failed to convert our chances and weren’t clinical enough up front. That is something we have been working on since the Tyrone game,” said Donegal assistant manager Sean Clerkin.
“There was a lot made before the Tyrone game about the Tyrone midfield pairing but Kealan Dunleavy and Eoin Dowling did well in the middle for us and it was up front that we fell a little short.”
Eoin De Burca, who was a regular in the half-back-line during the Ulster Minor League, missed the last game through injury. But the Gaoth Dobhair man has regained full fitness and is in the running for recall.
“We have a fully fit squad to select from so it is a matter of learning from the Tyrone game and getting ready for an Armagh challenge. They play with two sweepers and are extremely difficult to break down.
”We would feel that Armagh are not as good as Tyrone and if we can play as well as we can we feel we have a good chance of advancing to the next round.”