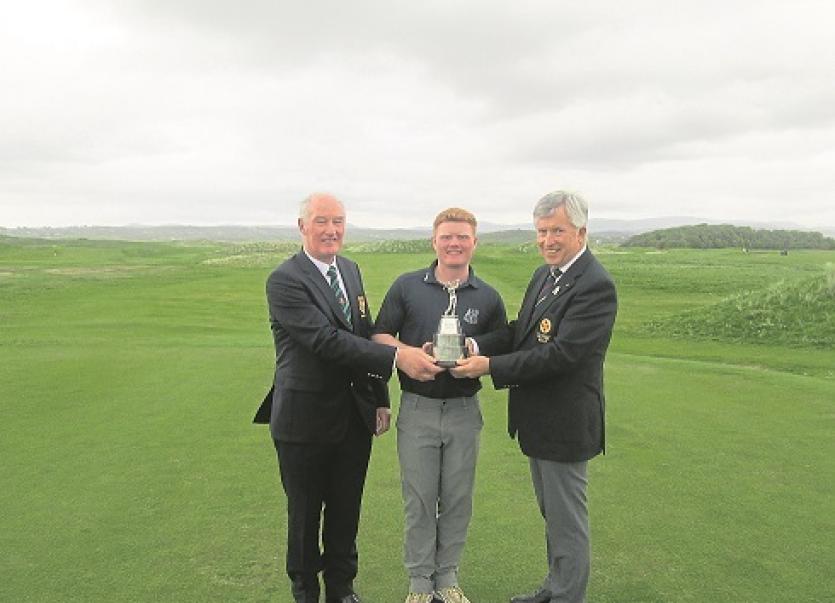 Last week Donegal Golf Club proudly hosted the Ulster Boys Amateur Open Championship. With some of Ireland and Europe’s top under 18 amateurs descending on the Murvagh Links, the weather played its part throughout the week, with day 1 ideal for some low scoring.
It did indeed prove to be the case with the early starters taking full advantage of the conditions, with Brandon St John of Portmarnock and Sam Murphy of Portumna taking the early clubhouse lead with impressive 2 under 71s. Their names stayed on top of the leader board until late in the evening when they were toppled by Joshua Hill of Galgorm Castle and then by Josh Mackin of Dundalk, both shooting fantastic 5 under par rounds of 68 to share the overnight lead. A special mention must go to Pádraig Ó’Dochartaigh of Gweedore who recorded a hole in 1 on the Par 3 3rd hole on day 1.
The early starters on day 2 got the better of the weather for the 2nd round with Hill & Mackin out amongst them trying to add to their impressive starts in the competition. Hill carded a solid level par 73 to keep himself ahead of the chasing pack with Mackin shooting a 1 over round of 74 to slip a shot behind.
St John would’ve felt slightly aggrieved to have been starting his 2nd round in tougher conditions to the 2 leaders, however, he didn’t let this put him off as he finished with an excellent 1 under round of 72 to close the gap and leave him 2 shots off the lead going into the final round on Friday on 3 under par. Murphy finished day 2 with a 1 over par 74 to slip behind the leaders and unfortunately fall back into the pack.
Day 3 saw the conditions become a lot tougher and gave the young men a real taste of what Links golf is all about with the morning starting out with rain and high winds. The final round got underway at 9am with a shotgun start with the leading group of Joshua Hill, Josh Makin and Brandon St John starting on the first tee.
The rain cleared as the morning progressed, but the winds remained, and many were not able to come to terms with the conditions and struggled as a result, with all of the top 3 dropping shots to bring the rest of the field back into contention. The turning point came at the 9th hole however when Josh Mackin of Dundalk finally came to grips with Links life and made a birdie, which was the beginning of a run of 3 birdies in 4 holes for the young man. This left Mackin 5 shots clear going onto the 13th tee and he was to make no mistakes over the last 6 holes, paring his way in to ensure his name would be etched into the Ulster Boys trophy, alongside the likes of Rory McIlroy and Graeme McDowell, as the 2019 Ulster Boys Amateur Open Championship Winner.
When presented with the trophy by John White, Chairman of the Ulster Branch of the Golfing Union of Ireland, Mackin made a speech that was wise beyond his years, telling us of how he had almost given up the game completely and had ‘gone off the rails’ only to have a moment of clarity and get himself back on track. This showed great maturity in a man so young and when asked after how it felt he simply answered “surreal”.
Well done Josh and we have no doubt that we will be seeing your name in the winners' enclosure for years to come.