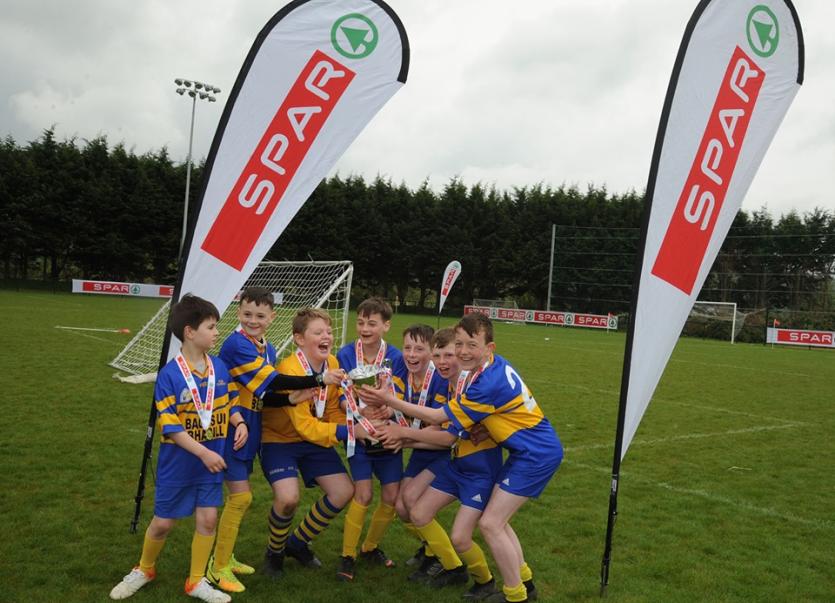 The Scoil Colmcille, Fintown    team celebrate their victory at Ballyare on Wednesday

Diamond Park, Ballyare was the venue for the Ulster Finals of the SPAR FAI Primary School 5s Programme on Wednesday.

37,448 students from 1,696 schools are contesting the SPAR 5s this year, 194 of which hail from Ulster. Through a series of local qualification rounds just 6 of the 24 schools progress from a hard-fought Ulster Finals day onto the National Finals. Scoil Mhuire, Caiseal who were among the winners at Ballyare on Wednesday

The ‘A’ Cup, open to boys and/or mixed teams from small schools, had four passionate schools with Scoil Colmcille, Fintown triumphant in what was a thrilling contest edging past Culdaff NS.

The ‘B’ Cup, for medium sized schools, again proved to be a compelling division with again 4 teams involved. The division was eventually won by St. Oran’s NS, Cockhill who topped the group on 9 points with Farnham NS in Cavan picking up a silver medal on six points.

The ‘C’ Cup, for large schools, was another hard-fought contest between 4 very talented schools. St. Joseph’s NS, Carrickmacross eventually came out on top of the large schools division with a gallant Scoil Iosagain, Buncrana in second place.

Scoil Colmcille, Fintown, St. Oran’s NS, Cockhill and St. Joseph’s NS, Carrickmacross will now progress to the National Finals on May 29 in the Aviva Stadium, Dublin. The rise in the number of girls putting boot to ball has been particularly pleasing for sponsors, SPAR, as 42% of participants are now female. Participation in the girl’s division of the SPAR FAI Primary Schools 5s programme reached an all-time high this year with 15,640 girls from 4th, 5th and 6th class registered making it more competitive than ever.

The Girls ‘A’, ‘B’ and ‘C’ Cup finals were held also held on the day, where there was a fantastic atmosphere throughout the competition.

In the Girls ‘A’ Cup, for small schools, 4 teams did battle in a really exciting and hard-fought division with a victorious Scoil Mhuire, Caiseal overcoming an excellent Latnamard NS of Monaghan as they collected a runners up medal.

In the Girls ‘B’ Cup Final, for medium sized schools, Glenswilly NS sealed qualification to the next stage after they overcame a tough challenge from Craigstown NS.

Glenswilly NS, winners of the Girls B cup

Scoil Íosagain, Buncrana put in a fine display against their competitors to win the Girls ‘C’ Cup division for large schools with the Inishowen school progressing to the National Finals. Runners up in that category were Gaelscoil Adhamhnain, Leitir Ceanainn.

The six Provincial Finalists will now travel to Dublin for the National Finals which will be held in the Aviva Stadium on Wednesday, May 29 (KO 11.30am). We would urge all participating schools to take the day off and travel to the Dublin finale to support their school in what should prove to be a phenomenal day for all involved, players and spectators alike. St. Oran’s NS, Cockhill  winners of the B Cup

It promises to be a fantastic fun filled family day with a “Player of the Tournament” accolade for each section, goodie bags and medals for ALL 192 participants as they’re all winners on the day!

Summary of our Ulster winners and runners up