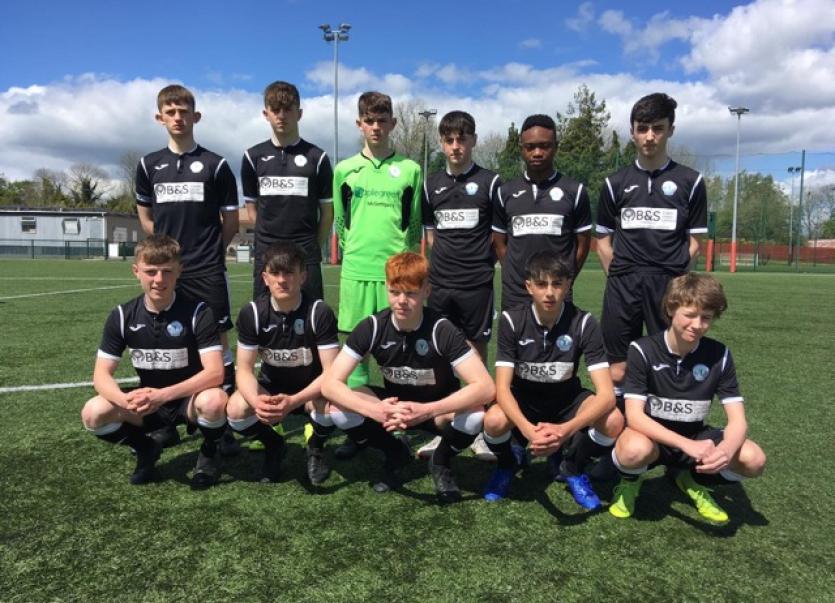 Finn Harps U15s got back to winning ways against a very strong Monaghan-Cavan FP side on Saturday in blistering conditions at Cootehill Harps FC Astro pitch.

Paul McBride’sside started very sluggishly and found themselves under pressure from the off. They were two goals behind after only 13 minutes.

Harps seemed to click into gear of conceding that second goal and applied the pressure on their hosts. Man of the match Oisin McKelvey was causing problems on the right side of midfield.

Harps got the first of their goals in the 21st minute when a typical Liam Donnelly run into the box caused the home rearguard problems. Donnelly was fouled and he got up to send the keeper the wrong way from the penalty.

The visitors were now starting to show their quality and levelled on the 28 minute mark. McKelvey and Mark Mbuli played a lovely one two combination. McKelvey then laid it off to Liam Donnelly who scored for a second time to make it 2-2.

McBride’s boys were beginning to dominate and soon went in front for the first time. Jamie Harris was fouled outside the box and Jamie McKinney stepped up to hit the free kick around the wall. The MUCFP keeper palmed the ball in the direction of Jamie Harris who made no mistake putting the loose ball into the net on the half-hour mark.

Harps were under pressure again towards the end of the half and Monaghan-Cavan equalised following a corner on 38 minutes.

Josh Maxwell was brought on as a half time sub for Aidan McCloskey and his energetic approach paid off. A ball into the box on the 41st minute was met by Maxwell who placed the ball past the keeper to make it 4-3 to Harps. The visitors then pressed for a fifth but efforts from Maxwell, Harris, Mbuli and Donnelly were well saved by the home keeper.

The home side looked to have been thrown a life line when they were awarded a penalty on the 68th minut. hey had the chance to level but the penalty taker put the ball well over the bar.

Harps put the game to bed in the 80th minute. Doherty played a 70 yard  ball to substitute Colin Mooney who took a sublime touch and played the ball to the impressive Oisin McKelvey who placed a cross into the box,. Josh Maxwell seemed to appear from nowhere to score low and hard past the keeper.

This result puts Harps in a commanding position at the summit of the league however the chasing teams have games in hand. Next up for the young Harps lads is Mayo next Saturday at home in Drumoghill with a 2pm kick-off.