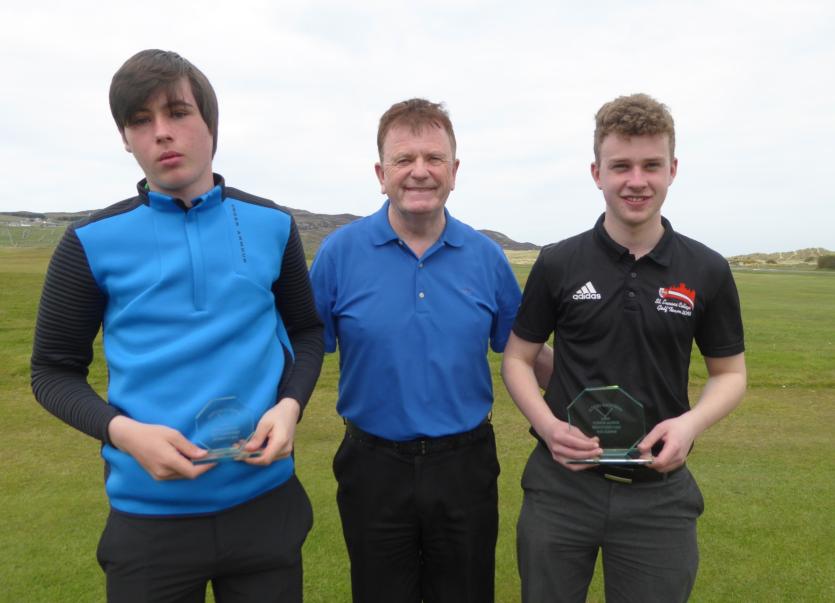 Played in glorious sunshine in Dunfanaghy Golf Club, the Derryveagh Crystal Donegal Schools Golf Final 2019 took place on Monday.
All the students really enjoyed their day on this great links course manicured to the best.
Pat Swaine of Derryveagh Crystal has been sponsoring the schools competition since 1993 and once again presented beautiful trophies to the students.
On the course it was the St. Eunan’s College boys who won the day over Pobailscoil Gaoth Dobhair in a dramatic finish. In the final two pairings birdies made the difference: one each by Ronan Daly (Captain St. Eunan’s College 39 pts.) and Christian Harris (37 pts.)
James Sweeney a 1st year student playing off 9 handicap had an excellent 36 pts. backed up by Adam Duncan, Ben Hopkins, James O’ Donnell and Ronan Coady. Pobailscoil Gaoth Dobhair got off to a great start with the score of the day from Cian Mc Bride (15) on 43 pts.( 9 pars and a birdie at the 11th). Padraig O’ Dochartaigh, Sean O’Dochartaigh, Jamie O’ Dochartaigh, Dylan O’Duibhear, Michael O’Dochartaigh and Donal Mc Bride all put in strong performances.
Edward Harvey (Donegal Schools Golf Association) also thanked Mr. Pat Swaine for his great support, all the Donegal golf Clubs and especially Dunfanaghy Golf that make it possible to hold the competition each year.
Last week in the Division 2 Final Rosses C.S. defeated Carndonagh CS in Cruit Island and the schools would also like to thank Cruit Island for staging the final.