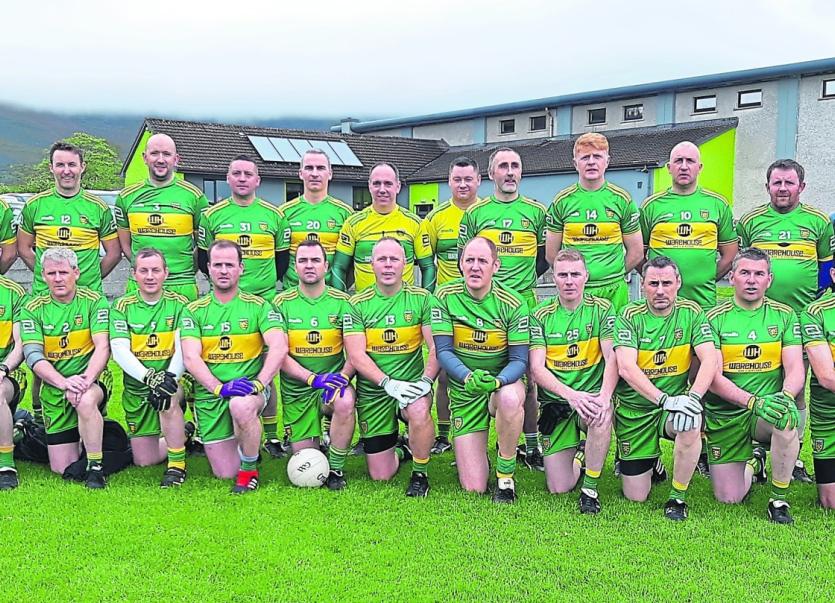 Donegal Masters pictured before their game against Sligo

Donegal Masters are back in action this weekend and hoping to make it two wins from two games when they face Down in MacCumhaill Park on Saturday. (Throw-in 2pm).
The Val Murray-managed Donegal side opened their All-Ireland campaign with a win over Sligo in Drumcliff.
Michael ‘Sticky’ Ward posted 0-7, newcomer Gary Gillen, Liam McGroarty, Sean Boyce, Kerry Ryan, Peter McHugh and Benny Cassidy hit 0-1 each in the 0-14 to 1-7 win over the Yeats County.
“It was good to get the win over what was a strong Sligo side that included former Sligo stars Eamon O’Hara, Paul Taylor and Sean Davey and it sets us up for Saturday’s game against Down,” said Val Murray.
“John Haran and Kerry Ryan dominated midfield once the got going and ‘Sticky’ Ward was red hot up front. But overall it was a good team performance the last day.”
“We don’t know a lot about Down. We beat them last year but it was their first year in the competition to be stronger this year. As far as I know they won their first game too.”
Donegal will be strengthened by the return of Donal Martin, Naomh Brid, Sean McDaid, Urris and Seimie ‘Cosha’ Friel, Gaeil Fhánada all who were unavailable for the Sligo game.
“With the return of the boys and we have no injuries we will be stronger this weekend than we were for the first game.”
Donegal were due to play Red Hughs reserve team in in Convoy last night in a challenge.
Donegal still have four games to come after Saturday against Antrim, Galway, Cavan and Tyrone.