BRIAN MCENIFF COLUMN: Patience and discipline will be needed to overcome Fermanagh 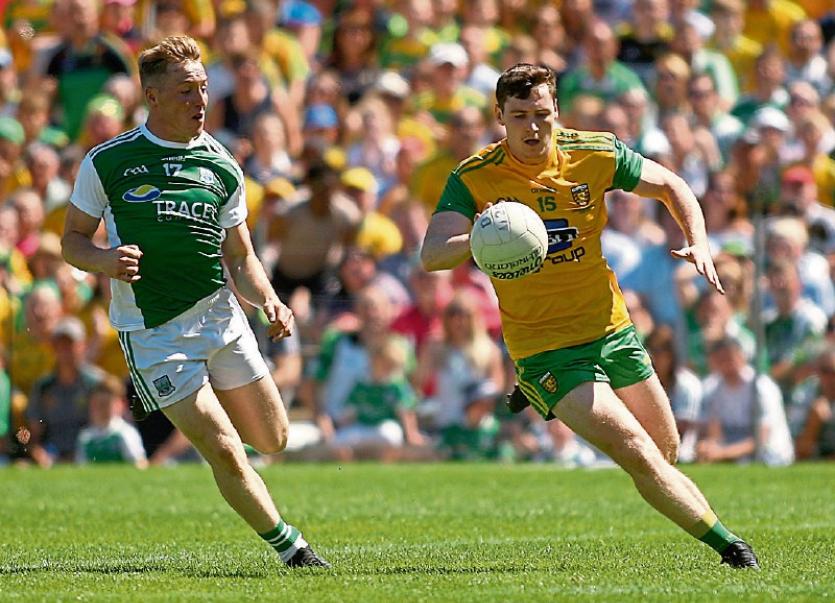 There is only one big topic this week and that is the meeting of Donegal and Fermanagh in Brewster Park on Sunday.

That certainly is the case here in Bundoran and Ballyshannon and right along the border. Belleek and Garrison are in our hinterland and for us in this part of the county it is a real local derby clash.

I never enjoy Donegal, Fermanagh games until they are over or at least it is looking like Donegal are going to win. But in saying that, too, up here we would support Fermanagh if they were playing any other country and I would regularly attend Fermanag games in Enniskillen.

If it was a case Donegal had no game or were playing down in Cork or Kerry and Fermanagh were at home I would nip into Enniskillen.

It is a quarter-final tie with the prize for the winners most likely a semi-final meeting with Tyrone.

Tyrone still have to play Antrim, and I mean no disrespect to the Saffrons and I don’t think any of my Antrim friends will take great offence if I say it will be a huge surprise if Tyrone don’t emerge from that game.

But enough talk about the semi-final. In fact it is chat of the semi-final among Donegal supporters that worries me ahead of Sunday’s showdown.

Any Donegal supporter that thinks for one minute this game is going to be a walk in the park and an easy passage for Donegal are in for a rude awakening on Sunday.

This is going to be a tough hard slog and nothing less than a total performance will see Donegal through.

Fermanagh are a good side. They played in Division Two of the league as we are well aware. They beat us in O’Donnell Park and they came close to winning promotion and joining us in Division One next season. Rory Gallagher is meticulous in his preparation as we know well and they will be well prepared. I know for a fact they are putting in a huge effort and pinning a lot on this game.

My contacts in Fermanagh have been telling me they have put in a huge effort into the game. They had a four day training session in Enniskillen with the players overnighting in one of the hotels in Enniskillen for a number of nights and they also had a weekend camp out of the county.

They have left no stone unturned and of course the game is in Brewster Park, which they count as something of a fortress.

We also know the way they are going to play. It is no great secret they pack the defence and hope to hit teams on the break and the game on Sunday will be no different.

The also have a number of key individual players. Eoin Donnelly and Ryan Jones are a good midfield pairing. Che Cullen is a fine full-back and a good man to man marker and they have Seamus Quigley up front in the full-forward line.

Seamus’s brother Sean, Fermanagh’s top forward in recent years, hasn’t been part of the panel since the start of the year.

He is an enigmatic character and a quality forward. I’m not sure what happened and though there has been no reports of him being back in the squad, I haven’t heard anything to suggest he is back but I would not rule him out of making a dramatic return on Sunday. Stranger things have happened.

They are without Tomás Corrigan who is a good scoring forward and a big loss. Fermanagh’s real strength is their system of play and work rate. It is very much a case with Fermanagh the sum of all the parts as opposed to any outstanding individuals.

It is going to take a big performance from Donegal. But by all accounts Donegal have no great injury problems. Caolan McGonagle and Oisin Gallen have been receiving treatment but otherwise Declan (Bonner) had a fully fit squad.

The big dilemma for Declan and his management team is team selection. A number of younger players put their hands up in the league and put themselves in the frame for places in the team.

The dilemma for management is do they go with the tried and trusted older players or give youth its head and start a number of the young lads. Sunday may be a day to start with experience and possibly introduce the younger lads when the game opens up.

Fermanagh may pose a huge challenge but this is a game Donegal can win and I expect to win after a huge struggle.

In Michael Murphy, Patrick McBrearty and Jamie Brennan, Donegal have one of the best full-forward lines in the game. If they receive a decent supply they have the potential to do the business.

I know I have advocated a patient approach from Donegal. But I do think they should also take the game to Fermanagh from the first whistle and put them on the back foot from the off. But the most important thing of all Donegal are going have to be disciplined.

Finally congratulations to Gary Duffy and the minors on their win over Cavan on Sunday evening in Cavan. This was a good win and they are now looking forward to an Ulster semi-final meeting with Monaghan.

Commiserations to Mickey McCann and the Donegal hurlers on their defeat by Derry in the Christy Ring Cup. It was a heartbreaking result. They lost by three points having led right up to the closing minutes. But overall it was a great performance against a team that hammered them in the league.