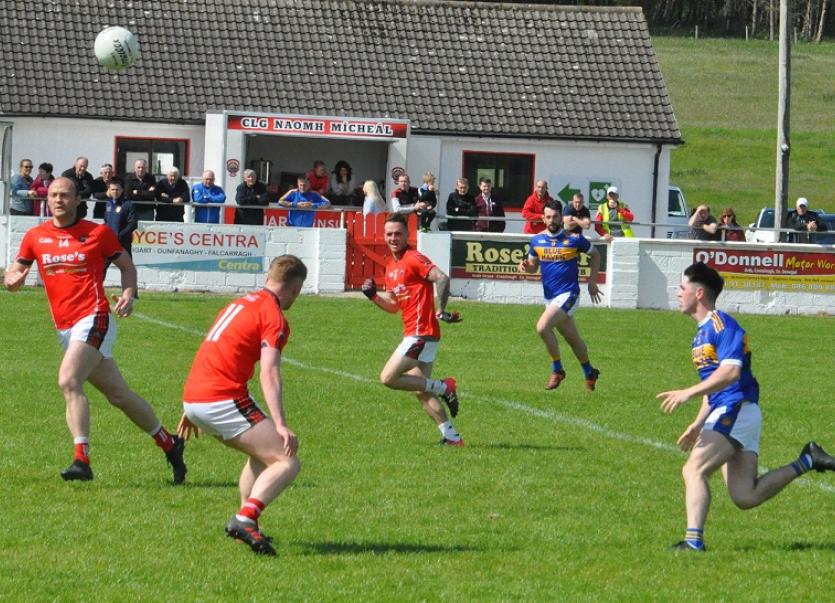 Kilcar were the victors in this game played at the Bridge on Sunday. Kilcar were playing their fifth match in nine days, but they took an early lead that they never relinquished.

The match also saw Christy Toye coming on as a second half substitute for his first appearance of the season.
Playing with the breeze in the first half Kilcar raced into a four point lead with four points from Mark McHugh before St. Michael’s opened their account with a point from Colm McFadden.
Kyle McGarvey added another point for St. Michael’s and Mark Sweeney added one for the visitors before Andrew Kelly struck for a goal for the Bridge men to leave the minimum between the sides.
However further points from Michael Hegarty, Oran Doogan and McHugh increased the Kilcar lead again before a fine point from Edward O’Reilly for the hosts ensured that the half-time score was St. Michael’s 1-3, Kilcar 0-9.
St. Michael’s were playing with the wind in the second half and began strongly with points from Andrew Kelly and Colm McFadden reducing the deficit before Colm McFadden added another to draw St. Michael’s level.
However, Kilcar extended their lead to three points again with scores from Mark McHugh and Aodhan McGinley and although St. Michael’s added further points from Kelly, Colm McFadden and Michael The Rock Gallagher it was Kilcar who held on for the victory by the narrowest of margins to maintain their lead at the top of the table.