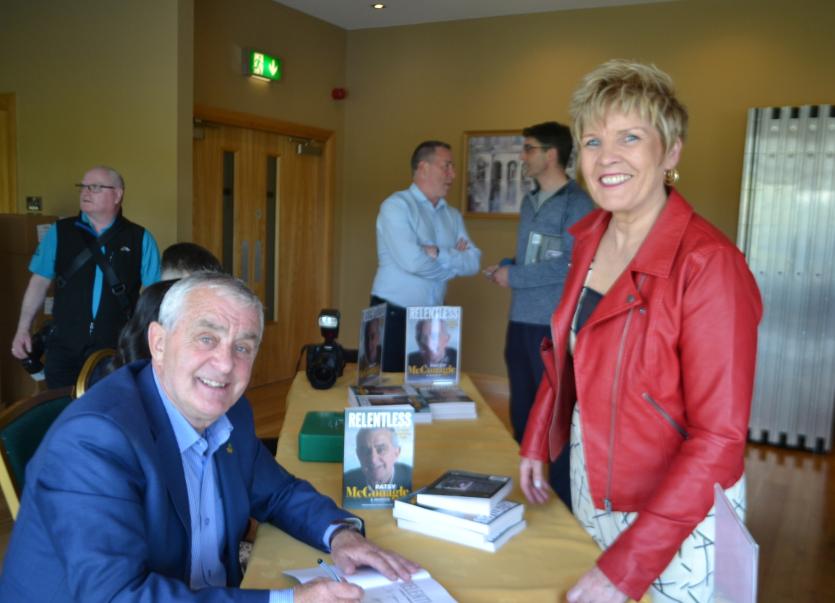 World champion race walker Robbie Heffernan, up from Cork for the launch, was the special guest.

Among the other guests were Ossie Killkenny, formerly of Sports Ireland and the BLE,  Liam Hayes, the Meath All-Ireland winning footballer from Hero Publishing, publishers of Relentless.

Rob Heffernan recalled first meeting Patsy as far back as 1999 at the European U-23 championships and has been working with him directly since the Sydney Olympics in 2000.

“Patsy has watched me grow and has watched me change and I have watched the way he has managed me at different stages in my career and how he has adapted to me.

The respect has grown on both sides,” said Rob Heffernan.

“Patsy is a passionate sportsman and he was brilliant for me to have at championships because he knew me and I knew him.”

Patsy said he was deeply moved  by the large turnout for the launch and also paid tribute to his wife Rosaleen and his family that stayed the pace with him and jumped every hurdle down the years.

He also paid tribute to all his fellow members of the Finn Valley members and people and sports people from other sports he had worked with down the years. He also thanked journalist and writer of Relentless,  Chris McNulty for his patience and dedication to the writing of his memoir.

Relentless is available in all local bookshops and is also available from Amazon and on Kindle.

Relentless covers all of Patsy’s years in sport from his early years with Cranford Athletic Club, Finn Valley and managing and coaching teams at international level and his coaching and managing roles with GAA clubs Glenfin and Sean MacCumhaills and his stint coaching and training Donegal senior footballers.