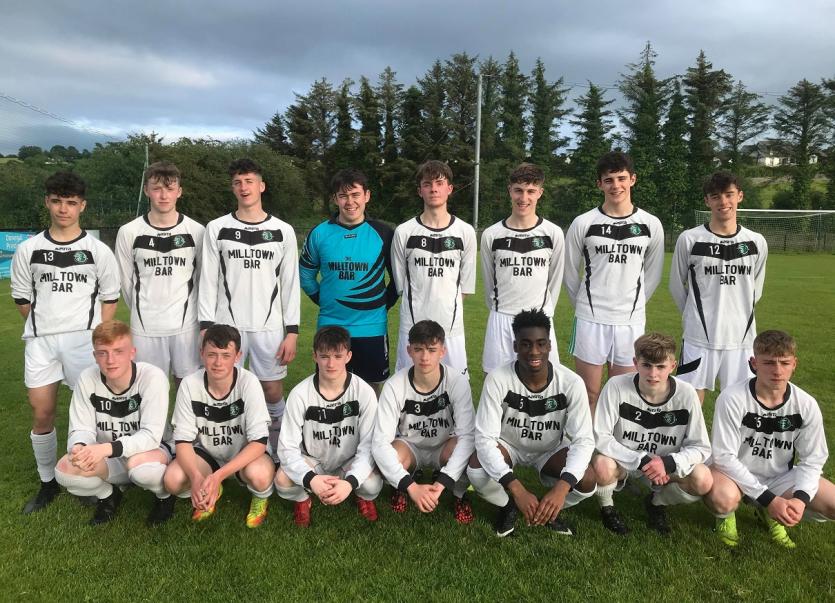 Keadue Rovers Youths 4
Fanad Utd Youths 0.
Keadue moved into the quarter finals of the Gorey Curran Cup with a good home win over Fanad at Central Park.
On a good evening for football Keadue were mainly on top in the opening exchanges and the first chance was a fine long range effort just wide from Aidan McHugh.
They started to dominate around 20 minutes with the front pairing of Dylan Boyle and Orrin Burgess combining well. Mikey McFadden hit a free kick wide on twenty six but a minute later Sean Kerr had a good chance for Fanad when a loose ball fell to him but he knocked it over.
On the half hour Keadue went ahead when Aidan McHugh after an excellent run was brought down and he converted the penalty.
Fanad came right back into it enjoying a fine end to the half, creating numerous chances, Sean Kerr with a couple of great chances, firstly hitting the crossbar, then missing an almost open goal after a defensive mix up for Keadue.
Keadue took full advantage and from a breakaway which led to a corner Aidan McHugh was on hand to tap in for their second.
At the start of the second half Keadue were bright with Mikey McFadden just wide and Dylan Boyle making plenty of runs.
Fanad began to shade possession after the hour but a couple of home subs began to make a difference. Keadue got more territory as a result and on 75 minutes the game was made safe when a fine run by Orrin Burgess led to him hammering home low to the net.
On 77 minutes, following a fine move Aidan Proctor completed the scoring with a left foot strike from the edge of the box. More subs made their way on for Keadue and they could've added more but in the end it was a 4-0 scoreline which was a little harsh on the visitors.
A good team performance from Fanad while Peadar Boyle, Dylan Boyle, Aidan McHugh & Mikey McFadden excelled for Keadue.
Referee: Seimi Ferry.

Letterkenny Rovers 6
Eany Celtic 1
Letterkenny Rovers continued their winning run with a comfortable 6-1 victory over Eany Celtic in their John ‘Gorey’ Curran Cup quarter-final tie at Leckview Park on Monday evening.
All six goals came from different goal scorers with three in the first half followed by another three in the second half as Anthony Gorman’s charges proved too strong for their visitors who battled gamely.
This was the first fixture back for both clubs following the exam break and they will meet again next week in a preliminary round tie for the Colin Breslin Memorial Cup when Eany will be hoping to make home advantage count.
Rovers were quick off the mark leading 2-0 after the opening quarter of an hour. After a mazy run inside the penalty area, Conor Friel saw his effort crash off the post on 11 minutes but Nathan Plumb was well positioned to steer home the rebound past the hapless Eany goalkeeper Corry Byrne.
Plumb then turned provider as he set-up James Kernan who doubled their lead shortly after.
The hosts were dominated and added a third shortly after the half hour mark when Joel Gorman curled a brilliant free-kick into the top corner of the net.
Eany did respond and Nathan Maxwell forced Johnny Pearson in a finger-tip save when he struck a speculative effort from long range.
On the stroke of half-time, Rovers’ influential winger Jack Dwyer saw his header cleared off the line by Jordan Jeruis.
After the interval, Gorman was unlucky with another well hit free-kick this time superbly saved by Byrne but on 55 minutes it was 4-0 when Dwyer cut in field and his deflected shot looped into the net.
Thomas Keys added a fifth goal with a powerful header from Gorman’s corner and although Jeruis pulled one back for the visitors from the penalty spot, the rout was completed fifteen minutes from time when Jonathan Coady unleashed a piledriver into the net from 25 yards.

Drumkeen 2
Swilly Rovers 0
Drumkeen advanced to a quarter final clash with Lagan Harps after a deserved 2-0 win over Swilly Rovers.
Drumkeen took the lead on 20 minutes through a sweet strike to the bottom corner from Gavin McDaid and doubled their lead on 56 minutes with a wicked dipping effort from the impressive Oran Paterson.
Both sides meet again next week in the Colin Breslin Cup.