Donegal jockey had another five wins last weekend in Laois

The Letterkenny youngster has ridden 30 winners so far this year 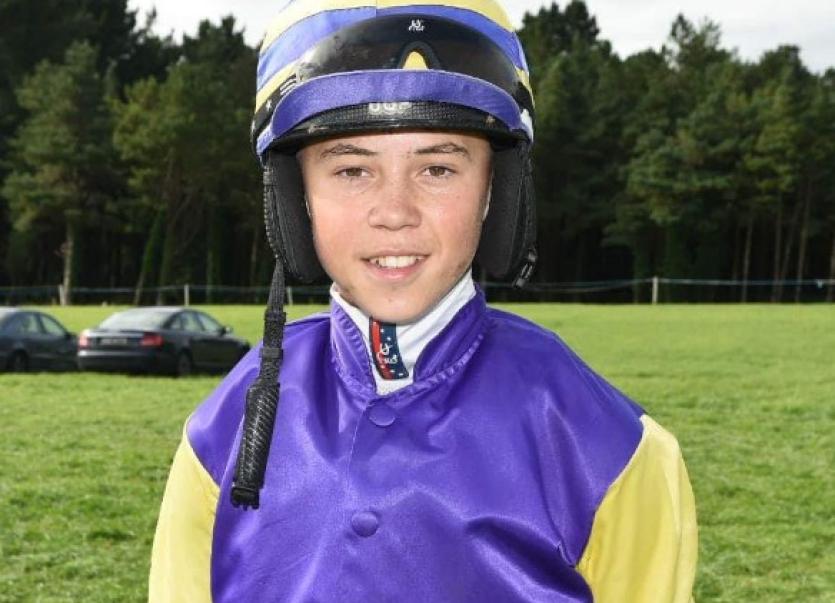 Dylan Browne McMonagle made the long trip to Shanahoe in Co Laois on Sunday last and the Letterkenny jockey continued in his rich vein of form with another five timer bringing his total to 30 wins for the season.
Dylan got off the mark in the 143cm in a close race on Unhinged. He quickly doubled up on the locally trained Waratah and this time he had a much easier victory in the 148cm pony race.
Browne Mc Monagle then trebled up when Four Stone Of Lead ran his rivals ragged in the 153cm and his fourtimer was completed as Bypolar Blondie made it three straight wins in the ten furlong open.
Derry’s Pride made it another fine afternoon for the talented 16 year old bringing his total wins to five but he had to be his very strongest to get a renewed effort inside the final furlong for a narrow victory in the one mile non winners.
Sam Ewing is another top jockey going the right way as he scored a fine treble firstly guiding the consistent Omega over the line in the one mile open. His second success came aboard the fine strapping Mr James in the 12 furlong open.
Ciderman gave the Co Antrim maestro his treble in the feature race of the day the two mile open as he raced to a facile win and put him self clearly in the Dingle Derby picture come August time.
Rory Mulligan continues to impress as he steered Where It Began to an all the way win in the 128cm and Danny Gilligan had mixed fortunes as he took the 138cm aboard Little Mainne and later took a tumble and was stood down for the rest of the afternoon.
Connor Walsh who hails from Co Wexford gave Call The FBI an enterprising ride to win the second division of the ten furlong open and is another rider going the right direction.
The racing fraternity would like to wish Danny Gilligan and Ben Mulligan speedy recoveries after three respective tumbles on Sunday.
Racing continues this Saturday, July 6 at Carrickadawson with a 2pm start. Nine-race card on the day. Bookmakers and refreshments on course.