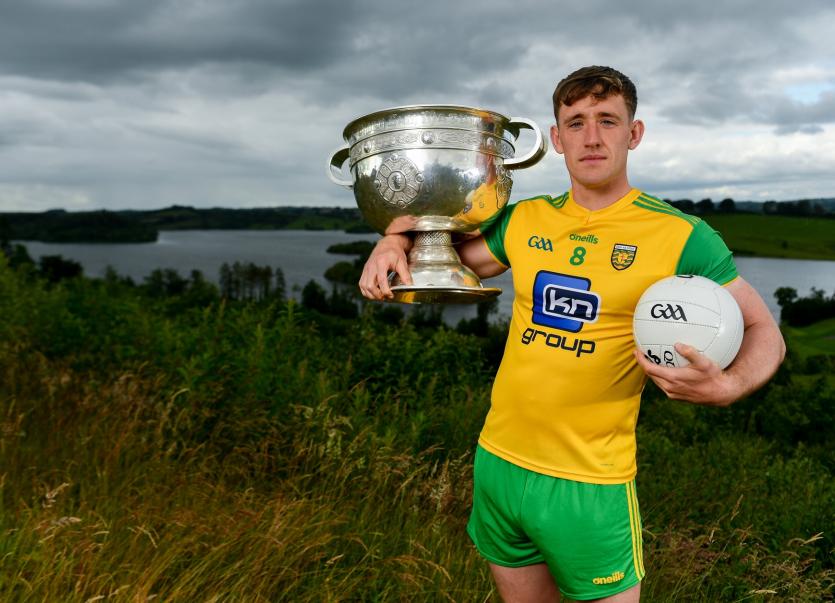 With Donegal playing at a level where they are reaching dizzy heights in this year’s championship, one former county player feels the time has come for the team to take its place at the GAA’s high altar.
Damian Diver believes Donegal are playing at a standard no team from the county has ever reached before. The Ardara man also admits to being really excited about Donegal’s prospects in the Super 8s and the All-Ireland series.
“They are really playing some fantastic football,” Diver said.
“I don’t think in all my time playing for and watching Donegal, I have ever seen a Donegal team play so well.
“They look like a team that are totally in tune and everyone knows their role. They are a very well prepared and professional outfit. I’m really excited and looking forward to seeing them in the Super 8s.” The Ardara clubman said the performances against Tyrone and Cavan in the Ulster Championship were awesome.
“There is no other way to describe them,” he said.
“Both games were over after ten minutes.The only mystery at the end was how Tyrone and Cavan were so close to them.
“Donegal came out against Tyrone and literally blew them away in the first ten minutes, and it was a similar story against Cavan.
“My fear before the final was after the ease with which Donegal got through against Tyrone, they would have become a little complacent. But nothing could be further than they case. They came out and just blitzed Cavan who like Tyrone, didn’t know what hit them.
“They may have eased off the gas a little in the second half in both games but I was never worried and I was never thinking, if we don’t watch ourselves here we will get caught.

SEE ALSO: McBrearty gets set to join the 100 club

“They played the football when they had to and then eased off and cruised to comfortable wins.”
Diver, who featured in a number of provincial finals for Donegal, reckons Declan Bonner’s side are now one of the leading challengers for the All-Ireland.
“The football they are playing is a great credit to Declan Bonner and his coaches Karl Lacey, Stephen Rochford and Gary Boyle,” he said.
“They have really moved on from last year and have gone on to a new level.
“They have power and pace and they have great height in the team out around the middle third.
“They young lads like Jason McGee, Michael Langan and Stephen McMenamin have really made the step up and bring a great freshness to the team. Shaun Patton has been brilliant in goals and his kickouts are right up there in the Stephen Cluxton league.
“They are a tight defensive unit and Eoghan Bán Gallagher and Ryan McHugh give them serious attacking pace from the half-backline.” Diver also singled out Hugh McFadden for special praise.
“He’s having a very good championship and is playing the sweeping role very well,” he said.
“He is a smart player and a good leader on the field and it is easy to see why he has been chosen as vice-captain.
“Hugh is a great team player and he has come on leaps and bounds this season and is having a very good championship.”
Diver added: “I suppose Donegal’s real strength is the fire-power up front. Jamie Brennan is having a brilliant championship and scored some very important goals and he is the type of player that will really relish the wide open spaces of Croke Park.
“Patrick McBrearty is only getting back to himself which is understandable given his long lay off.
“But he will get better with every game and we will hopefully see a lot more from Patrick before the season is out.

Brilliant
“Michael Murphy has been brilliant and is an unbelievable leader and he really makes the team tick. He’s practically unmarkable and is a huge influence both on and off the ball.”
In the Super 8s, Donegal are in the same group as Munster champions Kerry and the two teams that emerge from this weekend’s round four All-Ireland Qualifier meetings of Meath against Clare and Galway v Mayo.
Donegal are home to Meath/Clare in their first game on Sunday week. They then play Kerry in Croke Park on Sunday, July 21 in their second game and will complete their group games with an away tie to either Galway or Mayo on the August bank holiday weekend.
“I expect Meath to beat Clare and thought they ran us close twice in the league,” Diver added.
“I feel we have moved up a number of gears since those games and will be too strong for Meath.
“Kerry in Croke Park are always a tough proposition and they have a lot of very talented young lads. This is the game we need to win because I wouldn’t like to have to go to Castlebar for the last game looking for a win.
“I would prefer to see Galway coming through against Mayo, but I don’t think they will and we will be heading to Castlebar for the last game.
“Hopefully, we will have the two wins and qualified for the semi-final by that stage by the time we face the last game.
“I know Mayo have picked up a lot of injuries, but I still think they will have a big say in the championship. I think we can beat Kerry because we have a bit more experience, but it won’t be easy.
“Remember once you are in the All-Ireland semi-final you are only 70 minutes or so from an All-Ireland final.”