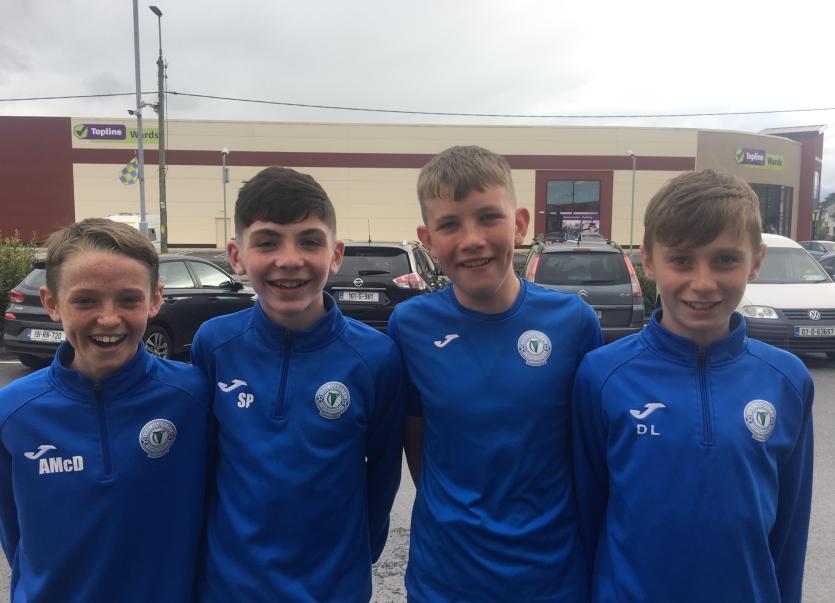 Finn Harps recorded their second win in as many games in the U13 National League Phase 2 beating a good Athlone Town side 5-1 at Lissywoolen.
A brace from captain Shaun Patton, along with strikes from Adam McDaid, Deizel Long and Tiernan McGinty sealed a comprehensive victory for Kevin McHugh’s side. The Harps U13s can now look forward with some confidence to next Friday night’s north west derby against Sligo Rovers at Finn Park (kick-off 7.30).
Harps started fast and opened the scoring in the first minute when Patton burst into the box before cutting the ball back across to McDaid whose first time strike flashed high into the net out of the reach of the Athlone keeper.
Midway through the half Patton added a second and it was 3-0 when Deizel Long scored from a Martin Coyle corner.
Harps began the second half like they finished the first and grabbed their fourth goal almost immediately when good work from McGinty released Patton, one on one with the keeper and just like the first he calmly finished past the keeper.
Athlone were unfortunate not to pull a goal back within a minute when a shot ricocheted off the post and back into Killian Hagan’s hands. McGinty finally found the net for himself after assisting two earlier goals. A ball down the line from Darragh Coyle picked out McGinty and the midfielder held off a challenge before rifling a powerful shot in from all of 25 yards.
Athlone got a consolation goal with 20 minutes remaining when they converted a penalty.

Other games
Two Finn Harps underage teams were in Dublin on Saturday with the U19s winning 4-1 against Shelbourne at the AUL Complex thanks to goals from Darragh Ellison, Gabby Aduaka, Niall McGinley and Ronan Gallagher.
However, it was a 4-1 defeat for the Harps U17s against Shels. Harps took the lead courtesy of a cracking Conor Black free-kick.
Two late goals saw the Finn Harps U15s lose 4-2 to St Patrick’s Athletic at the Curragh in Killygordon on Saturday.
Paul McBride’s boys had led 2-1 at half-time thanks to goals from Conor Campbell on nine minutes and Luke McGlynn just before the half-hour mark.
Campbell and McGlynn have both represented the Republic of Ireland at underage level. Despite the defeat manager McBride was happy with the performance of his team.