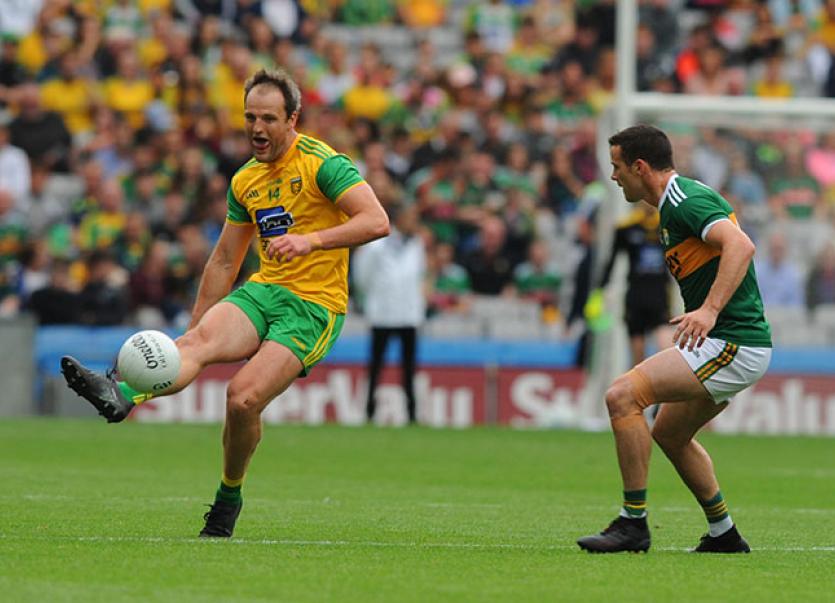 Donegal had to come behind on numerous occasions but showed great spirit to get a draw in a game for the ages in Croke Park against Kerry.

It was a contest that didn't deserve a loser and is one that will live long in the memory. Michael Murphy and Ryan McHugh were again outstanding and Donegal had to show great heart, especially as they were hit with so many injuries.
They started without the unfortunate Eoghan Ban Gallagher but also lost Neil McGee and Patrick McGrath to injury and during the game Jason McGee and Hugh McFadden limped out.
But they still never gave up and got their reward in the end in front of an attendance of 48,723.
It was a very even opening half with the sides level five times before Kerry had an injury time free from Sean O'Shea to lead 0-10 to 0-9.
Jason McGee had the opening point but Stephen O'Brien levelled almost immediately. That was the pattern with Michael Murphy and Killian Spillane trading scores followed by Niall O'Donnell and Paul Geaney.
But there were goal chances too. Eoin McHugh was through but his pass was intercepted while Shaun Patton made a great stop from David Clifford for a '45' after he was found in space by Sean O'Shea.
David Clifford and Sean O'Shea pointed frees after harsh fouls against McMenamin and Ryan McHugh, but Donegal replied with Jason McGee and Michael Murphy combining to set up Ryan McHugh.
Stephen O'Brien pushed Kerry two clear but Ryan McHugh again and Michael Murphy with his left had the sides level on 24 minutes.
Ryan McHugh did great defensive work to force Sean O'Shea to point with the goal at his mercy a minute later. An exquisite pass from Michael Murphy set up Patrick McBrearty to get off the mark after he had been frustrated a couple of times.
Paul Geaney and Sean O'Shea (free) pushed Kerry two ahead again while Hugh McFadden should have pointed for Donegal. But they came again with Eoin McHugh drawing a foul for Patrick McBrearty to point and the Kilcar man levelled matters with two minutes of normal time left.
Kerry lost Gavin White to a black card for pulling Ryan McHugh to the ground, but then Donegal butchered a great goal chance and at the end of it Niall O'Donnell also saw black for a trip, which on viewing afterwards looked very harsh.
In the final attack Paul Geaney won a free for O'Shea to finish the first half scoring.
Half-time: Donegal 0-9, Kerry 0-10
Michael Langan had Donegal level within 45 seconds but David Clifford replied 30 seconds later. But Michael Murphy hit a free from 50m to leave it 0-11 each on 38 minutes.
He repeated the act when Eoin McHugh was fouled, almost from the same spot on 42 minutes to put Donegal ahead.
However, there was disaster for Donegal when a mix-up in defence between Ciaran Thompson and Caolan Ward in the now slippery conditions let Paul Geaney through and he fired past Shaun Patton.
Oisin Gallen got a good Donegal point but it was cancelled by Tom O'Sullivan but Gallen then won a free for McBrearty to leave just a point in it.
Killian Spillane had his second point of the game but Donegal then won a penalty. Oisin Gallen won the ball, found Ryan McHugh and he found Dáire Ó Baoill who was fouled. Michael Murphy thundered home with some style from the spot.
They should have had a second goal immediately as Ryan McHugh won the kick-out and Oisin Gallen, Jamie Brennan and Frank McGlynn were involved but Eoin McHugh was penalised for throwing the ball into the net.
Sean O'Shea had a Kerry point but Shaun Patton found Ryan McHugh and he took on his man to find Michael Murphy flying through the middle to point and leave it 1-15 to 1-13 with 60 minutes on the clock.
Killian Spillane cut the lead but Jamie Brennan did well to win a free and McBrearty pointed but Stephen O'Brien had it level with six minutes left.
David Clifford edged Kerry ahead but Michael Langan cancelled that score. Tom O'Sullivan drifted forward to fist Kerry ahead and Jamie Brennan missed a great opportunity to level after a good pass from Paul Brennan. But Oisin Gallen levelled and then Ryan McHugh won the kick-out and found Michael Murphy to push Donegal ahead.
It was hectic as Kerry came forward and Paul Geaney levelled again on 72 minutes.
And with almost four minutes of added time played Paul Murphy edged Kerry ahead again.
Tomas O Se, just on the field, was shown a red card. And Donegal worked the ball forward for Jamie Brennan to win a free on 75 minutes. Michael Murphy stepped up to end a cracking contest and leave it all square.