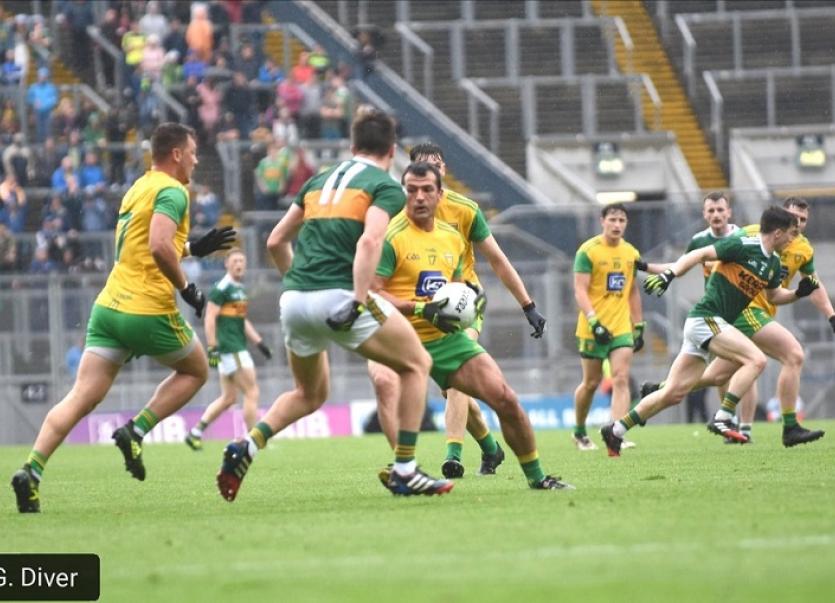 Frank McGlynn on the ball for Donegal against Kerry Picture: Geraldine Diver

Even though he did not say it, you could just sense that Monaghan ace marksman Conor McManus would really have relished this wonderful shoot-out between two top class sides.
He certainly would have relished all those man to man battles all over the pitch and quality diagonal balls that came from Kerry especially, a sharpshooter's dream.
This was as far away from a blanket defence bore as you could get as Donegal and Kerry went for broke.
“It was a serious shootout.
“Both teams would have been coming to Croke Park with the ambitions of scoring 1-16 to 1-17 because that is what it is going to take ultimately to progress down the line.
“They will probably both be happy with that and 1-20 on the board each means they will hope to trim the concession rate on the other end, but hey this was a really great game.
“Both teams responded very well to any set-backs they got, and it was a great game to watch”.
So would he have liked to have been out there in such a game?
“Yes, there was a lot of man to man stuff, yes at times the game was quite defensive, but generally both teams really went for it which made it such a special game.
“Generally, it was great to watch”.
When asked if Kerry left it behind them as they had four great goal chances and were winning by a point with less than a minute to go?
“Maybe but Donegal had chances too and did not take them, but the general efficiency of both teams was very impressive.
“Definitely one of those two teams, if not both of them, will have a big say in the All-Ireland series”.
So can either of these lay a glove on the Dubs?
“Yes well both of them will be very happy that they scored 1-20 each and that is what it will take to beat Dublin in Croke Park and that is what both teams will be concentrating on.
“If they can come here and keep the Dubs' scoring rate down and tag on similar scores then they would have a really good chance”.
So, who was he impressed with on the Donegal team.?
“It was very hard to separate Michael Murphy and Ryan McHugh as both were equally impressive and are great leaders.
“On the other side, Paul Geaney and Stephen O’Brien were very good too so there were a lot of top class displays”.