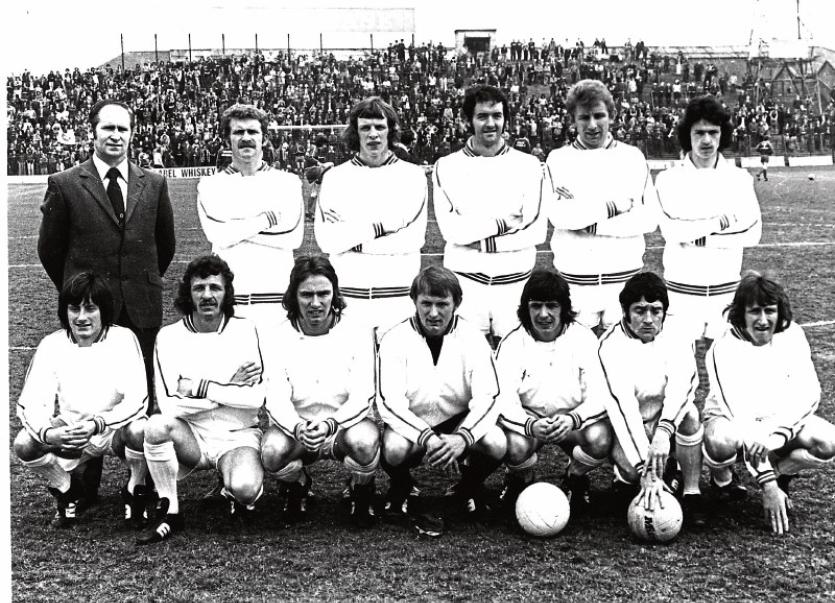 I find it difficult to believe that half a century has rolled by since Finn Harps persuaded the football authorities in Dublin that Donegal was entitled to League of Ireland football.

The off-the-field campaign to win over the FAI rumbled on for nearly a year. What an achievement it was given the club’s humble and undistinguished background.

In terms of Donegal junior soccer, Finn Harps hadn’t, in the years prior to their bid for senior status, been a particularly successful club. Better-known soccer outposts in the county shared that honour: Swilly Rovers, based in Ramelton, Killybegs, Rathmullan, Letterkenny, Lifford and the Inishowen towns of Buncrana, Moville and Carndonagh, all had, at one time or another more impressive credentials.

Harps simply stole a march on the other teams in the county with a meteoric rise from nondescript juniors, with no apparent foreseeable potential, to a place alongside the great names of Irish senior soccer.

It’s an extraordinary story but then in sport there are deeds that sometimes defy gravity. What a dash up football’s pecking order Harps made: from summer tournament nobodies to a place in the UEFA Cup – in four years.

How did all this get under way? I have to declare an interest here, for I was one of those who was excited by the dream of bringing senior soccer to my native county. And I still remember vividly the dogged fight to get into the League of Ireland.

Patsy McGowan and I had struck up a firm friendship; we were both in the transport industry. In those days I was on the clerical staff of the Lough Swilly Transport Company in Letterkenny, they’re now defunct, long gone, and Patsy drove a CIE lorry, hauling containers of freight daily from the rail-head at Derry to Letterkenny.

Our burning ambition was to be the first Donegal club to play senior soccer. At first glance, it seemed a far-fetched idea. The club’s status hardly suggested League of Ireland material. Initially, there was literally nothing at Finn Park – only a summer cup team. No facilities existed there at all. A set of goalposts was Harps’ only possession.

But they did have people who were enthralled by the idea of creating a senior soccer club in the Republic of Ireland’s northwest outpost. Patsy McGowan and Fran Fields were the front runners, driving the project.

Patsy, an ambitious, determined figure, was a former goalkeeper whose only experience of the League of Ireland was a few games for Sligo Rovers. Fran was a forceful businessman who seldom took no for an answer. Remarkably, his Harps involvement would lead to the presidency of the Football Association of Ireland and when the Republic of Ireland’s football team reached the dizzy heights of a World Cup quarter-final in 1990 in Italy, Fran led the Irish delegation. All that of course came about because little, unpretentious Finn Harps had made it all the way to the top table.

I often in those days got a lift home from work in Letterkenny with Patsy on that CIE lorry to my home in Killea and later to Derry when my mother moved house after my father’s death. On these trips the need for senior soccer for Donegal was a regular topic of conversation. All angles were explored in the cab of that lorry as to how this ambition might be achieved.

Patsy eventually put that question to the then FAI secretary Joe Wickham, a man with a soft spot for Donegal. He didn’t shoot us down. Instead he set Harps a daunting challenge. His stance was that the club wasn’t known nationally and as such had no credibility. But if it could win the FAI Junior Cup, then have sufficient nous to play in the FAI Intermediate Cup, an argument could be advanced for senior soccer for Donegal.

We duly won the FAI Junior Cup and the following season we lost after extra time to Belgrove in a Dublin replay of our FAI Intermediate Cup tie. Many people believed the Belgrove defeat would be the end of the road for the Ballybofey men. In fact it was only the beginning; the final push for senior soccer was underway.

Among those we sought advice from was Frank Curran, a leading sports writer with Derry Journal. He believed it was only logical that Donegal should have senior football and he offered excellent guidance.

Patsy and Fran then set about assembling a group of people who would commit to the project. Plans were laid for a this new dimension to Donegal soccer.

In a book I wrote a few years back – Sporting Greats of the North West, published by Guildhall Press in December 2011 – I looked back at the new groups’ determined struggle to bring senior soccer to Donegal.

‘And so throughout the winter of 1968/69, this tightly knit grouping met in great secrecy – we did not want anyone else to know or indeed alert other clubs to what was going on - to plan the initial steps towards senior soccer for Donegal.

On the morning of Friday 28 March 1969, the news became public via the Derry Journal. Frank Curran had also ensured that Harps’ attempt to get into senior soccer got maximum publicity nationwide. The story made most of the Irish newspapers either side of the border.

Remember in those days it was virtually impossible to gain entry to the senior game. Unless a team collapsed, there was no vacancy. Senior soccer in the Republic of Ireland was an exclusive twelve-team closed shop. There was for that reason a sceptical reaction to the application. The committee that engineered the bid was: Harry McNulty (president), Fran Fields (chairman), Patsy McGowan (secretary), Harry McGowan and Brendan McNulty (joint treasurers) and making up the rest of the committee: Des McLaughlin, Packie Tourish, Richie Kelly, James Barclay, Murdo Morrison and Fergus McNulty.

But could we now persuade the football authorities to take Harps into the League of Ireland? Patsy and I roared off to Dublin in a mini on that same Friday to spend a weekend arguing the case for senior soccer for Donegal. We were determined to canvas all the clubs in the capital and to call with Dundalk and Drogheda on the way home. We also lobbied the Dublin newspapers.

“We were two greenhorns,” McGowan recalled later. But we demanded that something be written about Finn Harps at each media outlet. A lot of people – particularly in Donegal – didn’t take us seriously. And the Dublin newspapers didn’t believe we could pull it off, either. The clannish senior soccer set up in 1960s Ireland barely knew Donegal existed.

On the day of reckoning, Patsy McGowan and Fran Fields went to FAI headquarters at Merrion Square to reinforce the argument for senior soccer for Donegal. After making their case they were banished to the corridor outside to await the outcome. Suddenly, the doors burst open and the press came rushing out. Patsy asked what was happening and one of them shouted: “They have decided to extend the league to fourteen clubs; now they are going to decide who the two new teams will be.” And the waiting game began again, for five new clubs wanted to play in the League of Ireland. Under half an hour later came the news that Finn Harps and Athlone Town had been elected.

The Dublin press were unimpressed. One Dublin journalist told Patsy McGowan: “My God, they have elected a team with a set of goalposts and two junior players to the league. Now I have seen everything.” And there were some in Donegal who also believed that Harps were misguided. They simply couldn’t see the club surviving: but more than 40 years on, the men in blue are still there.’ (Now of course it is 50 years since that audacious bid won the day).