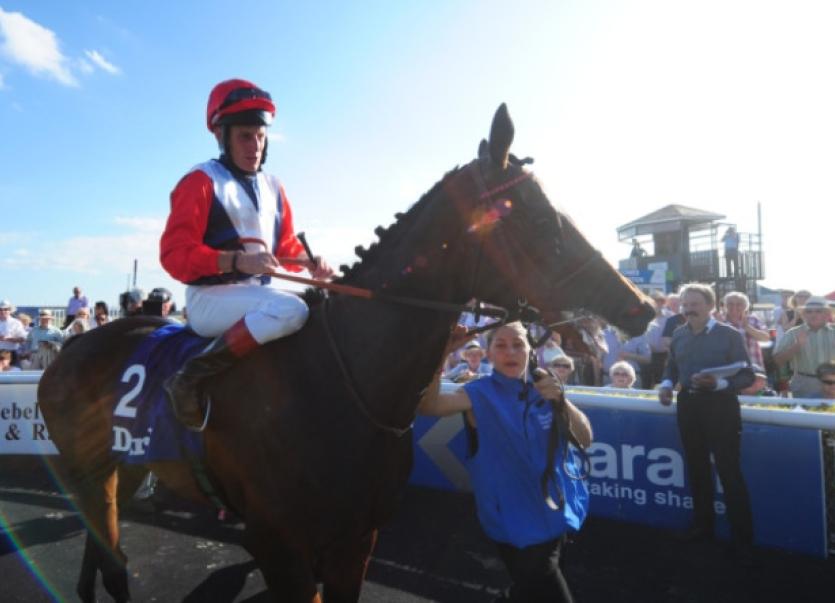 Chicquita, winner of last season’s Irish Oaks, was sold to Peter and Ross Doyle Bloodstock for €6million at the Goffs November Sale in Ireland.

Chicquita, winner of last season’s Irish Oaks, was sold to Peter and Ross Doyle Bloodstock for €6million at the Goffs November Sale in Ireland.

Chicquita won the Curragh Classic by half a length from Venus De Milo in July and also finished second to subsequent Arc heroine Treve in the French equivalent a month earlier.

Also amongst the Makin cnsignment was the 2009 July Cup winner Fleeting Spirit, who is in foal to Galileo and fetched €1.1million.

Song, the first mare in foal to Frankel on sale in Europe, went to John Egan for €1million.

Eddie Lynam landed a double at Dundalk completed by the success of Doc Holliday in the Dundalk Stadium On Facebook Rated Race.

Robbie Downey has been making a name for himself and the claimer was on board the 2-1 favourite, who was following up a narrow success on the track last month.

Fleet Captain surged down the outside with what looked a race-winning charge, but Downey got a fine tune out of Doc Holliday and the three-year-old rallied to score by three-quarters of a length.

Lynam said: “He (Downey) is a great kid. He has a great attitude, rides well and has plenty of confidence. We are on a good run, that’s 41 winners for the year. Normally I look forward to the New Year, but I won’t this year as we’ll be going back to zero. This horse is in again on Wednesday.”

The trainer’s juvenile Mr Good Guy (3-1) was smartly away under Pat Smullen in the Irish Stallion Farms EBF Maiden and grabbed the rails berth to lead all the way.

Odds-on favourite Kernoff threw down a strong challenge on the outside in the straight, but Mr Good Guy pulled out more and was always doing enough to win, getting home by a length.

Lynam said: “He was a good buy for three thousand, although on ratings he was 10lb wrong with the second horse. The way the programme is there is no race left for him, so he goes on his holidays now.”

Smullen doubled up when Willie McCreery’s giant four-year-old debutant Kavaco (9-4) took the Crowne Plaza Hotel Race & Stay Maiden, running on strongly to score by a length and a half after travelling sweetly into the lead on the turn into the straight.

There was a controversial finish to the Dundalk Stadium Light Up Your Night Handicap when Shane Foley forced his way through a narrow gap in the final furlong to win by three-quarters of a length on Rummaging, doing runner-up Antiquus no favours in the process.

Mick Halford’s 6-4 favourite missed the kick and arrived with plenty in the locker but nowhere to go, and the stewards decided the jockey was careless in getting through, suspending him for five days though allowing the result to stand.

Halford said: “They had gone fast, he was drawn one and Shane said he had loads of horse under him turning in. He’s probably best going seven furlongs and he stayed on well. He loves it around here and we’ll be looking at anything from six to seven furlongs.”

Colin Keane led a quarter of a mile out on Terence O’Brien’s 6-1 shot Timjoe in the Christmas Party Nights At Dundalk Apprentice Handicap and the six-year-old galloped clear to beat Juara by two and a half lengths.

The trainer said: “He was probably entitled to do that after his last run here. He disappointed at Wexford the last day - his race was run when he didn’t jump off, and he can be a bit of a rogue. He stays well and he’ll come back here.”

The jockey went on to a double when just getting the better of a desperately close finish to the second division of the Crowne Plaza Leading Jockey & Trainer Championship Handicap on John McConnell’s 3-1 favourite Hoppsan, who beat Gold Tantrum by a nose.

Trifolium returned from a lengthy absence to make a flawless debut over bigger obstacles at Thurles..

Last seen when tailed off in the Fighting Fifth Hurdle at Newcastle a year ago, the Charles Byrnes-trained six-year-old was a very smart novice hurdler.

Third in the 2012 Supreme Novices’ Hurdle and second at the Punchestown Festival, he appears to have retained all of his ability, as jockey Bryan Cooper bounced him out into an early lead in the www.thurlesraces.ieBeginners Chase and he simply devoured his fences.

Trifolium gradually stretched the opposition out and the 2-1 favourite came home unchallenged to win by 10 lengths from Cairdin.

Byrnes said: “From the first day we schooled him he jumped fantastic but he’s had so many problems.

“He’s been done for his wind and he’s had one or two more problems as well.

“Heavy ground seems to be the killer for his wind. We’ll tip away from here and he’ll be entered in whatever two-mile races there are for him.

“It suits him to be out in front and he’s able to keep filling up. He won a good few races two years ago from the front. He should be easy to train after today,”

Imperial Monarch has been retired to stud and will stand under the Coolmore National Hunt banner at the Beeches Stud in County Waterford.

The four-year-old won the Group One Grand Prix de Paris in 2012 and finished sixth in the Dubai Gold Cup in March this year on what transpired to be his final start for Aidan O’Brien.

Imperial Monarch, a son of Galileo, will replace the recently deceased Gold Well at Beeches.

“Imperial Monarch is by the best sire in the world in Galileo and out of a Slip Anchor half-sister to Oscar so he’s got an ideal pedigree for the job. His dam, the Listed winner Ionian Sea, bred no less than 10 winners including four Group One horses,” Beeches manager Robert McCarthy told www.coolmore.com.

“Although he was somewhat overshadowed by his stablemate Camelot at Ballydoyle, he was a very talented racehorse in his own right and would have been the stable star in virtually every other yard.

“He’s a lovely horse with plenty of size and scope and a good walk.”

Hannon to hand over licence

Reigning champion Flat trainer Richard Hannon is to retire at the end of the year.

The Wiltshire-based handler, 68, will hand over the licence to his son, Richard Hannon junior, on January 1.

Speaking on his website,www.richardhannonracing.co.uk, Hannon said: “The worst-kept secret is racing is finally out - I am standing down from New Year’s Day.”

He added: “It was always going to happen, but Richard jnr has served his apprenticeship and you cannot keep him waiting forever. Ian Balding passed the baton to Andrew and Barry Hills did likewise to Charlie, and it is only right that Richard should now take over.

“We thought long and hard as to when to make the announcement, but I wanted to make sure all my owners knew first, especially the Queen, and now that all the yearlings are in for next season it is the appropriate moment to let everyone know.

“Inevitably, people will say that I have retired, but I will still be up and out at first lot and assisting Richard instead of him assisting me.

“It is not my style to lay in bed all morning - I love being with the horses, but these past couple of seasons I have started to wind down and go racing less.

“I will still go to Newbury and Salisbury and also Royal Ascot and Goodwood, but I am now 68 and maybe it is time that I dropped down a gear.”