A result in Dundalk would be bonus territory for Harps 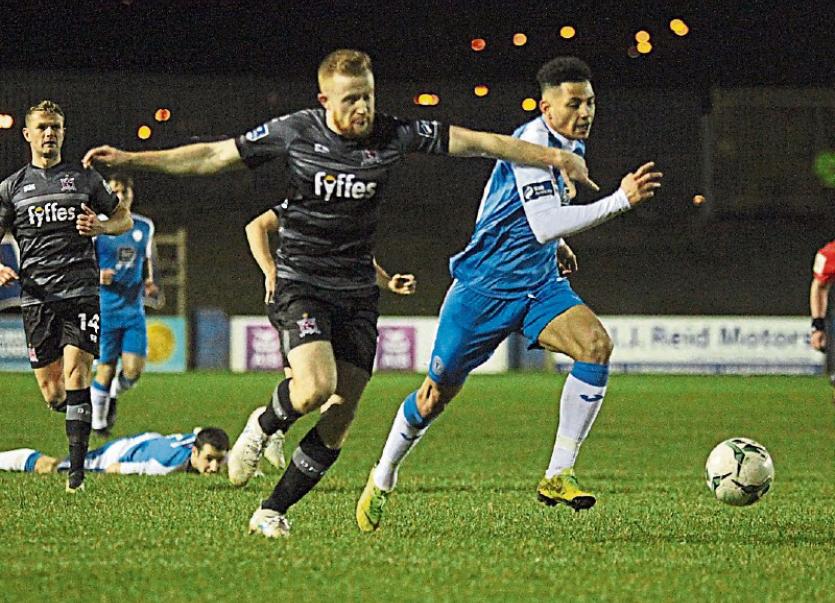 Finn Harps will be hoping that they are not on the end of a Dundalk back-lash when they travel to Oriel Park to tackle the champions tomorrow evening.

The Louth side’s dream of reaching the group stages of the Europa League were shattered on Tuesday night as they lost 3-1 (4-1 on aggregate) against Slovakia champions Slovan Bratislava at the Tallaght Stadium.

So Vinny Perth’s charges must now re-group and it will be all systems go as they now focus fully on trying to win the treble.

How much the European game will have taken out of them remains to be seen, but it will be no surprise if the Lilywhites make a few changes for the visit of Harps and still confident of victory.

After all, Dundalk are unbeaten in four months of domestic soccer!

Dundalk were held to a 1-1 draw by Harps in Ballybofey at the start of the season, but there is a massive gulf between the sides.

In the two league meetings since, Dundalk won 3-0 both at Oriel Park and at Finn Park.

Indeed, in their last ten meetings with Dundalk, Harps have won none, drawn once and lost nine times, scoring one goal and conceding 29.

That shows the scale of the task ahead of Ollie Horgan’s side who have eight games left.

Like Dundalk, Harps go into the game on the back of a cup defeat (having lost 1-0 to Shamrock Rovers last Friday) and following a great run of results in the league.

Dundalk are the only side in the league with better form than Harps in the past five league games.

It should not be forgotten that Harps have won three league games on the spin, against Waterford, Bohemians and Derry City.

And they have moved six points clear of bottom club UCD, albeit with a game more played.

The scale of the improved fortunes for Harps can be measured by the fact that back in April, Harps trailed UCD by eight points!

Harps have a habit of pulling off decent results when not expected, and then failing to get something when most observers feel they should.

Defensively they have tightened up considerably.

But even to extract a point from Oriel Park would be a massive bonus.

As Horgan notes: “It’s a battle. Dundalk are a serious, serious team.”

Harps will go out with the aim of keeping the opposition scoreless for as long as possible, but Harps’ fate come the end of the season will surely be influenced more by other matches in the run-in, and notably the next four games against St. Patrick’s Athletic on Friday, August 28, away to Sligo Rovers and Cork City and then at home to UCD.

Incidentally, tomorrow evening’s game is being broadcast live on eirSport, and kick-off has been switched back to 8pm.