Elijah McGinley makes his mark in the Errigal International Tour 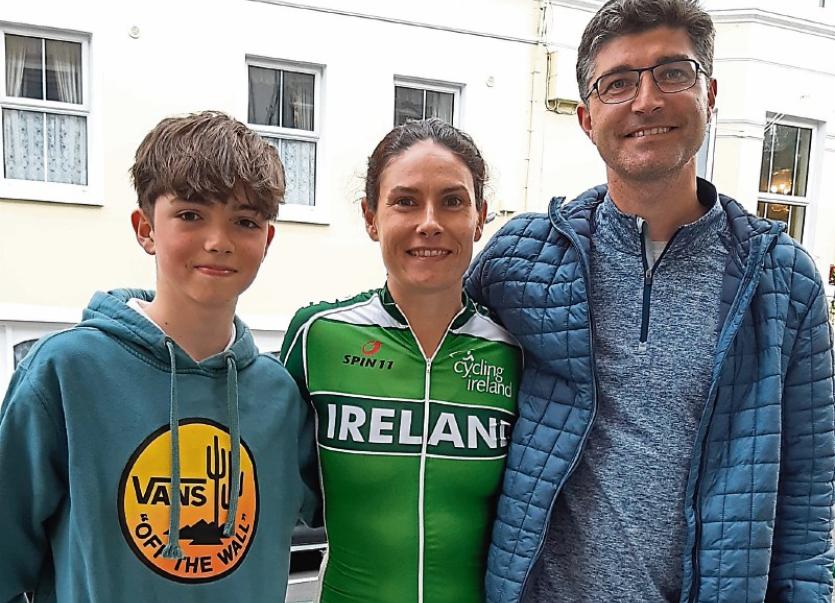 A young Donegal cyclist put in a phenomenal performance with his finishing place at the recent Errigal International Youth Tour.

Elijah McGinley from Churchill finished in third place overall in the U-14 age group in the prestigious and renowned Youth Tour staged in Donegal at the beginning of the month.

Elijah, a student at Loreto College in Milford, was one of only four Irish riders inside the top ten in a field of 67 other competitors from England, Scotland, Wales, the Isle of Man and the continent.

This year’s Errigal International Youth Tour - the eighth year in-a-row it has been hosted by the Errigal Cycling Club - was held over the three days of the August Bank holiday weekend. (Saturday, Sunday and Monday).

The tour consisted of four stages, two road races in and around Churchill, a time trial in Dunlewey and a criterion in the Gweedore Industrial Estate in Derrybeg.

The Errigal International Youth Tour is for boys and girls at U-12, U-14 and U-16 and in all 240 cyclists competed in the 2019 Tour, hosted by the Errigal Cycling Club.

Elijah, the son of David and Liz McGinley, is one of two Donegal cyclists to claim third place in the Tour. Conor Gallagher from Glenswilly finished in 13th place overall in the U-16 race and was the third U-15 year-old to finish. They are both members of the Errigal Cycling Club.

“Charlie has done a phenomenal job with the boys, Elijah, Conor and his brother Cathal and especially Elijah,” said David McGinley, father of Elijah, a former Donegal minor and U-21 footballer and a winner of a number senior championships with St Eunans.

“Conor and Cathal are well established cyclists and have represented Ireland, but cycling is all new for Elijah.

“He is only cycling four years and this year’s third place finish in the Youth Tour is by far and away his greatest achievement.

“He has literally come from nowhere to a third place finish in an International race. It is a phenomenal achievement for Elijah and Charlie.

“He had been competing all year with older and bigger and stronger riders and it stood to him in this year’s tour and he raced very well over the three days.

“The two road race stages were in around Churchill here. They were on a hilly course which suited him because he is a tough, gritty rider and of course he knows the roads around here well.

“The time trial stage of the tour was three kilometres long and was based in Dunlewey with the start at Roarty’s Garage car park and racing over the back of Errigal road towards Mount Errigal.

“And the criterium stage, which was normally run through the streets of Letterkenny, was moved this year to the Gweedore Industrial Estate due to the roadworks in Letterkenny.

Conor Gallagher, who has represented Ireland in the past, has been selected on the Irish U-16 team to compete in a race in Austria at the end of this month (August).

Elijah took up cycling a mere four years ago after trying out athletics.

“His interest in cycling came from watching his cousins Cathal and Conor competing in races and in the Errigal International. He tried it out and he liked it and it is his sport now and he enjoys it,” explained David.

“Obviously he is still growing but he is slight in build and not as big and as strong as some of the other lads he is competing against.

“But he is menatally very tough and gritty and is really very committed. He trains five to six days a week and he trains what I call smart.”

Elijah has his first outing since the Errigal International this weekend when he competes in the National Youth Championship in Mullingar.

The championships, which are being hosted by the Lakeland Wheelers Cycling Club, is over two days (Saturday and Sunday).

From a strong Gaeilic football tradition, both his father David and his grandfather John Teague McGinley, from Glencolmcille, played with Donegal and are club championship winners with St Eunans and Naomh Columba respectively.

Elijah has no interest in football, his sport is cycling.

It is not clear where the cycling comes in the family but he is a cousin of the English-born Irish gold medal Paralympian Katie-George Dunlevy,

Katie-George is one of the leading paracyclists in the world. She was a gold medal winner at the Rio Olympics and along with her tandem cycle partner Eve McChrystal, is a reigning world champion.

Her father, John, hails from Mountcharles and his mother was Cassie McGinley from Glencolmcille, an aunt of Elijah’s grandfather John Teague McGinley